“An attack against a mosque in a West Bank village early on Wednesday ignited a fire that destroyed its first floor, the village’s mayor said, blaming Jewish settlers for the attack.

The fire broke out before dawn in the village of Mughayer, north of Ramallah, said Mayor Faraj al-Naasan. He said efforts of residents and Palestinian fire services to quell the blaze succeeded only in saving the building’s second floor.

The mayor said he had no doubt that Jewish settlers were responsible, citing a previous settler attack against another mosque in the village two years ago and frequent settler attacks against vehicles and olive groves there.

“Only Jewish settlers would do this,” al-Naasan said”

Importantly, the Israeli fire services have just released its investigation and found that the most likely cause of the blaze at the west bank mosque was not an arson attack by Israeli settlers, but an electrical problem which caused the fire.

On December 15, the Associated Press issued this article which reports:

Separately, Israeli officials said a blaze last month at a West Bank mosque most likely resulted from an electrical problem, not arson.

The Nov. 12 fire destroyed the first floor of the mosque in the village of Mughayer, north of Ramallah and residents accused Jewish settlers of setting the blaze.

Fire Services spokesman Asaf Abras said Monday that fire investigators, working with Israeli police and the Shin Bet security service, believe the fire almost certainly was an accident. He said investigators found no combustible materials or graffiti at the site. Such items would point to settler vandalism.

But the village’s mayor, Faraj al-Naasan, disputed the findings. He said residents have “strong reason” to believe it was a settler attack because they have carried out other violence in the past, including a fire at another mosque in town several years earlier.

HonestReporting Canada reached out to the Globe and Mail, asking that in the interests of accuracy and fairness, that the Globe publish an update to this incident, specifically this AP report, to inform its readership of the latest development on this matter.

We are pleased to report that on December 17, the Globe published the following article subsequent to our request: 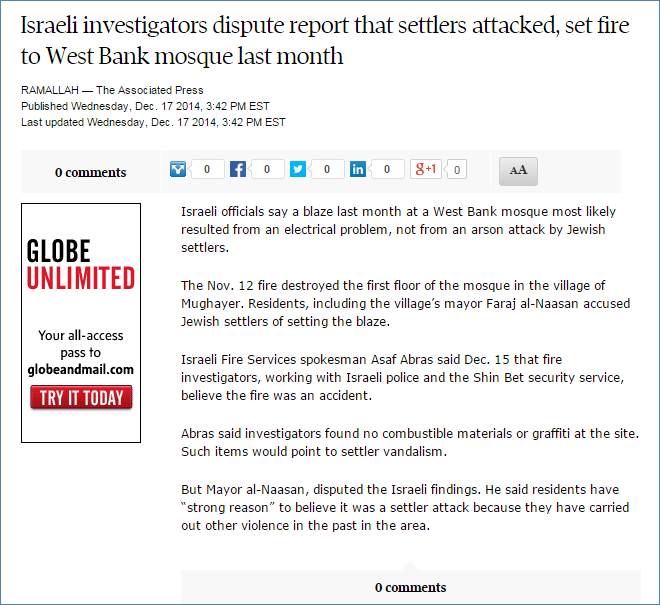