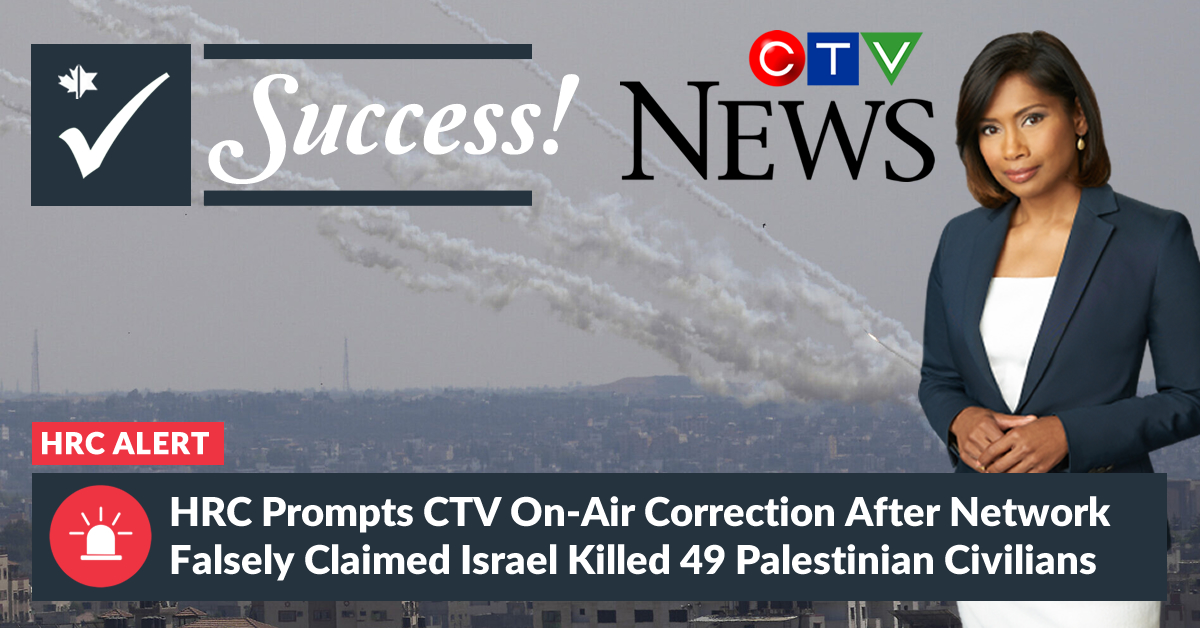 Our top priority is to hold Canada’s news media accountable for bias, inaccurate reporting and other breaches of journalistic standards that create false, if not malicious, narratives about Israel and the Jewish people.

The lies that contribute to growing antisemitism often begin in the media – fortunately, we are experts at combating lies and fighting for accuracy, fairness and promoting basic truths about Israel.

After all, we know that what’s reported today, becomes domestic and foreign policy tomorrow and that dishonest reporting has the potential to fan the flames of hatred.

That’s why we are on the front lines.

Recently, HRC prompted an important and precedent-setting success in holding Canadian broadcasters accountable for their (mis)reporting about Israel.

On October 14, CTV News broadcast a rare on-air correction where it formally retracted its false reporting on August 15 that Israeli air strikes killed 49 Palestinian civilians in Gaza, whereas in fact, 1/3 of the deaths were caused by misfired rockets launched by Palestinian terrorists from Islamic Jihad.

Faced with CTV’s initial reluctance to atone for its journalistic transgressions, HRC lodged a complaint with the Canadian Broadcast Standards Council which led to this mea culpa which was aired on national television.

CTV now knows that it cannot be evasive and immune to legitimate criticism and that it’s duty-bound to rectify its false reporting.

This on-air correction serves as an important precedent on this issue and a reminder to all Canadian media outlets that not only is HonestReporting Canada doggedly monitoring its news coverage of Israel, we will relentlessly work to hold them accountable.