On December 2, HonestReporting Canada filed a formal grievance with CTV News regarding a CTV Toronto report it aired on the previous night’s broadcast which falsely claimed that all protesters assembled at a recent Jewish National Fund event honouring Prime Minister Stephen Harper, were there solely to oppose Harper’s support for Israel and the JNF. In reality, the protesters had many gripes with the PM and were criticizing Canada’s prime minister for his environmental policies, First Nations issues, his political leanings, etc., not just for his support for Israel and JNF.

CTV correspondent Calvin To’s December 1 report saw him erroneously assert the following: “Andrea: This protest is about 200 large is taking place outside the Metro Toronto Convention Centre. Inside the Prime Minister is attending the annual gala for the Jewish National Fund. They are expected to honour him with a plan to name a bird sanctuary in Israel after him. The Prime Minister is of course expected to make an announcement of his own, he’s expected to announce his first ever trip to Israel as prime minister, but the people here are taking aim with that protesting against his close ties with Israel as well as unwavering commitment and support, and affiliation with this organization, the Jewish National Fund.”

Mr. To then included two clips of anti-Israel protesters rebuking Israel with one saying that Israel has done “criminal” acts.

To watch this report please click here, here or here or on the image below: 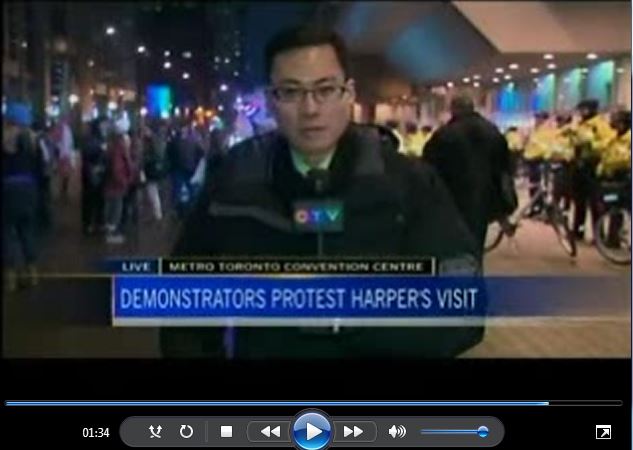 Mr. To falsely claimed that all of the people in attendance at this protest were condemning Harper for his pro-Israel policies and his ties with JNF, however, the following news reports note that the audience had many different grievances and reasons for protesting:

Interestingly, in the backdrop of Mr. To’s report, you hear and see aboriginal protesters who have signs clearly marking land rights grievances and who are chanting and drumming. We doubt they have a beef with Harper’s Mideast policies. Likewise, another CTV report aired the same day at 4:20pm by Karman Wong acknowledged that the protest was comprised of “30 different groups” with “different signs” including a “a no fracking group, First Nations supporters, etc… who don’t agree with Harper’s environmental record, his policies with respect to the support of certain policies by Israel in dispossessing Palestinian lands…”

As a result we asked CTV Toronto to issue an on-air apology to remedy the harm caused by this report. We are pleased to report that on December 2, CTV Toronto aired the following one minute on-air apology on its prime time slot at 6:20pm:

CTV Anchor Michelle Dubé: “The Prime Minister will get a break from the Senate scandal next month when he makes his first ever visit to Israel. Harper made the announcement at a gala in Toronto last night and that’s not all. He serenated the crowd with some old time rock’n roll backed by his band, the PM played keyboards and performed a string of classics. He was guest of honour at the dinner hosted the Jewish National Fund, and it was raucous outside the Convention Centre to where protestors made their voices heard. On our newscast last night we indicated that the demonstrators were opposed to the prime minister’s support of Israel and the Jewish National Fund. In fact, the crowd was made up of over 30 different political and environmental organizations protesting various government policies. We apologize for any confusion our original report may have caused.”

To watch the apology, please click here or on the image below: 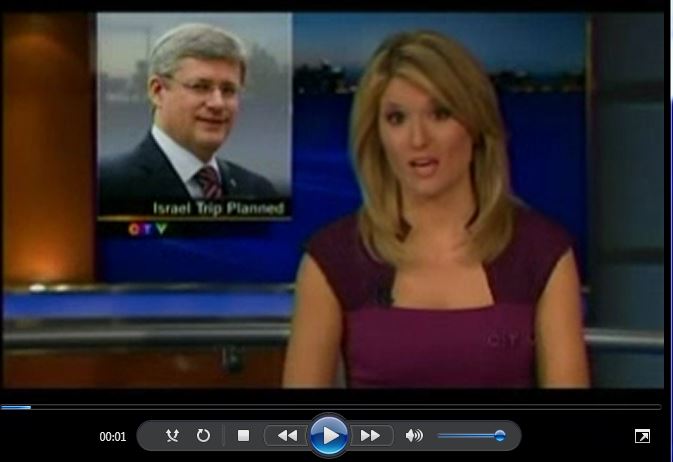 “While there was no intent to mislead viewers, we agree the information provided by the reporter during the live report was incomplete,  and did not accurately represent the participants, or the purpose of the demonstration.  As such,  CTV News clarified the report during Monday evening’s newscast, stating that the demonstration was comprised of more than 30 political and environmental groups, voicing their opposition to various government policies.  We also apologized for any confusion the original report may have caused.”

HonestReporting Canada commends CTV for the various steps the network took to swiftly remedy this situation.

As we conveyed to CTV, we are not of the opinion that there was an intention by this reporter to mislead viewers. Nevertheless, that was the direct outcome of this report for which CTV, we hope, has recognized that it made serious errors at the reporting, editing, and producing levels.