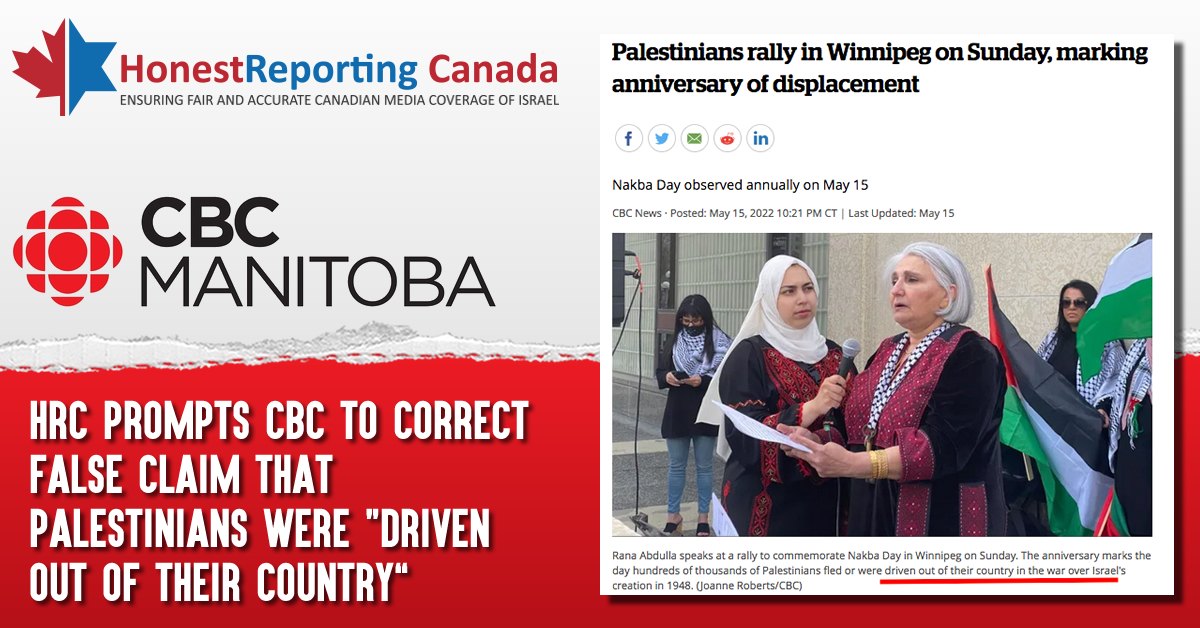 On May 16, HonestReporting Canada filed a complaint with CBC Manitoba regarding an article entitled: “Palestinians rally in Winnipeg on Sunday, marking anniversary of displacement,” which contained inaccurate and unfair information.

The article reported that:

“Rana Abdulla speaks at a rally to commemorate Nakba Day in Winnipeg on Sunday. The anniversary marks the day hundreds of thousands of Palestinians fled or were driven out of their country in the war over Israel’s creation in 1948.”

As is commonly known, the land prior to Israel’s creation was under the control of British Mandate Palestine, not the people who now regard themselves as Palestinians. In fact, in 1948, Jews and Arabs were both regarded as Palestinians. To assert that Palestinians were “driven out of their country”, was inaccurate and historical revisionism.

Untold by CBC, in 1948, five Arab armies launched a war to annihilate the newly formed State of Israel. In this war of aggression which Israel defended itself against, Palestinian-Arabs were indeed displaced, but to claim they were forced to flee is one-sided and unfair. Historical records confirm that many left at the behest of Arab leaders who told them to vacate their homes and to make way for marauding Arab armies to arrive to wage war against the Israelis.

It was concerning that CBC, unlike CTV News’ coverage, did not include comments from the official representatives of the Jewish community in Winnipeg about the Nakba Day rally. A statement issued by the Jewish Federation of Winnipeg said:

“On Sunday, a Nakba Day rally will be held on the steps of City Hall in Winnipeg, with similar demonstrations planned across the country. The Jewish Federation of Winnipeg continues to be in contact with the Winnipeg Police Service, who will be on-site to ensure the safety and security of those in attendance, and to ensure hateful rhetoric is not on display. We thank them in advance for providing a safe environment for all citizens. Antisemitism and anti-Israel rhetoric has no place on the streets of Winnipeg, or in Canada. We condemn any public display to delegitimize and demonize the State of Israel. As long as public protests or marches are not violent, hateful or antisemitic in nature, we respect people’s rights to express their viewpoints – even though we may not agree with them. We do not feel that counter-protest is an effective tool to change minds – it only serves to amplify the intent behind the original protest, and to inflame tensions between both sides… If you still feel compelled to attend, please exercise safety. Gustavo Zentner, President and Elaine Goldstine, CEO.”

We called on CBC to take immediate corrective action and to include this statement by the Federation about the Naqba Day rally.

In response to our complaint, we’re pleased to note that CBC Manitoba upheld our concerns. In an email sent to HRC, John Bertrand, CBC Manitoba’s Managing Director said:

“You suggested that CBC’s referring to the Palestinians being “driven out of their country” was inaccurate because the territory was a British Mandate for Palestine in 1948.  Despite the broad definition of country, this was not as precise as it could be, therefore, we amended the story to read “driven from their homes.”

While we appreciate the corrective action taken by CBC, we were dismayed that our public broadcaster declined to quote Winnipeg’s Jewish Federation in their article. According to Bertrand:

“We have also reviewed the statement you forwarded from the Jewish Federation of Winnipeg. We did not include it as it did not add context to the story. It speculates that Antisemitism may be part of Nakba Day and condemns it in advance of the day’s events. In none of what we observed on site did we observe Antisemitic behaviour. It was therefore not reported in our story and did not warrant a response.”

For context, the CBC article included the fact that for Israel this time in history is celebrated as the birth of the nation.”

And there you have it: CBC is of the subjective view that the statement from Winnipeg’s Jewish Federation “did not add context to the story,” whereas implicitly, CTV felt that this statement clearly added necessary context for its viewing audience to understand the hateful nature of this event.

Nakba Day rallies across Canada have featured anti-Israel and antisemitic rhetoric, but CBC does not think Canadians need to know this fact.