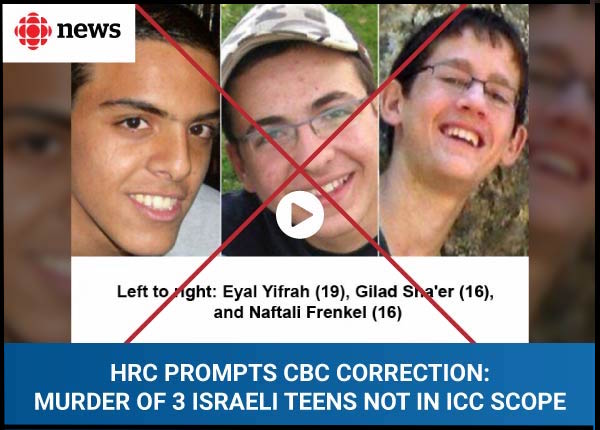 A March 3 CBC Radio report on the International Criminal Court’s (ICC) announcing that it will open up a “war crimes” investigation on Israel and Palestinians “militants” saw freelance journalist Irris Makler erroneously state the following:

She (ICC Prosecutor Fatou Bensouda) will also investigate the Palestinians for the kidnap and murder of three Israeli soldiers in May 2014.”

You can listen to the report here or immediately below:

This statement was patently false. The ICC statement made no mention of this at all. Instead, the statement led by saying the following:

Today, I confirm the initiation by the Office of the Prosecutor (”Office”) of the International Criminal Court (”ICC” or the ”Court”) of an investigation respecting the Situation in Palestine. The investigation will cover crimes within the jurisdiction of the Court that are alleged to have been committed in the Situation since 13 June 2014, the date to which reference is made in the Referral of the Situation to my Office.”

Why is this date so important? As the Times of Israel observed: “The June 13, 2014, date is significant. Palestinian terrorists kidnapped and murdered three Israeli teenagers in the Gush Etzion area of the West Bank the day before. By asking for an investigation beginning on June 13, the Palestinians ensured that the ICC will not look into the killing of Eyal Yifrach, Gil-ad Shaer, and Naftali Fraenkel.” 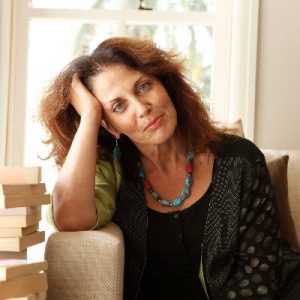 This one statement by Ms. Makler (pictured right) had 3 errors: 1) The ICC will not investigate this kidnapping and murder of these 3 Israelis. 2) The kidnappings and murders happened on June 12, one day before the ICC’s convenient scope of investigation, not May 2014 and 3) the three Israelis killed were not soldiers, they were just teens, two of which were 16 and another 19.

Ms. Makler presented a narrative of false equivalency which portrayed the ICC investigation as being even-handed and balanced, except that there is no symmetry as the ICC is a kangaroo court which is carrying out a political witch hunt against Israel.

On March 17, in response to an HonestReporting Canada complaint sent on March 3, the following correction was published on CBC’s website:

March 16, 2021: On CBC Radio’s The World This Hour, in a March 3 story regarding the International Criminal Court’s decision to open up a war crimes investigation on Israel and Palestinians, we incorrectly reported that the court would investigate the Palestinians for the kidnap and murder of three Israeli soldiers in May 2014. In fact, the three Israelis were not soldiers and they were killed on June 12, 2014. That date is outside the scope of the court prosecutor’s investigation, which is examining allegations since June 13, 2014.”

While we appreciate and applaud the CBC for issuing this correction and for sensitizing its journalists about their error, it’s disappointing that the CBC declined to broadcast this correction on its radio airwaves. It’s standard procedure that a correction should appear on the same platform and program that the error was originally stated on. The CBC’s failing to set the record straight on the air opens the CBC up to the appearance that it was trying to reduce the visibility of the correction by relegating it only to a low traffic corrections page, which is very hard to find on the CBC website.

Alas, that’s the CBC for you, but let this example illustrate how important it is to bring factual errors to the media’s attention and to demand that remedial action is taken.