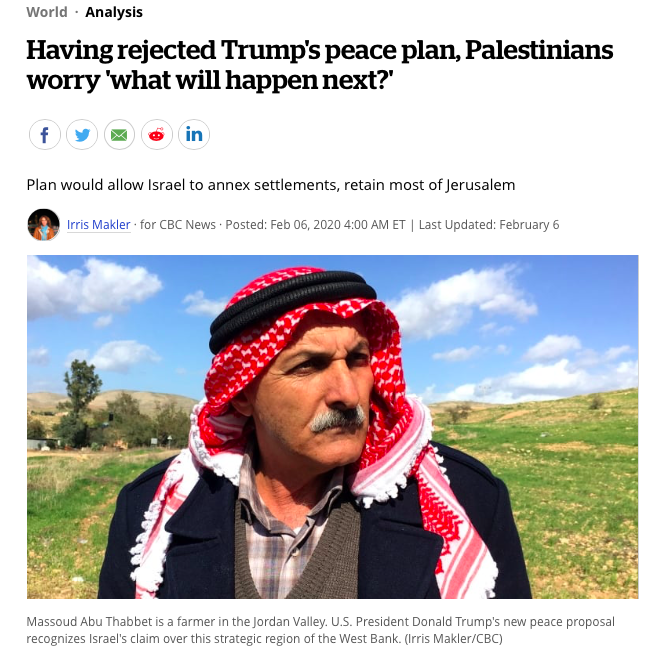 In the report, Ms. Makler stated the following which HonestReporting Canada took issue with in a complaint filed with CBC: (emphasis added)

Jerusalem is home to the third-holiest site in Islam, the Noble Sanctuary, where the al-Aqsa mosque sits. The site is also holy to Jews, who refer to it as the Temple Mount. For Palestinians, al-Aqsa is a national as well as a religious shrine. They insist that any future Palestinian state would have East Jerusalem as its capital and would include the mosque. Palestinians say the status of Jerusalem is the main obstacle to their acceptance of Trump’s plan.”

What the CBC’s reporter failed to mention – which is very significant – is that the Temple Mount isn’t just one of Israel’s and the Jewish people’s holy sites, but its most holy site. If the CBC is going to mention that the Noble Sanctuary is Islam’s third-holiest site, our public broadcaster must also refer to the Temple Mount as the Jewish people’s holiest site. It’s an area where the first and second temples were built, and where its prophesied that the third and final temple will be built.

In response to our complaint, CBC promptly and commendably issued the following clarification to acknowledge that the Temple Mount is Judaism’s holiest site:

Here’s a before and after of the amended text of this article:

Before: “Jerusalem is home to the third-holiest site in Islam, the Noble Sanctuary, where the al-Aqsa mosque sits. The site is also holy to Jews, who refer to it as the Temple Mount.”

After: “Jerusalem is home to the third-holiest site in Islam, the Noble Sanctuary, where the al-Aqsa mosque sits. Known also as the Temple Mount, the site is considered the holiest place of worship for Jews.”

Ms. Makler also interviewed a Palestinian farmer for her article who expressed concern that the Trump peace plan will impede his ability to pray in Jerusalem. As we told the CBC,  per the status quo, and per the peace plan and Trump’s pronouncements, any Muslim will be free to worship at the Al Aqsa Mosque with King Hussein from Jordan being the custodian. We conveyed to the CBC that this context should be mentioned. Importantly, non-Muslims are banned from entering the Al Aqsa Mosque and only a small amount of Israeli Jews are occasionally granted access to the Temple Mount. Regretfully, the CBC declined to include this important context in this report saying it wasn’t relevant and not necessary. We respectfully disagree.