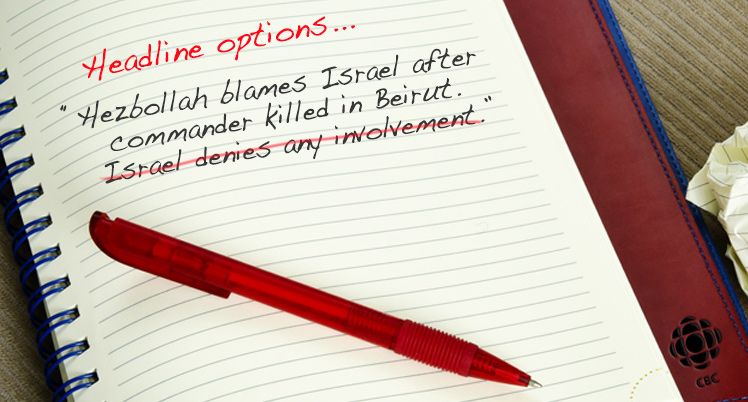 It’s an all too common occurrence that when a terrorist is killed in the Middle East, whether in an extra-judicial killing, a “work accident” in the form of a munition that prematurely explodes, or even of natural causes; Israel is blamed and the mainstream media then take great pains to headline baseless allegations while failing to acknowledge Israel’s strenuous denials.

Such was the case yesterday when CBC.ca published the following article to its website (“Hezbollah blames Israel after commander killed in Beirut”) which told only the Hezbollah account of an incident where its operative, Hussein al-Laqis, was shot in the head outside his home in southern Beirut. For the record, al-Laqis, was killed just 30 minutes after Hezbollah leader Hassan Nasrallah blamed Saudi Arabia for violence in Lebanon.

This CBC.ca article failed to acknowledge that Israel vehemently denies any responsibility for this attack, nor did it provide context that there are other groups who have already taken credit for the attack. Instead, the  report featured a Hezbollah statement which said the following: “The Israeli enemy is naturally directly to blame… this enemy must shoulder complete responsibility and repercussions for this ugly crime and its repeated targeting of leaders and cadres of the resistance.”

Importantly, the Washington Post reports that even Lebanese residents and Hezbollah supporters aren’t so quick to blame Israel for the assassination of this senior Hezbollah leader. According to the Post: “‘No one believes it was Israel,’ said a Hezbollah supporter who lives in the Hezbollah-controlled southern suburbs of Beirut. The movement is accusing Israel ‘because it wants to avoid Sunni-Shiite discord,’” he said.

As we relayed to CBC editors, CTV.ca featured the following context in its article : “Israeli Foreign Ministry spokesman Yigal Palmor denied any involvement. ‘Israel has nothing to do with this incident,’Palmor said. ‘These automatic accusations are an innate reflex with Hezbollah. They don’t need evidence, they don’t need facts, they just blame anything on Israel.'” CTV also fronted Israel’s denial in its headline (“Hezbollah leader gunned down outside Beirut home; Israel denies involvement”) a matter we encouraged CBC to follow suit with.

Interestingly, CBC.ca appended a  TV news report to this online article which acknowledged Israel’s denials and how a “relatively unknown group” claimed responsibility. Regrettably CBC.ca failed to feature this necessary context and in the interests of fairness, we asked for CBC.ca to amend this article. We are pleased to report that this CBC.ca report now features a new main and sub-headline which now says: (“Hezbollah commander killed outside Beirut home: Israel says it had no involvement in killing” and the article itself now acknowledges Israel’s denial of responsibility three times throughout with a lengthly quote from Israel’s spokesperson, just as CTV.ca did.

While it’s regrettable that CBC once again failed to report fairly on an incident affecting Israel, at the very least when notified of its journalistic shortcomings, positive efforts were undertaken to redress the situation.