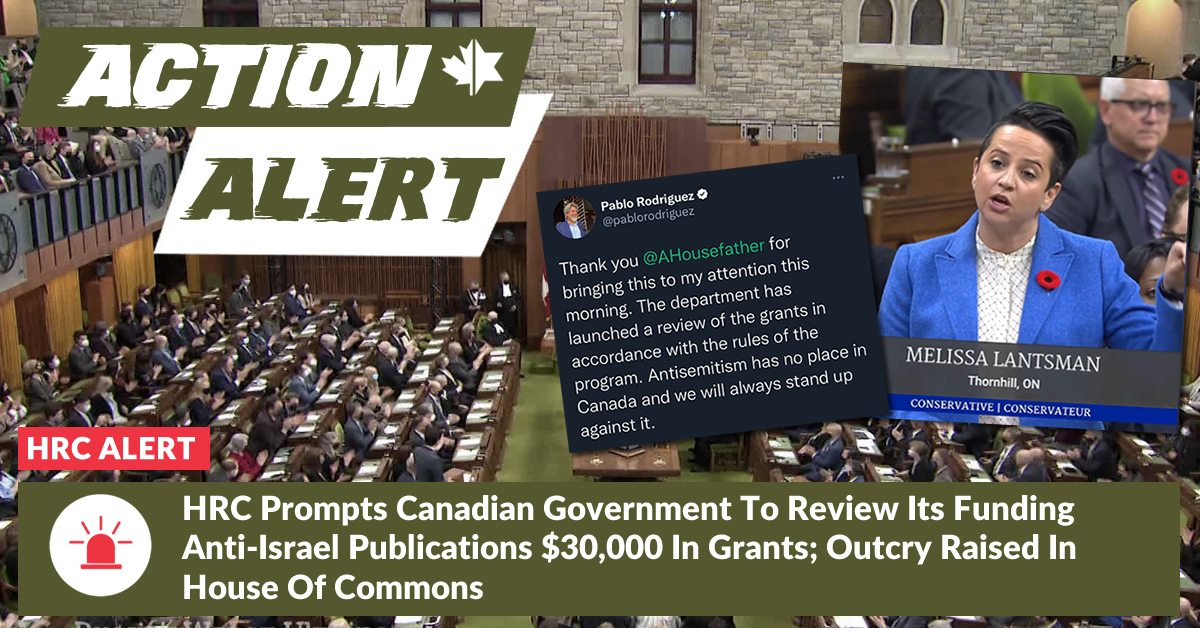 In an exclusive report on November 2, HonestReporting Canada (HRC) revealed that the federal government had awarded nearly $30,000 in grants to two anti-Israel publications, who in our view had engaged in antisemitism.

The alert, which was based on data compiled from a 2021 report from Canadaland entitled “Which Media Benefitted from The Trudeau Government’s Covid-19 Funds?”, found that Meshwar Media, an Arabic-language newspaper based in Mississauga with a long history of spreading anti-Israel and antisemitic propaganda, had received $2,000, while Adbusters, a Vancouver-based anti-capitalist magazine that also has a rich history of anti-Israel and anti-Jewish bigotry, received $27,497.

HRC also sent a letter to Pablo Rodriguez, Liberal Member of Parliament for Patrimoine and Minister of Canadian Heritage, to register our concerns.

Subsequent to HonestReporting Canada’s alert sent to our 50,000 subscribers across the country, the response was almost immediate and condemnation went viral.

On the morning of November 2, we published our alert on HonestReporting Canada’s Twitter account and within 21 minutes, Anthony Housefather, Liberal Member of Parliament for Mount Royal in Quebec, and Parliamentary Secretary for Public Services & Procurement, responded to HRC’s Tweet, writing that “We are looking into this right away. The Minister acted immediately this morning when we were advised.”

Thank you @AHousefather for bringing this to my attention this morning. The department has launched a review of the grants in accordance with the rules of the program. Antisemitism has no place in Canada and we will always stand up against it. https://t.co/UDQ4cJ6Mkb

Later that afternoon, Minister Pablo Rodriguez shared Housefather’s Tweet and added that “The department has launched a review of the grants in accordance with the rules of the program. Antisemitism has no place in Canada and we will always stand up against it.”

Outrage against the grants to Meshwar Media and Adbusters wasn’t just limited to social media.

On November 4, Melissa Lantsman, Member of Parliament for Thornhill and Deputy Leader of the Conservative Party, rose in the House of Commons to express disbelief that the grants were awarded.

“When the Diversity Minister was confronted with his department’s funding of a notorious antisemite, Laith Marouf, he swore that it was a mistake and that it would never happen again, even though he covered it up for a month. Now we know the Minister’s sincerest promise was nothing more than lip service to this house, to his caucus and to Canadians. Yesterday, we found out that there was more funding from the Department of Heritage. Nearly $30,000 were given to two news outlets that call for the elimination of Israel and that perpetuate the dangerous hate against Jews. This is freely available on the internet. Either nobody bothered to check or, more likely, nobody cared. These aren’t unfortunate mistakes, they’re not even incompetence. The repeated actions by a government that’s coming dangerously close to complicity with the worst antisemitism by spending Canadian tax dollars to proliferate it. We have a problem in this country. Canadians deserve to know about it, Conservatives are here to stop it and more members of the Liberal caucus need to stand up to it.” Lantsman told colleagues in the House of Commons.

While Meshwar’s editor, Nazih Khatatba, denied that he or his newspaper promote antisemitic views – telling the Western Standard that: “We are not hostile to the Jews… Rather, we oppose the Israeli occupation and Israel’s politicians, which is based on occupation, apartheid and the extermination of the Palestinian people,” there are manifold examples showing extremely problematic content being disseminated.

Setting aside his mendacious allegation that Israel is trying to “exterminate” (commit genocide) of Palestinians, past incidents include a 2015 article in Meshwar Media claiming that Judaism is a terrorist religion and that violence is inherent to the Jewish faith. Also, a 2014 blog post by Khatatba denied that the Holocaust took place, and most recently in October, Khatatba shared a video to his personal Facebook account which promoted the lie that Jews are plotting an international conspiracy of world domination, and which featured a clip of Nazi leader Adolf Hitler making this allegation as supposed proof.

The Western Standard also quoted Adbusters co-founder Kalle Lasn as saying that he stands “wholeheartedly with the Palestinians in their fight for freedom and dignity.”

In recent months, Adbusters produced an article – reminiscent of antisemitic claims of global Jewish control of the international media – which referenced Israel’s alleged “media toadies” and claimed that the Jewish State’s so-called illegal occupation began in 1948, clearly suggesting that the entire existence of the Jewish People exercising self-determination in their historic homeland is illegal.

On the heels of the Laith Marouf controversy, when the Beirut-based founder of the Community Media Advocacy Centre (CMAC) – who had made many antisemitic comments on social media – was shown to have collected more than $600,000 in federal contracts since 2015, HonestReporting Canada thanks Parliamentary Secretary Housefather and Minister Rodriguez for their prompt attention to the issue of Meshwar Media and Adbusters receiving taxpayer money and for reaffirming Canada’s commitment to oppose antisemitism in all its forms. We await the results of the federal government’s investigation and to look forward to hearing what remedial measures will be put in place to ensure future Canadian funding doesn’t go to news outlets that engage in anti-Israel and anti-Jewish discrimination.