A December 30 editorial falsely asserted that Israel was building “new settlements” and a January 2 letter to the editor erroneously claimed that the new U.S. aid to package to Israel was $10-billion over the next 10 years.

Contrary to the Globe’s editorial, Israel hasn’t built “new settlements” in many years. Instead, Israel has built new homes in existing settlements, what’s commonly referred to as expansion to account for the natural growth of the Israelis who live there. As well, U.S. aid to Israel over the next 10 years will be $38-billion.

Here are the corrections which were published on page A2 today: 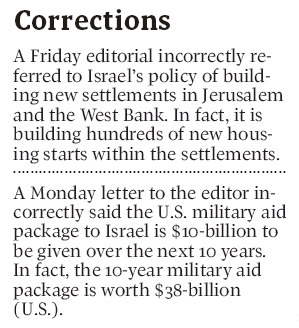 We thank the Globe and Mail for promptly and professionally issuing these corrections to set the record straight.