On May 22, The Western Standard conducted a profile of HRC’s efforts to fight media bias against Israel. It’s reproduced in full below with permission.

Canadian news cycles are rife with reports on racism, intolerance and initiatives to combat hate.

The media diligently pays attention to these serious matters. So much, you’d think Canada is a wretched cauldron of racism.

It isn’t. But there are serious problem areas.

One of them is the media. 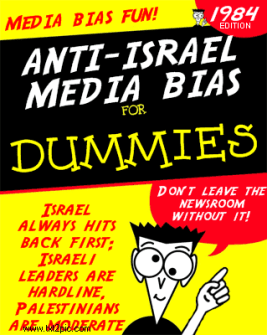 Embedded in the pack are some with a penchant for targeting Israel and Jews.

They incite intolerance and racism, things they claim to abhor.

Their commentary and stories are saturated with bias or outright agenda-driven lies.

The worst offenders feed at the public trough. The CBC receives $1.2 billion annually from taxpayers. Other outlets who churn out anti-Semitic drivel grabbed a chunk of the $595 million taxpayer bailout to select media outlets.

No one in media hasn’t made mistakes.

However, when “mistakes” become common reporting practice someone should pay attention.

HonestReporting Canada (HRC) does. It counters disinformation campaigns against Israel.

The findings of this non-governmental organization dedicated to fair and accurate media coverage of Israel are disturbing.

It has filed more than 3,000 complaints with English and French media.

“In the past 17 years, we’ve prompted over 2,350 corrections, clarifications, retractions, apologies, etc., from Canadian news providers and have an overall success rate of just shy of 80%,” says Mike Fegelman, executive director of HRC.

Some reporters and commentators have chronic trouble with facts. Certain outlets are repeat offenders.

“For example, our public broadcaster, the CBC. Though we may notify a particular executive or editor about an error their staff has made, we often find that the same error is repeated, perhaps on another program by another journalist,” says Fegelman.

“In the realm of news reporting, there’s lots of attrition and assignment changes, requiring our organization to constantly sensitize journalists about the need to report objectively, accurately and to strive for balance in their reporting.”

CBC spends almost $1 million on a five-person strategic intelligence department. With all that high-paid intelligence amassed in one department you’d think someone would fix the problem by strategically sending a memo saying: ‘Stop lying about Jews.”

Here’s a radical idea: Media could do research to decipher fact from the propaganda Israel’s enemies feed them.

CBC didn’t do that when reporting on those heartless Israelis and COVID-19 vaccines – but one hideous example of polluting the public mind.

“In this past year, we’ve repeatedly had to bring our concerns to the CBC’s attention after their various news programs and programmers who adopted the canard that Israel was depriving Palestinians of the COVID vaccine,” says Fegelman.

“What was constantly overlooked by CBC journalists was the fact that Israel is under no obligation to vaccinate Palestinians as the Oslo Accords stipulate that the Palestinian Authority is required to look after the health care of Palestinians,” said Fegelman.

Israel did vaccinate 120,000 Palestinians working in Israel or in settlements and aims to vaccinate all Palestinians over the age of 16. But that was too positive to report.

“Ultimately, the outcome saw thousands upon thousands of people misled into thinking that Israel deprived Palestinians of vaccines, which we felt fed into an age-old anti-Semitic trope from the times of the Black Plague when Jews were accused of engineering the disease or of withholding the cure,” says Fegelman.

Let the howling begin. Go study history and the Bible, then we’ll talk. (Are we still allowed to say Bible out loud in Canada?)

“When Israel’s detractors employ this empty rhetoric they purposefully do so to tarnish Israel’s reputation,” says Fegelman. “Is Israel perfect? No, far from it and more must be done to promote Arab minority rights, but we should not be obtuse to how Israel is the only liberal democracy in the Middle East in which its 20% Arab minority enjoys full equal rights before and under the law.”

Anyone know how many Jews hold esteemed positions in Gaza?

Surprisingly, Fegelman believes most media strive to be unbiased but “various impediments interfere with their goals.”

“Defensive military efforts become wars of aggression, Israeli peace overtures are dismissed, and terrorism is ignored or treated as an acceptable method of statecraft,” says Fegelman.

“The enemies of Israel today spend millions of dollars and employ hundreds of personnel to get ‘their side’ of the story out. Photographs are doctored, fake news stories are staged, and Palestinian ‘fixers’ are used as sources of information by overworked reporters trying to capture a complex story in just a few soundbites.”

Slobodian is a Western Standard columnist based in Manitoba
lslobodian@westernstandardonline.com