HRC Op-Ed Published In Ottawa Citizen: “Israel Has Found Its Own Voice And Needn’t Apologize For It”

On November 10, the Ottawa Citizen published a column by Professor Andrew Cohen entitled: “Why America’s support for Israel is eroding” which argued that a growing number of Jews in the United States, and the Biden government, find themselves less “reflexively” supportive of Israel.

Not only is this unsupported by the facts, the implication – that Israel somehow should be answerable to the United States – is patronizing to the Jewish state. Support for Israel is not only not weakening in the West, but even if it was, Israel cannot be expected to outsource its security to another country just to maintain popular support.

On November 16, the Citizen published an op-ed by HonestReporting Canada Executive Director Mike Fegelman which pointed out that Israel has found its own voice and needn’t apologize for it… Israel — like all countries — needs to craft its policies for the benefit of its own citizens first.”

Our commentary can be read in full immediately below or via the Ottawa Citizen’s website. 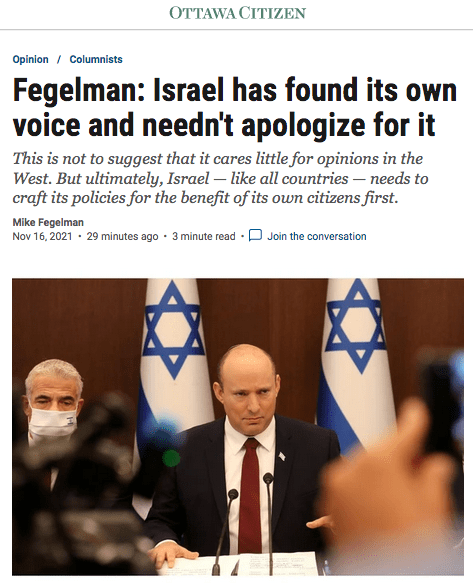 In his Ottawa Citizen column, Andrew Cohen posits that even though longtime Israeli Prime Minister Benjamin Netanyahu is no longer in office, his successor, Naftali Bennett, is continuing the trend of allegedly weakening ties between Israel and the United States, particularly among the next generation of Jews.As Cohen writes: “The view of Israel is changing in the United States, particularly among younger Jews. They are less committed to Israel than their parents. After the Gaza campaign last May, that feeling has intensified.”There are two major problems with this claim.Firstly, there is little evidence that on any fundamental level, attachment to Israel has significantly weakened between Jews in the United States – or Canada for that matter – and the State of Israel.The large majority of Jews in the United States, across all denominations, report positive views of Israel, according to a recent Pew Research Centre survey. Suggestions of a trans-Atlantic divorce seem entirely exaggerated. Canadian Jews, who are less assimilated than their American neighbours, report even higher levels of attachment to Israel.Jews aren’t a major outlier, either. In fact, a large majority of Americans say they are supportive of Israel, with about 75 percent of respondents to a Gallup poll saying they view Israel positively – virtually unchanged since a similar survey in 1991. 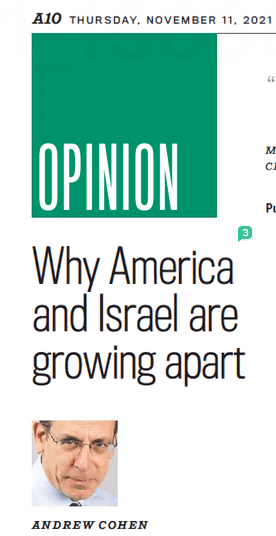 Clearly, then, the bottom is not falling out on support for Israel in North America, either from Jews or from society at large. Individual Israeli politicians or Israeli policies may be viewed differently, but when it comes to Israel’s right to exist as a Jewish state in safe and secure borders, there is widespread support.But the bigger issue with Cohen’s claim isn’t just that it’s unsupported by the available data, but the underlying assumption that Israel, as a sovereign state, needs to adhere to public opinion from the other side of the world.Cohen argues that “among progressive Democrats in Congress, there’s growing pressure to revisit the relationship with Israel, long America’s ally,” pointing out that under then-US President Barack Obama, the United States gifted Israel with $3.8 billion (US) in annual military aid.But as Cohen acknowledges, this military aid not only represents a diminishing amount of Israel’s annual economic output – about one percent, currently – but that, in larger diplomatic and other terms, quoting the New York Times, Israel had “quietly cultivated, and may have achieved, effective autonomy from the United States.”It’s true that, as Israel’s economy grows, and its neighbours sign peace deals with the Jewish state, the country’s reliance on the United States as its military and diplomatic protector wean. And that means Israel, as a sovereign state with its own currency, capital and foreign policy, can determine its own policies vis-à-vis Jewish communities in Judea & Samaria (commonly called the West Bank), the Iranian nuclear threat, and other issues.  Cohen appears to take issue with Israel finding its own voice, and daring to challenge the United States on these topics, but it’s a sign of maturity and growth on Israel’s part as it exercises its own agency and self-determination, which may or may not be in line with any other country.Jewish history over the last century has shown that when it comes to protection, Jews simply cannot outsource their security to any other party but themselves. Israel maintains a close relationship with the United States, as it does with Canada, the United Kingdom, the European Union, and a growing list of countries in the West and throughout the world, due to shared interests and values.But that does not mean that the Jewish state cannot disagree with its allies, nor should Israel be so terrified of the potential, but thus far unrealized, of shifting sands of US popular opinion or politicians to determine its own outcome.All this is not to suggest that Israel cares little for opinions in the West, whether from Jews or in general. Israel takes great pains to explain its positions, often in the face of significant misinformation. But ultimately, Israel – like all countries – needs to craft its own policies and positions which benefit its citizens first and foremost. Both Cohen, the media and progressive politicians in the United States need to recognize this fact, because this is the new reality, and it’s a sign of Israel’s maturity, not weakness.Mike Fegelman is Executive Director of HonestReporting Canada, a non-profit organization ensuring fair and accurate Canadian media coverage of Israel (www.HonestReporting.ca)