On December 30, HRC secured commentary space in the Kingston Whig-Standard setting the record straight about what took place in Deir Yassin many decades ago and to counter several unsubstantiated allegations leveled at Israel by Louis Delvoie, a contributor to the Whig-Standard and a fellow at the Centre for International and Defence Policy at Queen’s University. Please find an op-ed by HRC Executive Director Mike Fegelman appended immediately below:

In war, the saying goes, the first casualty is the truth. Referring to the battle to capture Deir Yassin during the 1948 Israeli War of Independence, Louis Delvoie, a fellow in the Centre for 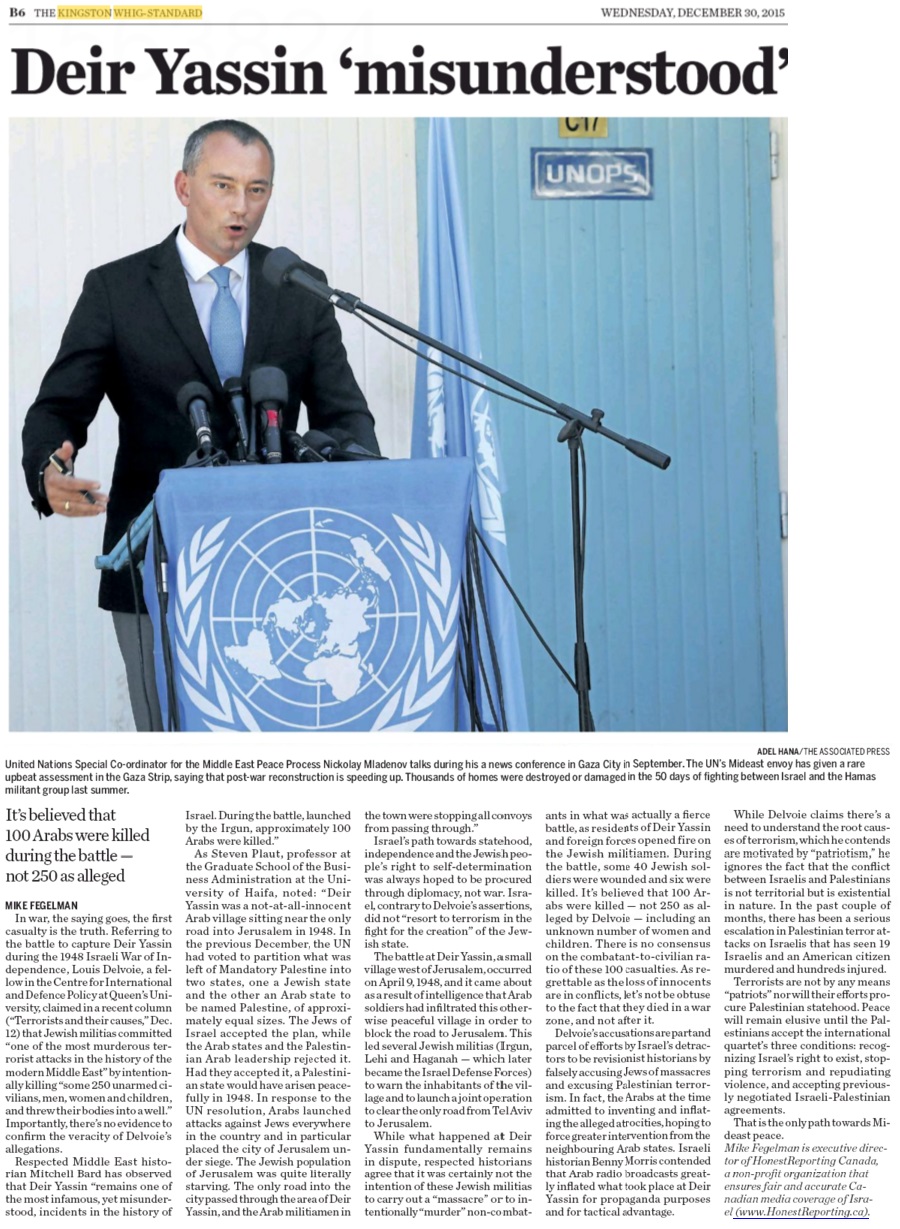 International and Defence Policy at Queen’s University, claimed in a recent column (“Terrorists and their causes,” Dec. 12) that Jewish militias committed “one of the most murderous terrorist attacks in the history of the modern Middle East” by intentionally killing “some 250 unarmed civilians, men, women and children, and threw their bodies into a well.” Importantly, there’s no evidence to confirm the veracity of Delvoie’s allegations.

Respected Middle East historian Mitchell Bard has observed that Deir Yassin “remains one of the most infamous, yet misunderstood, incidents in the history of Israel. During the battle, launched by the Irgun, approximately 100 Arabs were killed.”

As Steven Plaut, professor at the Graduate School of the Business Administration at the University of Haifa, noted: “Deir Yassin was a not-at-all-innocent Arab village sitting near the only road into Jerusalem in 1948. In the previous December, the UN had voted to partition what was left of Mandatory Palestine into two states, one a Jewish state and the other an Arab state to be named Palestine, of approximately equal sizes. The Jews of Israel accepted the plan, while the Arab states and the Palestinian Arab leadership rejected it. Had they accepted it, a Palestinian state would have arisen peacefully in 1948. In response to the UN resolution, Arabs launched attacks against Jews everywhere in the country and in particular placed the city of Jerusalem under siege. The Jewish population of Jerusalem was quite literally starving. The only road into the city passed through the area of Deir Yassin, and the Arab militiamen in the town were stopping all convoys from passing through.”

Israel’s path towards statehood, independence and the Jewish people’s right to self-determination was always hoped to be procured through diplomacy, not war. Israel, contrary to Delvoie’s assertions, did not “resort to terrorism in the fight for the creation” of the Jewish state.

The battle at Deir Yassin, a small village west of Jerusalem, occurred on April 9, 1948, and it came about as a result of intelligence that Arab soldiers had infiltrated this otherwise peaceful village in order to block the road to Jerusalem. This led several Jewish militias (Irgun, Lehi and Haganah — which later became the Israel Defense Forces) to warn the inhabitants of the village and to launch a joint operation to clear the only road from Tel Aviv to Jerusalem.

While what happened at Deir Yassin fundamentally remains in dispute, respected historians agree that it was certainly not the intention of these Jewish militias to carry out a “massacre” or to intentionally “murder” non-combatants in what was actually a fierce battle, as residents of Deir Yassin and foreign forces opened fire on the Jewish militiamen. During the battle, some 40 Jewish soldiers were wounded and six were killed. It’s believed that 100 Arabs were killed — not 250 as alleged by Delvoie — including an unknown number of women and children. There is no consensus on the combatant-to-civilian ratio of these 100 casualties. As regrettable as the loss of innocents are in conflicts, let’s not be obtuse to the fact that they died in a war zone, and not after it.

Delvoie’s accusations are part and parcel of efforts by Israel’s detractors to be revisionist historians by falsely accusing Jews of massacres and excusing Palestinian terrorism. In fact, the Arabs at the time admitted to inventing and inflating the alleged atrocities, hoping to force greater intervention from the neighbouring Arab states. Israeli historian Benny Morris contended that Arab radio broadcasts greatly inflated what took place at Deir Yassin for propaganda purposes and for tactical advantage.

While Delvoie claims there’s a need to understand the root causes of terrorism, which he contends are motivated by “patriotism,” he ignores the fact that the conflict between Israelis and Palestinians is not territorial but is existential in nature. In the past couple of months, there has been a serious escalation in Palestinian terror attacks on Israelis that has seen 19 Israelis and an American citizen murdered and hundreds injured.

Terrorists are not by any means “patriots” nor will their efforts procure Palestinian statehood. Peace will remain elusive until the Palestinians accept the international quartet’s three conditions: recognizing Israel’s right to exist, stopping terrorism and repudiating violence, and accepting previously negotiated Israeli-Palestinian agreements.

That is the only path towards Mideast peace.