In an op-ed published in the Canadian Jewish News on June 7, HRC Executive Director Mike Fegelman exposes how the Canadian media are playing into Hamas’ hands and counts down 10 of the most egregious examples of media bias that HRC has confronted.

Our full op-ed can be found below. 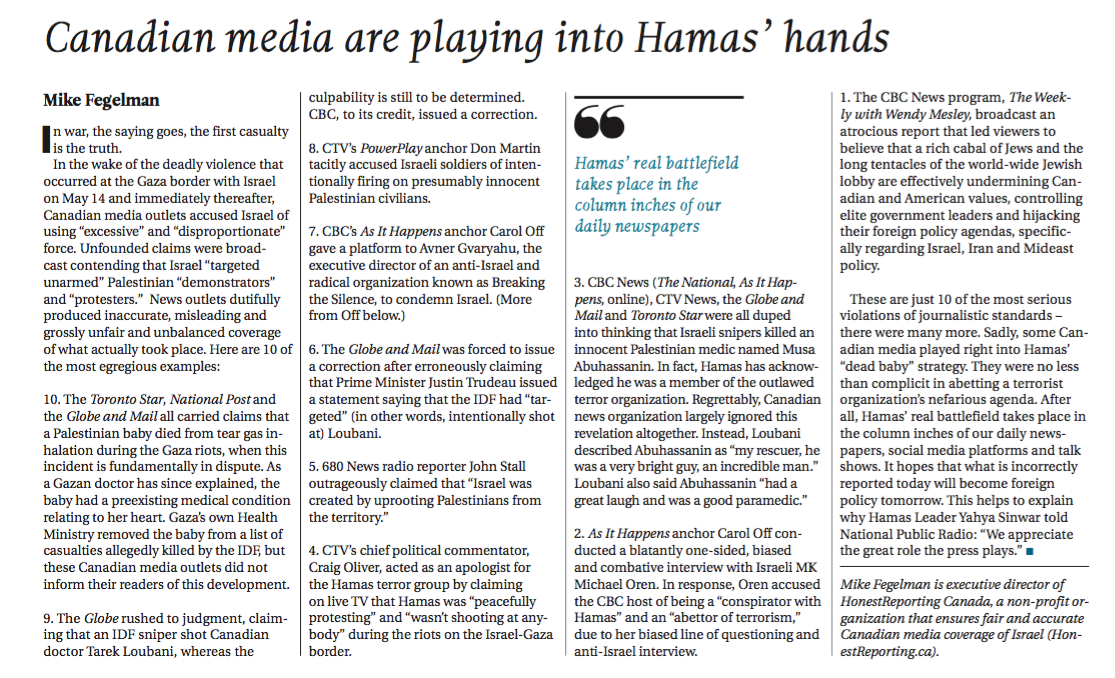 In war, the saying goes, the first casualty is the truth.

In the wake of the deadly violence that occurred at the Gaza border with Israel on May 14 and immediately thereafter, Canadian media outlets accused Israel of using “excessive” and “disproportionate” force. Unfounded claims were broadcast contending that Israel “targeted unarmed” Palestinian “demonstrators” and “protestors.” News outlets dutifully produced inaccurate, misleading and grossly unfair and unbalanced coverage of what actually took place. Here are 10 of the most egregious examples:

10. The Toronto Star, National Post and the Globe and Mail all carried claims that a Palestinian baby died from tear gas inhalation during the Gaza riots when this incident is fundamentally in dispute. As a Gazan doctor has since explained, the baby had a preexisting medical condition related to her heart. Gaza’s own Health Ministry removed the baby from a list of casualties allegedly killed by the IDF, but these Canadian media outlets did not inform their readers of this development.

9. The Globe rushed to judgment, claiming that an IDF sniper shot Canadian doctor Tarek Loubani, whereas the culpability is still to be determined. CBC, to its credit, issued a corrective. 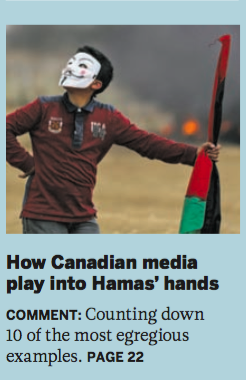 7. CBC As It Happens Anchor Carol Off gave a platform to Avner Gvaryahu, the executive director of the anti-Israel and radical organization known as “Breaking the Silence” to condemn Israel. (More from Ms. Off below.)

6. The Globe and Mail was forced to issue a correction after erroneously claiming that Prime Minister Justin Trudeau issued a statement saying that the IDF had “targeted” (in other words, intentionally shot at) Dr. Loubani.

4. CTV’s Chief Political Commentator, Craig Oliver, acted as an apologist for the Hamas terror group by claiming on live TV that Hamas was “peacefully protesting” and “wasn’t shooting at anybody” during the riots on the Israel-Gaza border.

3. CBC News (The National, As It Happens, Online), CTV News, the Globe and Mail and Toronto Star were all duped into thinking that Israeli snipers killed an innocent Palestinian “medic” named Musa Abuhassanin. In fact, Hamas has acknowledged he was a member of the outlawed terror organization. Regrettably, Canadian news organization largely ignored this revelation altogether. Instead, Dr. Tarek Loubani described Abuhassanin as “my rescuer, he was a very bright guy, an incredible man.” Loubani also said Abuhassanin “had a great laugh and was a good paramedic.”

2. CBC As It Happens anchor Carol Off conducted a blatantly one-sided, biased and combative interview with Knesset member and deputy minister Michael Oren. In response, Oren accused the CBC host of being a “conspirator with Hamas” and an “abettor of terrorism” due to her biased line of questioning and anti-Israel interview.

1. CBC News “The Weekly” with Wendy Mesley broadcast an atrocious report that led viewers to believe that a rich cabal of Jews and the long tentacles of the world-wide Jewish lobby is effectively undermining Canadian and American values, controlling elite government leaders and hijacking their foreign policy agendas, specifically regarding Israel, Iran, and Mideast policy.

These are just 10 of the most serious violations of journalistic standards – there were many more. Sadly, some Canadian media played right into Hamas’ “dead baby” strategy. They were no less than complicit in abetting a terrorist organization’s nefarious agenda. After all, Hamas’ real battlefield takes place in the column inches of our daily newspapers, social media platforms, and talk shows. It hopes that what is incorrectly reported today will become foreign policy tomorrow. This helps to explain why Hamas leader Yahya Sinwar told National Public Radio: “we appreciate the great role the press plays.”

HRC in Times of Israel: “Where’s The Outrage:...