In the TorStar newspapers the Hamilton Spectator and Waterloo Record today, HRC Research Analyst Noah Lewis argues that Canada should put a moratorium on funding UNRWA, the corrupt UN Palestinian relief agency tarred for having ties to terrorists, whose staff author and distribute virulently antisemitic materials, and which perpetuates the conflict by promising that all refugees (and their descendants) will one day “return” to Israel.

The so-called “right of return” is a code word for the Palestinian’s aspirational dream of destroying Israel and the Jewish state through a demographic ticking bomb with the influx of millions of Palestinian Arabs into Israel.

Read our op-ed in full below: 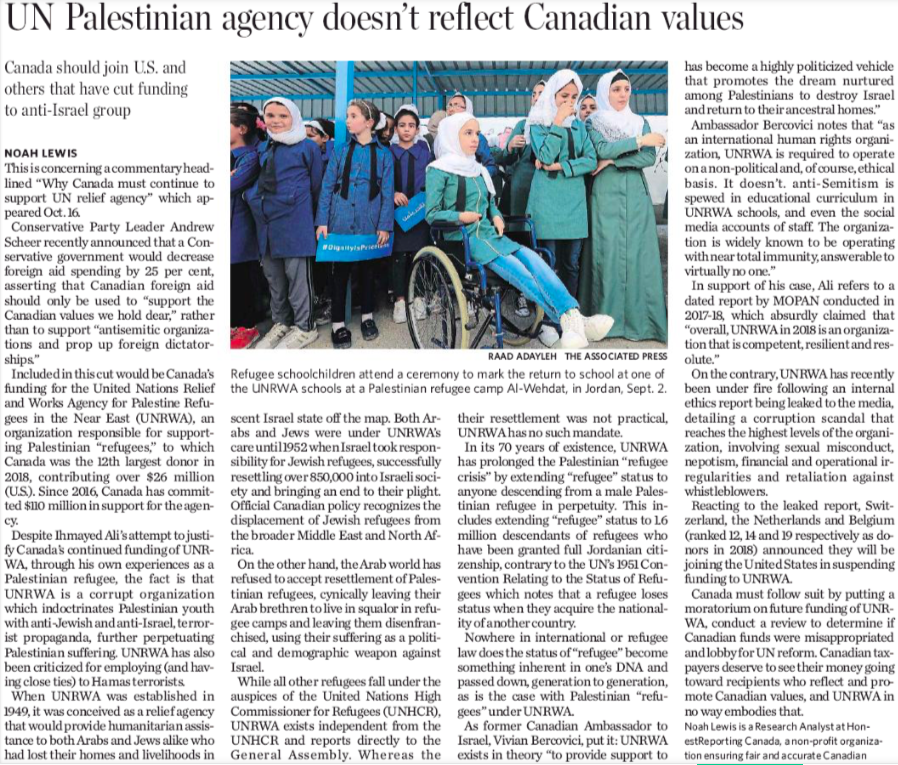 UNRWA in no way embodies our Canadian values

Earlier in October, Conservative Party Leader Andrew Scheer announced that a Conservative government would decrease foreign aid spending by 25 percent, asserting that Canadian foreign aid should only be used to “support the Canadian values we hold dear,” rather than to support “anti-Semitic organizations and prop up foreign dictatorships.”

Included in this cut would be Canada’s funding for the United Nations Relief and Works Agency for Palestine Refugees in the Near East (UNRWA), the UN organization responsible for supporting the Palestinian “refugees”, to which Canada was the thirteenth largest donor in 2018, contributing over $26 million USD.

Despite Ihmayed Ali’s attempt to justify Canada’s continued funding of UNRWA, through his own experiences as a Palestinian refugee, the fact of the matter is that UNRWA is a corrupt organization which indoctrinates Palestinian youth with anti-Jewish and anti-Israel, terrorist propaganda, further perpetuating Palestinian suffering and has been criticized for employing and having close ties to Hamas terror operatives.

When UNRWA was established in 1949, it was initially conceived as a relief agency that would provide humanitarian assistance to both Arabs and Jews alike who had lost their homes and livelihoods in Israel’s War of Independence, wherein pan-Arab armies tried to wipe Israel off the map. Both Arabs and Jews were under UNRWA’s care until 1952 when Israel took responsibility for Jewish refugees, successfully resettling over 850,000 into Israeli society and bringing an end to their plight. Official Canadian policy recognizes the displacement of Jewish refugees from the broader Middle East and North Africa.

On the other hand, the Arab states have refused to accept resettlement of the Palestinian refugees, cynically leaving their Arab brethren to live in squalor in refugee camps and leaving them disenfranchised and without rights, using their suffering as a political and demographic weapon against the State of Israel.

While all other refugees fall under the auspice of the United Nations High Commissioner for Refugees (UNHCR), UNRWA exists independently from the UNHCR and reports directly to the General Assembly. Whereas the UNHCR has a clear mandate for assisting in the resettlement and assimilation of refugees when their resettlement was not practical, UNRWA has no such mandate.

In its seventy years of existence, UNRWA has prolonged the Palestinian “refugee crisis” by extending “refugee” status to anyone descending from a male Palestinian refugee in perpetuity. This includes extending “refugee” status to the 1.6 million descendants of refugees who have been granted full Jordanian citizenship, contrary to the UN’s 1951 Convention Relating to the Status of Refugees which notes that a refugee loses that status when they acquire the nationality of another country.

It should be noted that nowhere in international or refugee law does the status of “refugee” become something inherent in one’s DNA and passed down generation to generation as is the case with Palestinian “refugees” under UNRWA.

As former Canadian Ambassador to Israel, Vivian Bercovici, clearly put it: UNRWA exists in theory “to provide support to Palestinian refugees: food, shelter, education, health care. The organization has become a highly politicized vehicle that promotes the dream nurtured among Palestinians to destroy Israel and return to their ancestral homes.”

Ambassador Bercovici notes that “as an international human rights organization, UNRWA is required to operate on a non-political and, of course, ethical basis. It doesn’t. Antisemitism is spewed in educational curriculum in UNRWA schools, and even the social media accounts of staff. The organization is widely known to be operating with near total immunity, answerable to virtually no one.”

In support of his case for UNRWA, Mr. Ali refers to a dated report by MOPAN conducted in 2017-18, which absurdly claimed that “overall, UNRWA in 2018 is an organisation that is competent, resilient and resolute.”

On the contrary, most recently UNRWA has been under fire as a result of an internal ethics report also from 2018 being leaked to the media, detailing a corruption scandal that reaches the highest levels of the organization, involving sexual misconduct, nepotism, financial and operational irregularities and retaliation against whistleblowers.

In reaction to the leaked report, Switzerland, the Netherlands and Belgium (ranked 12, 14 and 19 respectively as donors in 2018) announced they will be joining the United States in suspending their funding to UNRWA.

Accordingly, Canada must follow suit and put a moratorium on future funding of UNRWA and conduct a review to determine if Canadian funds were misappropriated. Canada should use its good offices to lobby for UN reform. Canadian taxpayers deserve to see their money going towards recipients who reflect and promote the values we as Canadian hold dear, and UNRWA in no way embodies that. 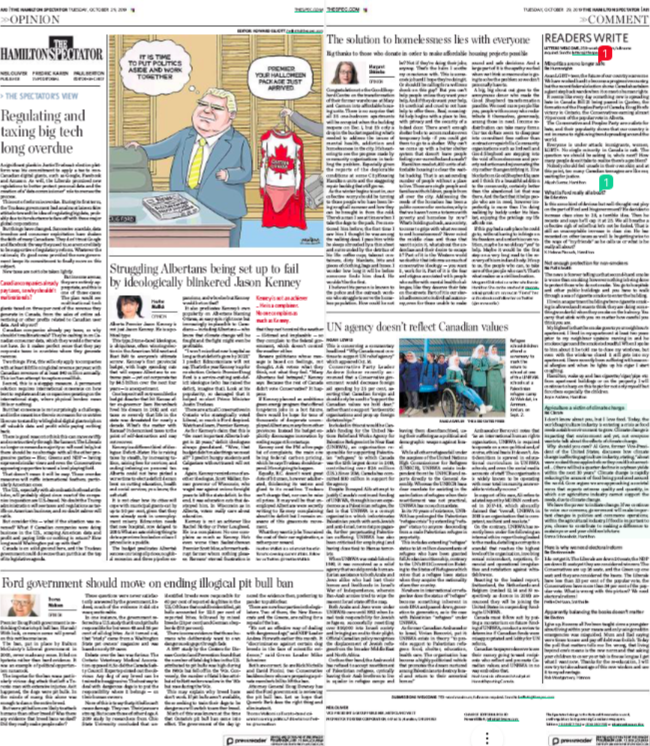