HRC Op-Ed In Peterborough Examiner: Israel Has Been The Jewish Homeland For Millennia

In an op-ed published in the Peterborough Examiner today, HRC responded to a Rosemary Ganley commentary on January 23 which failed to assign any blame or responsibility to the Palestinians themselves (or to the Arab world at large) for their situation. Only Israel was maligned and was the recipient of condemnation.

HRC set the record straight in our rebuttal commentary. You can see it below or on the Examiner’s website here. 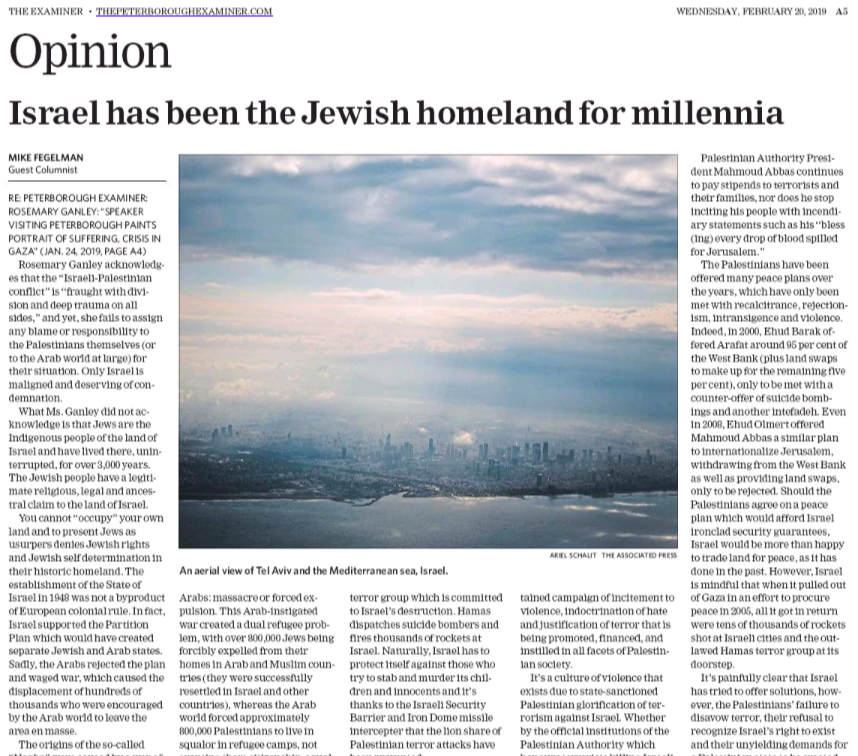 Rosemary Ganley acknowledges that the “Israeli-Palestinian conflict” is “fraught with division and deep trauma on all sides,” and yet, she fails to assign any blame or responsibility to the Palestinians themselves (or to the Arab world at large) for their situation. Only Israel is maligned and deserving of condemnation.

What Ms. Ganley did not acknowledge is that Jews are the indigenous people of the land of Israel and have lived there, uninterrupted, for over 3,000 years. The Jewish people have a legitimate religious, legal and ancestral claim to the land of Israel.

You cannot “occupy” your own land and to present Jews as usurpers denies Jewish rights and Jewish self determination in their historic homeland. The establishment of the State of Israel in 1948 was not a by-product of European colonial rule. In fact, Israel supported the Partition Plan which would have created separate Jewish and Arab states. Sadly, the Arabs rejected the plan and waged war, which caused the displacement of hundreds of thousands who were encouraged by the Arab world to leave the area en masse.

The origins of the so-called “Naqba” were caused by a war of annihilation launched against the nascent Israeli state by neighbouring Arab armies.

It was in 1948 that the Arabs refused to establish a state side-by-side with the Jewish one. While Israel successfully fought off five united Arab armies, one of two fates awaited the Jews whose cities were captured by the Arabs: massacre or forced expulsion. This Arab-instigated war created a dual refugee problem, with over 800,000 Jews being forcibly expelled from their homes in Arab and Muslim countries (they were successfully resettled in Israel and other countries), whereas the Arab world forced approximately 800,000 Palestinians to live in squalor in refugee camps, not granting them citizenship, equal rights, etc. In 1967, Israel fought off another genocidal Arab effort and came to acquire various Arab-held lands, some of which Jews have an un-renounced legitimate claim to, such as Judea and Samaria.

Also untold by Mr. Ganley is that the Gaza Strip is run by the ruthless and despotic Hamas terror group which is committed to Israel’s destruction. Hamas dispatches suicide bombers and fires thousands of rockets at Israel. Naturally, Israel has to protect itself against those who try to stab and murder its children and innocents and it’s thanks to the Israeli Security Barrier and Iron Dome missile intercepter that the lion share of Palestinian terror attacks have been prevented.

Importantly, there are many conflicts and disputes throughout the world where individuals don’t resort to violence to achieve their political goals, despite any impasses. Terror doesn’t occur in a vacuum and terrorists are born from nurture, not nature. Fanning the flames and provoking this recent terror war is a sustained campaign of incitement to violence, indoctrination of hate and justification of terror that is being promoted, financed, and instilled in all facets of Palestinian society.

A culture of violence that exists due to state-sanctioned Palestinian glorification of terrorism against Israel. Whether by the official institutions of the Palestinian Authority which honours terrorists killing Israeli civilians as “heroes,” where school textbooks feature maps where Israel is purged from the region, and whose media call Jews “barbaric monkeys [and] wretched pigs,” Israel’s neighbours and supposed “partners for peace” are nurturing a climate of hatred against Israeli Jews.

Palestinian Authority President Mahmoud Abbas continues to pay stipends to terrorists and their families, nor does he stop inciting his people with incendiary statements such as his “bless(ing) every drop of blood spilled for Jerusalem.”

The Palestinians have been offered many peace plans over the years, which have only been met with recalcitrance, rejectionism, intransigence and violence. Indeed, in 2000, Ehud Barak offered Arafat around 95% of the west bank (plus land swaps to make up for the remaining 5%), only to be met with a counteroffer of suicide bombings and another intifada. Even in 2008, Ehud Olmert offered Mahmoud Abbas a similar plan to internationalize Jerusalem, withdrawing from the west bank as well as providing land swaps, only to be rejected. Should the Palestinians agree on a peace plan which would afford Israel ironclad security guarantees, Israel would be more than happy to trade land for peace, as it has done in the past. However, Israel is mindful that when it pulled out of Gaza in an effort to procure peace in 2005, all it got in return were tens of thousands of rockets shot at Israeli cities and the outlawed Hamas terror group at its doorstep and burrowing deep underground in terror-attack tunnels.

It’s painfully clear that Israel has tried to offer solutions, however, the Palestinian’s failure to disavow terror, their refusal to recognize Israel’s right to exist and their unyielding demands for a Palestinian state to be created from the Mediterranean to the Jordan River, are the true barriers to Mideast peace.