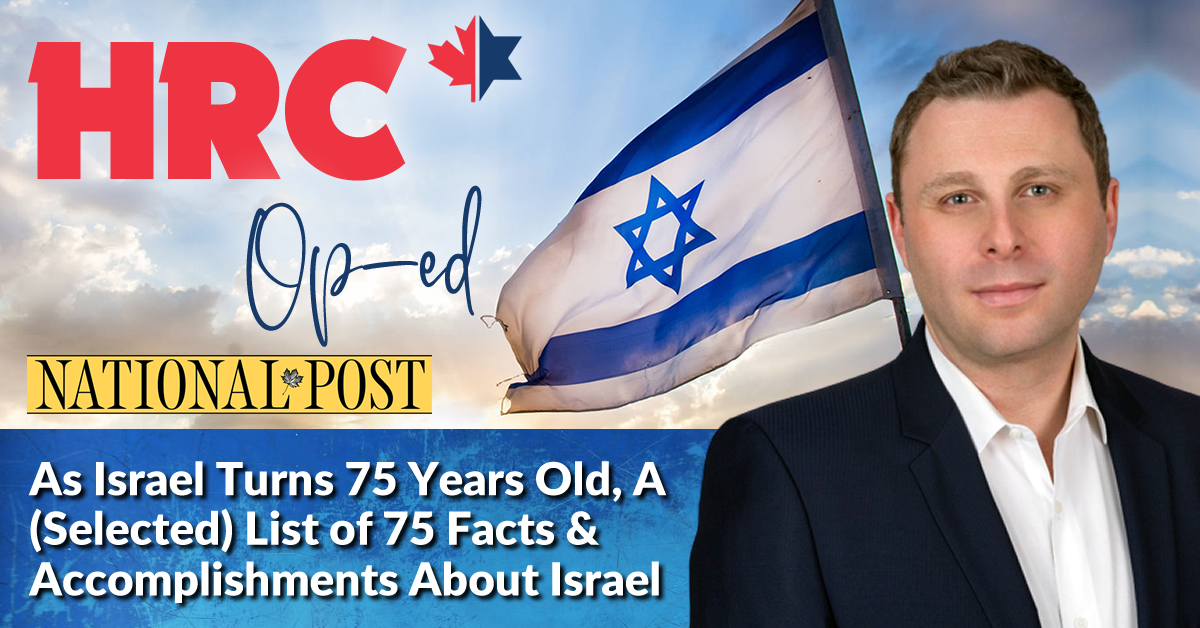 HRC’s Op-Ed entitled: “75 reasons to celebrate Israel,” was published in The National Post on Saturday, January 21, 2023

Israel turns 75 years old this spring, but despite being three-quarters of a century old, the modern Jewish state is more than merely surviving; it’s thriving.

In 1948, when Israel became an independent state, its population was only a few hundred thousand people; today, it’s home

to well over nine million. Israel was conceived not only as a place of refuge for Jews seeking safety from persecution, but as the modern-day manifestation of an ancient dream; the Jewish people’s desire to fulfill their self-determination in their historic homeland.

In 2023, Israel — like all countries — is not without challenges, some of them quite serious. But it’s well-equipped to handle them. Despite being largely devoid of abundant natural resources — or perhaps, as a result of that shortage — Israel has become a world leader in environmental protection and the preservation of finite natural resources. The country has become known globally as the Startup Nation, famous for its innovative culture and growing number of startup companies.

For many years, Israel’s growing success nevertheless did not translate into widespread acceptance in the Middle East, but even that may be changing. The Abraham Accords shone a spotlight on a fast-changing reality in the region, namely that Israel is being increasingly seen as a valuable partner, not just a country to grudgingly accept as a fait accompli. Israel now enjoys diplomatic relations with Sudan, Bahrain, the United Arab Emirates (UAE), Morocco, Kosovo, and others. Even Saudi Arabia, the most influential Sunni Islamic state and the home of Islam’s two holiest cities, Mecca and Medina, may be next.

What 2023 brings for Israel is anyone’s guess. But one thing is certain: the country is likely to hit new heights and achieve new dreams.

To help celebrate the Jewish state’s diamond birthday, here’s a list of 75 of some of Israel’s incredible achievements and relevant facts to give appreciation for all that the country is, and for all that it has accomplished.

1. Israel is a bastion of religious freedom where people of all faiths (and no faith) can practice (or not worship) as they see fit, without persecution.

2. Israel is a world leader in protecting natural resources and the environment, recycling as much as 90 percent of its wastewater.

3. Israel is the only place in the Middle East with a growing Christian population, expanding by roughly two percent annually.

4. Israel is the only place in the Middle East where members of the LGBTQ+ community can live without fear of oppression.

5. Israel is the freest country in the Middle East, according to Freedom House.

7. Israel is a world leader in high-tech and research and development,  spending nearly 5 percent of GDP on innovation.

8. The Israeli military has been called “the most moral army in the Middle East.”

9. Israel is the ancestral homeland of the Jewish people.

10. Israel represents not colonialism, but the return of an indigenous people to their own land.

11. Israel is a vibrant democracy.

12. Israeli Arabs, Muslims and Christians alike have served on the country’s Supreme Court.

13. The past Israeli government had an Arab Islamist party serve in its coalition.

14. Israel has more companies listed on the Nasdaq exchange than any country other than China and the U.S.

15. Israel and Canada have enjoyed warm diplomatic ties since 1949, when the Jewish state was admitted to the United Nations.

17. Israel and Canada signed a free trade agreement in 1997.

18. Nearly two billion dollars are traded between Israel and Canada every year.

19. In early 2023, Israel committed more than $7 million to planting more trees across the country.

20. In 1969, Golda Meir became one of the first female heads of government anywhere in the world.

21. In 2015, Israel opened its first urban nature preserve in Jerusalem, making a safe home for dozens of gazelles.

22. Israel is home to the only Pride Parade in the Middle East.

23. Israel is home to more museums per capita than any other country.

24. The world’s largest ancient dog cemetery is located in Israel.

25. Israel has the world’s largest Jewish population, with nearly half the world’s Jews calling it home.

26. There are more than 1.7 million Muslims in Israel, representing nearly 20 percent of the population.

28. Tel Aviv was founded in 1909 on desolate sand dunes alongside the Mediterranean Sea.

30. Israel has one of the highest life expectancies in the world.

32. Four Israeli institutions are ranked among the world’s top 100 universities.

33. The Mir in Jerusalem is the world’s largest yeshiva (Jewish seminary).

34. In 2021, one-third of Israel’s cabinet ministers were women, marking a new record high.

35. Israel is home to roughly 150,000 members of the Druze ethno-religious group.

37. In recent years, Israel has developed diplomatic ties with a growing list of Arab countries throughout the Middle East (UAE, Bahrain, Morocco and Sudan, along with Jordan and Egypt).

38. Cherry tomatoes were invented in Israel.

40. Very few Israeli children suffer from peanut allergies, in part because they are exposed to peanuts when they are younger.

41. Israel is home to a growing list of world-renowned wines and wineries.

42. You can buy hummus-flavoured ice cream in Israel.

43. More than 90 percent of Israelis eat hummus at least once a week.

44. Israeli women and men alike are conscripted into the military.

45. Since recapturing Jerusalem in 1967 during the Six-Day War, Israel has rebuilt destroyed synagogues.

46. Israel guarantees freedom of expression and freedom of association for all its citizens.

48. Israel guarantees any Jew in the world the right to return to their ancient homeland.

49. During a famine in Ethiopia in the 1980s, Israel airlifted thousands of Ethiopian Jews to Israel.

52. The PillCam was invented in Israel.

55. Israel is smaller than the area of Vancouver Island.

56. Israel has a population roughly equivalent to Quebec.

57. Approximately one million notes are left in the Western Wall holy site every year.

58. Despite Israel’s small population and area, it has won 13 Olympic medals.

60. Israel is home to an underwater restaurant in the city of Eilat.

61. Israel is home to Na Laga’at, a cultural centre helping to break down barriers between Israeli society and members of the deaf, blind and deaf-blind communities.

63 There are more than 4,000 buildings in Tel Aviv from the Bauhaus architectural style, the largest concentration in the world.

64. Advertisers and modelling agencies are banned from using underweight models in Israel.

66. Israel is a rare developed country with an above-replacement fertility rate.

67. Despite losing an astounding one percent of its founding Jewish population of 600,000, Israel successfully won defensive wars against invading Arab armies.

68. The popular Waze navigation application was invented in Israel.

69. Israel ranks 11th in the world for Nobel Prize winners per capita.

70. Israel has repeatedly made painful concessions in an attempt to pursue peace with the Palestinians.

71. Israel is home to sites holy to the Jewish, Christian, Islamic and Baha’i faiths.

73. Princess Alice, the mother of Prince Philip, is buried in Jerusalem.

74. The first Arab country Israel signed a peace agreement with was Egypt in 1979.

75. Tel Aviv is known as the “vegan capital of the world.”