In response to a May 25 Murray Dobbin op-ed in the Hill Times which called on Canadians to boycott, divest, and sanction Israel, HRC encouraged the opposite in a counter op-ed published today which encouraged Canadians to buy, support and develop Israel: 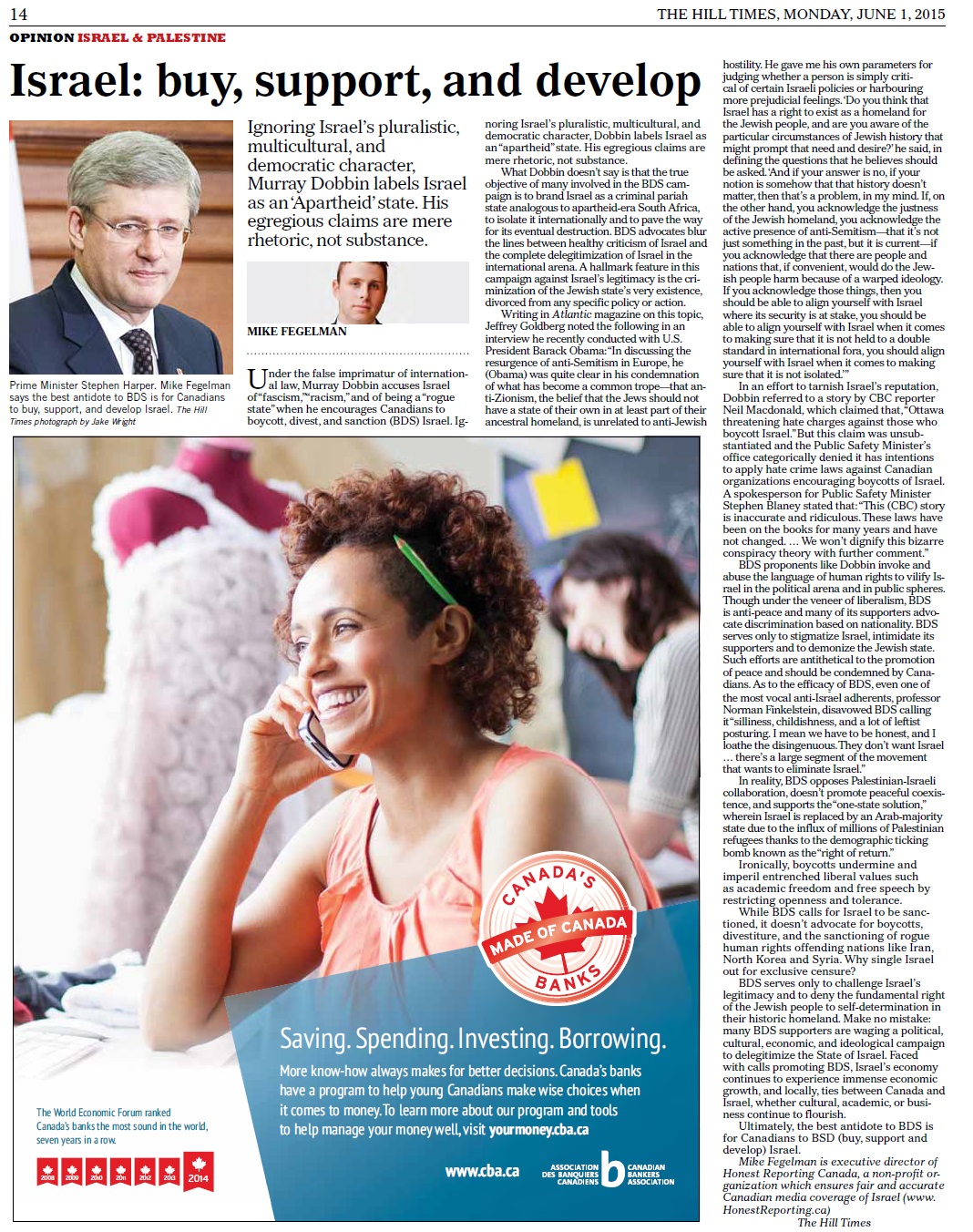 Under the false imprimatur of international law, Murray Dobbin accuses Israel of “fascism”, “racism”, and of being a “rogue state” when he encourages Canadians to boycott, divest, and sanction (BDS) Israel.

What Mr. Dobbin fails to disclose to Hill Times readers is that the true objective of the BDS campaign is to brand Israel as a criminal pariah state analogous to apartheid-era South Africa, to isolate it internationally and to pave the way for its eventual destruction. BDS advocates blur the lines between healthy criticism of Israel and the complete delegitimization of Israel in the international arena.

A hallmark feature in this campaign against Israel’s legitimacy is the criminization of the Jewish State’s very existence, divorced from any specific policy or action.

In an effort to tarnish Israel’s reputation, Dobbin referred to a story recently produced by CBC reporter Neil Macdonald, a journalist well known for his animosity against Israel, which claimed outright that “Ottawa threatening hate charges against those who boycott Israel.” Importantly, this claim is unsubstantiated, this report has been widely debunked, and the Public Safety Minister’s office categorically denied it has intentions to apply hate crime laws against Canadian organizations encouraging boycotts of Israel. A spokesperson for Public Safety Minister Stephen Blaney stated that: “This (CBC) story is inaccurate and ridiculous. These laws have been on the books for many years and have not changed… We won’t dignify this bizarre conspiracy theory with further comment.” Though CBC publically defended Macdonald’s report, our public broadcaster did somewhat walk back the story by changing the article’s headline to “Ottawa cites hate crime laws when asked about its ‘zero tolerance’ for Israel boycotters.”

BDS proponents like Murray Dobbin invoke and abuse the language of human rights to vilify Israel in the political arena and in public spheres. Though under the veneer of liberalism, BDS is anti-peace and its supporters advocate discrimination based on nationality. BDS serves only to stigmatize Israel, intimidate its supporters and to demonize the Jewish state. Such efforts are antithetical to the promotion of peace and should be condemned by Canadians. As to the efficacy of BDS, even one of the most vocal anti-Israel adherents, Professor Norman Finkelstein disavowed BDS calling it “silliness, childishness, and a lot of leftist posturing. I mean we have to be honest, and I loathe the disingenuous. They don’t want Israel… there’s a large segment of the movement that wants to eliminate Israel.”

In reality, BDS opposes Palestinian-Israeli collaboration, doesn’t promote peaceful coexistence, and supports the “one-state solution,” wherein Israel is replaced by an Arab-majority state due to the influx of millions of Palestinian refugees thanks to the demographic ticking bomb known as the “right of return”.

Ironically, boycotts undermine and imperil entrenched liberal values such as academic freedom and free speech by restricting openness and tolerance.

While Mr. Dobbin calls for Israel to be sanctioned, he doesn’t advocate for boycotts, divestiture, and the sanctioning of rogue human rights offending nations like Iran, North Korea and Syria. Why single Israel out for exclusive censure?

BDS serves only to challenge Israel’s legitimacy and to deny the fundamental right of the Jewish people to self-determination in their historic homeland. Make no mistake, BDS supporters are waging a political, cultural, economic, and ideological campaign to delegitimize the State of Israel. Ultimately, the best antidote to BDS is for Canadians to BSD (buy, support and develop) Israel.