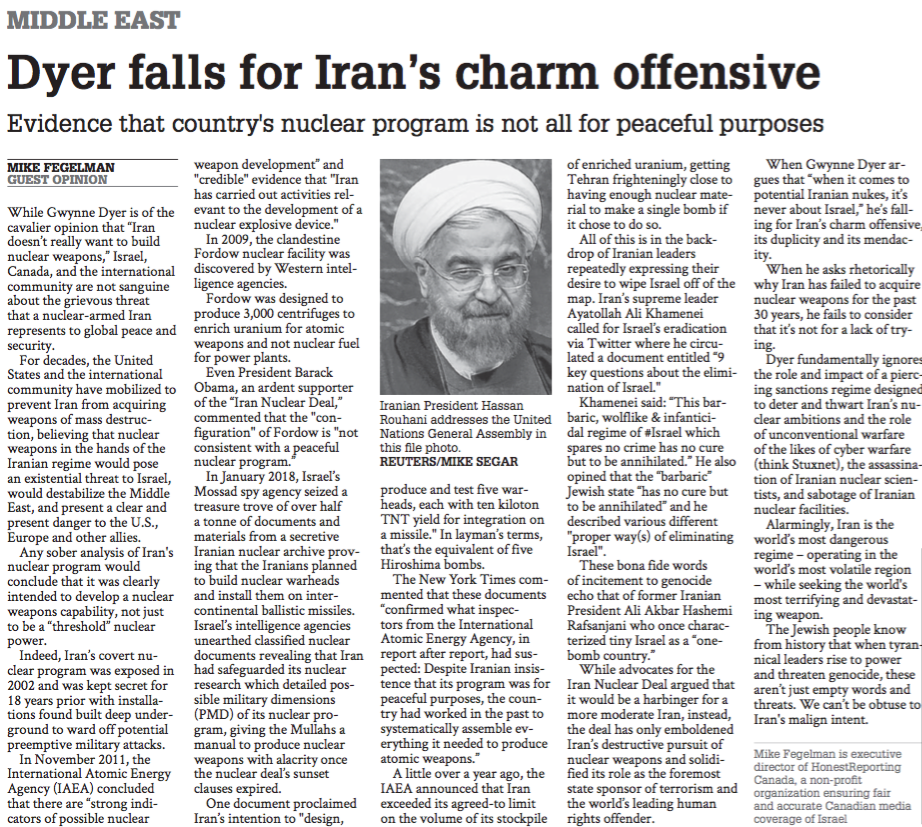 HonestReporting Canada recently took action against Canadian commentator Gwynne Dyer for authoring a polemic arguing that Iran has no interest in acquiring atomic weapons, despite overwhelming evidence to the contrary.

Our rebuttal by HRC Executive Director Mike Fegelman, dispels the notion that Iran’s nuclear efforts are innocuous and are for peaceful purposes only. As we explain in our commentary which was published today in The Guardian, Iran’s destructive pursuit of nuclear weapons is meant to pose an existential threat to Israel and to the international community. It can be read in full immediately below:

While Gwynne Dyer is of the cavalier opinion that “Iran doesn’t really want to build nuclear weapons,” Israel, Canada, and the international community are not sanguine about the grievous threat that a nuclear-armed Iran represents to global peace and security.

For decades, the United States and the international community have mobilized to prevent Iran from acquiring weapons of mass destruction, believing that nuclear weapons in the hands of the Iranian regime would pose an existential threat to Israel, would destabilize the Middle East, and present a clear and present danger to the US, Europe and other allies.

Any sober analysis of Iran’s nuclear program would conclude that it was clearly intended to develop a nuclear weapons capability, not just to be a “threshold” nuclear power.

Indeed, Iran’s covert nuclear program was exposed in 2002 and was kept secret for 18 years prior with installations found built deep underground to ward off potential preemptive military attacks.

In November 2011, the International Atomic Energy Agency (IAEA) concluded that there are “strong indicators of possible nuclear weapon development” and “credible” evidence that “Iran has carried out activities relevant to the development of a nuclear explosive device.” 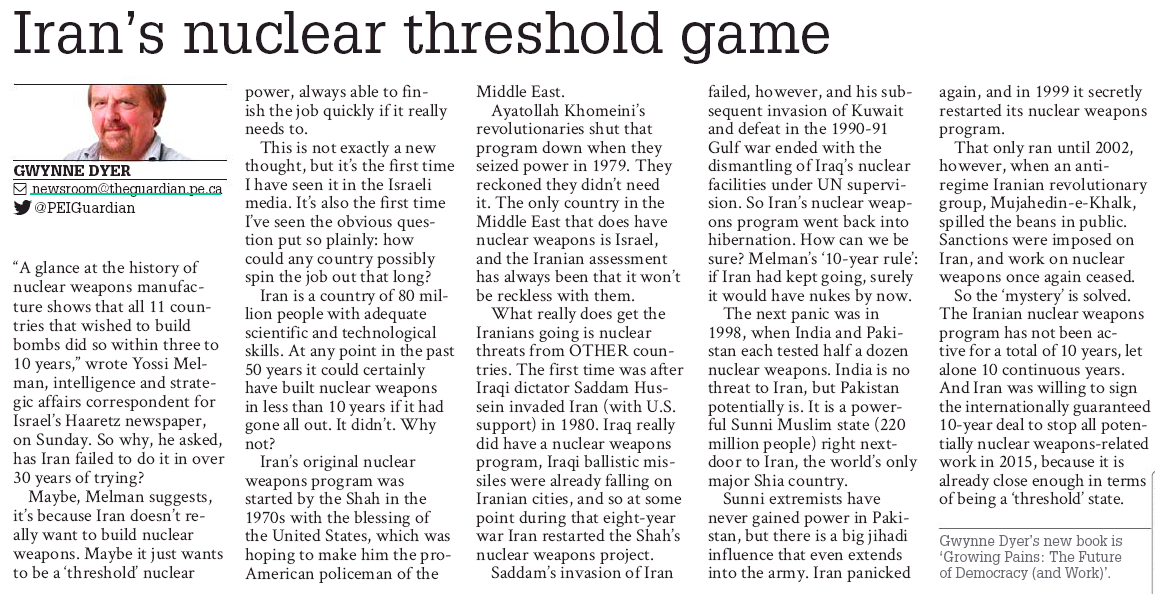 In 2009, the clandestine Fordow nuclear facility was discovered by Western intelligence agencies. Fordow was designed to produce 3,000 centrifuges to enrich uranium for atomic weapons and not nuclear fuel for power plants. Even President Barack Obama, an ardent supporter of the “Iran Nuclear Deal,” commented that the “configuration” of Fordow is “not consistent with a peaceful nuclear program.”

In January 2018, Israel’s Mossad spy agency seized a treasure trove of over half a tonne of documents and materials from a secretive Iranian nuclear archive proving that the Iranians planned to build nuclear warheads and install them on intercontinental ballistic missiles. Israel’s intelligence agencies unearthed classified nuclear documents revealing that Iran had safeguarded its nuclear research which detailed possible military dimensions (PMD) of its nuclear program, giving the Mullah’s a manual to produce nuclear weapons with alacrity once the nuclear deal’s sunset clauses expired.

One document proclaimed Iran’s intention to “design, produce and test five warheads, each with ten kiloton TNT yield for integration on a missile.” In layman’s terms, that’s the equivalent of five Hiroshima bombs.

The New York Times commented that these documents “confirmed what inspectors from the International Atomic Energy Agency, in report after report, had suspected: Despite Iranian insistence that its program was for peaceful purposes, the country had worked in the past to systematically assemble everything it needed to produce atomic weapons.” 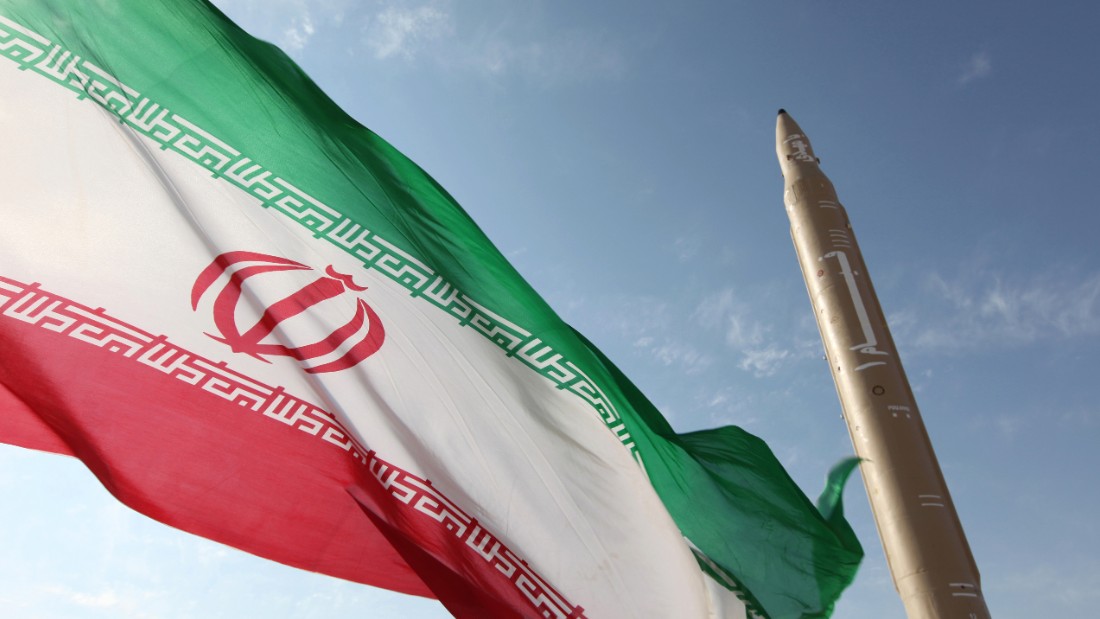 A little over a year ago, the IAEA announced that Iran exceeded its agreed-to limit on the volume of its stockpile of enriched uranium, getting Tehran frighteningly close to having enough nuclear material to make a single bomb if it chose to do so.

All of this is in the backdrop of Iranian leaders repeatedly expressing their desire to wipe Israel off of the map. Iran’s supreme leader Ayatollah Ali Khamenei called for Israel’s eradication via Twitter where he circulated a document entitled “9 key questions about the elimination of Israel.”

These bona fide words of incitement to genocide echo that of former Iranian President Ali Akbar Hashemi Rafsanjani who once characterized tiny Israel as a “one-bomb country.”

While advocates for the Iran Nuclear Deal argued that it would be a harbinger for a more moderate Iran, instead, the deal has only emboldened Iran’s destructive pursuit of nuclear weapons and solidified its role as the foremost state sponsor of terrorism and the world’s leading human rights offender.

When Gwynne Dyer argues that “when it comes to potential Iranian nukes, it’s never about Israel,” he’s falling for Iran’s charm offensive, its duplicity and its mendacity. When he asks rhetorically why Iran has failed to acquire nuclear weapons for the past 30 years, he fails to consider that it’s not for a lack of trying. Dyer fundamentally ignores the role and impact of a piercing sanctions regime designed to deter and thwart Iran’s nuclear ambitions and the role of unconventional warfare of the likes of cyber warfare (think Stuxnet), the assassination of Iranian nuclear scientists, and sabotage of Iranian nuclear facilities.

The Jewish people know from history that when tyrannical leaders rise to power and threaten genocide, these aren’t just empty words and threats. We can’t be obtuse to Iran’s malign intent.