HRC Insider Briefing With Amb. Friedman Covered By The Suburban 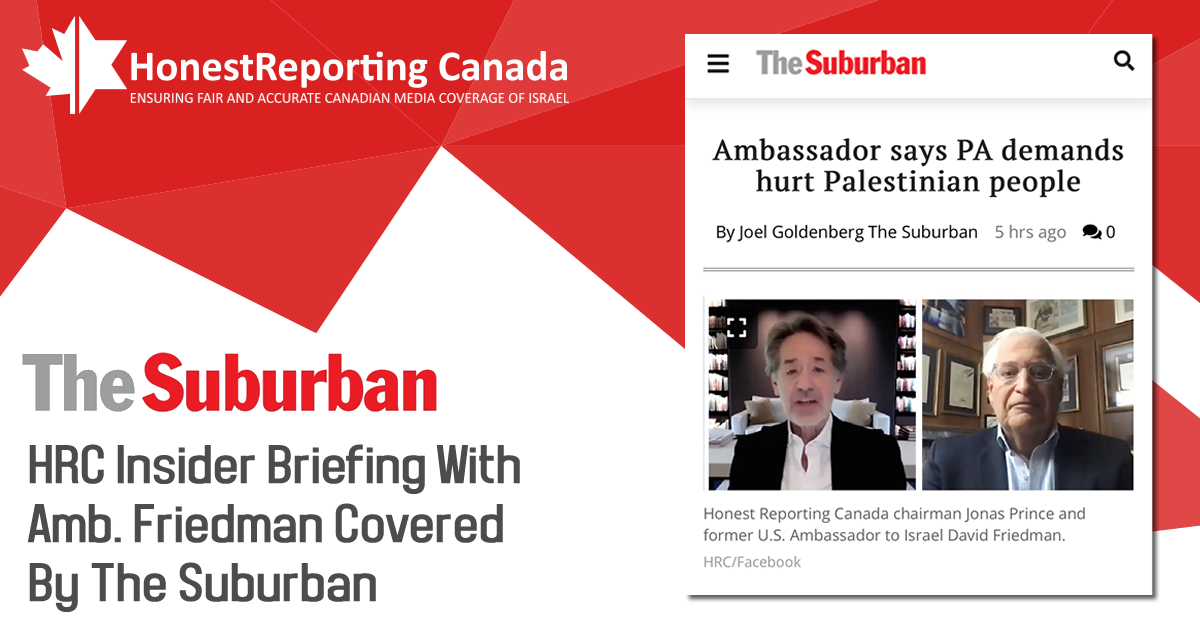 On Wednesday, October 26, The Suburban published the following article, highlighting our recent Insider Briefing with former US Ambassador to Israel, David Friedman, in which HRC Chairman, Jonas Prince, spoke with the Ambassador on how against all odds, peace was brokered in the Middle East thanks to the Abraham Accords.

Friedman, a key player in the Abraham Accords that saw Israel make peace and solidify relations with several Arab countries, appeared on a Zoom broadcast organized by the media watchdog group Honest Reporting Canada. He was interviewed by HRC co-founder and chairman Jonas Prince.

Friedman said the current Palestinian leadership, “from my view, will never give up Jerusalem, and when I say Jerusalem, not just the far outskirts beyond the border fence, which even Israel is willing to talk about, but half of the city. That has a zero percent chance of being agreeable to the Israeli public. They want an influx of Palestinian refugees back into Israel. That has about a zero chance of being accepted by the Israeli government, right wing or left wing. The issues are not bridgeable right now.”

The former ambassador added that what is achievable between Israel and the Palestinians is “providing the Palestinian people under a civilian leadership with a maximum amount of civilian autonomy and prosperity that does not threaten the State of Israel, under an umbrella in which the State of Israel has overall security control. I’ve spoken about this with many Israel leaders, from Yair Lapid to Benjamin Netanyahu and Benny Gantz. They all agree. This is the only plan that the government of Israel can endorse. It’s a good plan for the Palestinians. It won’t give them the state that they want, but it will massively improve the quality of their lives and their prosperity.”

“A repressive regime that will continue to subjugate its own people. Israel’s not going to agree to it.”

Asked to compare the PA to the terrorist group Hamas that has control of the Gaza Strip and is dedicated to never making peace, and the populace of the Palestinian territories and that of Iran — many of whose people are currently in revolt against the Iranian regime’s repressive religious laws, Friedman said there are forward-thinking Palestinians, “looking to dealing with issues practically.

“But they are generally shouted down by the leadership. People tend to think of Hamas as terrorists and the PA as the potential peacemakers. The PA is not a peacemaking organization. It’s brutally corrupt.”

Friedman added that “when people say ‘wouldn’t it be great to have a Palestinian State, let’s say you get rid of Hamas and there’s a state run by the PA, is that good or bad?

The entire interview can be seen on HRC’s Facebook page and on the HonestReporting Canada YouTube page.