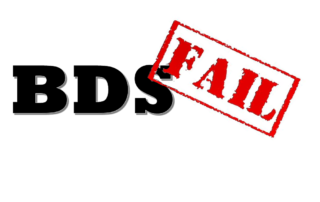 In the Whitehorse Daily Star on August 1, HRC Executive Director Mike Fegelman calls out an anti-Israel detractor for supporting a sanctions regime against Israel. See our commentary below:

Joe Cormier’s support of the boycott, divestment and sanctions movement (BDS) is abhorrent and falls outside the Canadian consensus, where the governing Liberals, opposition Conservatives, and the NDP view it as discriminatory and counterproductive to the prospects of peace.

Consider the following words spoken by Palestinian President Mahmoud Abbas: “No, we do not support the boycott of Israel … We do not ask anyone to boycott Israel itself … we have relations with Israel. We have mutual recognition of Israel.”

The Palestinians’ own leader views BDS as antithetical to the prospects of peace as it unfairly singles Israel out for opprobrium and doesn’t advance Palestinian interests. Cormier’s support for economic sanctions against Israel and political isolation unfairly assigns blame to the Jewish state and is at odds with Canadian values, as it applies differential treatment to Israel.

BDS doesn’t care about peace, tolerance and mutual respect. BDS encourages unilateralism, discourages dialogue and reconciliation, and its efforts have only protracted the conflict. It seeks to make Israel a pariah nation and paint it as a rogue regime whose six million-plus Jews must be blacklisted and slandered.

Israel is the only liberal democracy in the Middle East in which its 20 per cent Arab minority enjoys full equal rights before and under the law. Israeli Arabs consistently affirm they would rather live in Israel as a minority than anywhere else in the Middle East as part of the majority. This “apartheid” libel does not offend only Israelis, but stands as an affront to all those who would campaign against real apartheid were they not misdirected by a campaign of disinformation that excels in rhetoric because it lacks truth and substance.