HRC In Times of Israel: UNRWA and the Perpetuation of the World’s Most Unique ‘Refugee Crisis’ 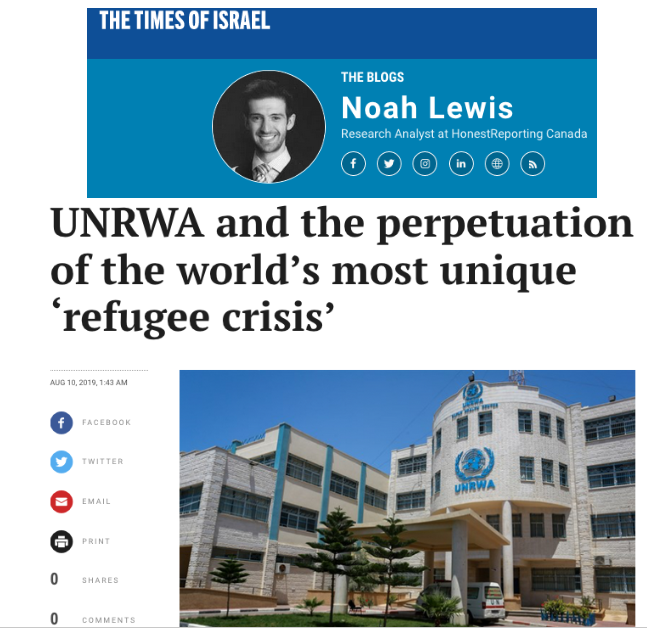 Read this HonestReporting Canada’s commentary on the Times of Israel website by clicking here.

The Palestinian refugee situation is without a doubt the world’s most unique “refugee crisis.” Not because Palestinian-Arabs have faced thousands of years of persecution and exile, or because they face some sort of existential and genocidal threat to their very existence, in fact quite the opposite, they are the world’s most unique refugee situation because the international community and the media continue to treat it as such, further perpetuating it indefinitely.

The Palestinians as they exist today were made up as a plot to present the Israelis as usurpers. Jews and Arabs both existed in mandatory Palestine, and Jews considered themselves as “Palestinians.” For example, the newspaper the Jerusalem Post used to be called the Palestine Post.

Ever since its neighbouring Arab Armies launched their war of annihilation against the nascent Israeli state in 1948, forcing the newly established state to scramble to miraculously defend itself on all fronts, Palestinian-Arabs have adopted a culture of victimhood and terror which they blame solely on the Jewish state.

Nevertheless, the international community and the media seem to forget that the so called “Nakba” was caused by the Arab world’s choice to go to war with the Jews rather than live alongside them in peace. The Arabs were not just forced to flee as a result of the war, the Arab populations living in Haifa and parts of Jerusalem were previously instructed by both the Arab Higher Committee and the invading Arab armies to evacuate by the masses, promising that they could return after the Arab world was victorious. Claims that Israel ethnically cleansed them from the region, or that they were displaced solely by war are inaccurate.

The situation has further been perpetuated by the decisions of the surrounding Arab states to force approximately 800,000 Palestinian-Arab refugees to live in squalor in refugee camps, denying them equal rights and the opportunity of citizenship and to integrate into society with their fellow Arabs with whom they share common language, religion and culture. And so, the special treatment begins.

Most recently, the United Nations Relief and Works Agency for Palestine Refugees in the Near East (UNRWA), the UN organization responsible for supporting the Palestinian “refugees,” has been under fire as a result of an internal ethics report from 2018 being leaked to AFP and Al Jazeera, detailing a corruption scandal that reaches the highest levels of the organization, involving sexual misconduct, nepotism, financial and operational irregularities and retaliation against whistleblowers.

UNRWA was established in December 1949, following Israel’s Independence War. While all other refugees fall under the auspice of the United Nations High Commissioner for Refugees (UNHCR), UNRWA exists independently from the UNHCR and reports directly to the General Assembly.

Whereas the UNHCR has a clear mandate for assisting in the resettlement and assimilation of refugees when their resettlement was not practical, UNRWA has no such mandate. The Arab states (with the exception of Jordan) have refused to accept resettlement of the Palestinian refugees, cynically leaving their Arab brethren to live in squalor in refugee camps, using their suffering as a political and demographic weapon against the State of Israel.

As former Canadian Ambassador to Israel Vivian Bercovici opined in the National Post, UNRWA exists in theory, “to provide support to Palestinian refugees: food, shelter, education, health care. The organization has become a highly politicized vehicle that promotes the dream nurtured among Palestinians to destroy Israel and return to their ancestral homes.”

“As an international human rights organization, UNRWA is required to operate on a non-political and, of course, ethical basis. It doesn’t. Anti-Semitism is spewed in educational curriculum in UNRWA schools, and even the social media accounts of staff. The organization is widely known to be operating with near total immunity, answerable to virtually no one.”

Rather than striving to bring an end to the Palestinian “refugee crisis,” UNRWA has ultimately prolonged their situation by extending “refugee” status to anyone descending from a male Palestinian refugee in perpetuity. This includes extending “refugee” status to the 1.6 million descendants of refugees who have been granted full Jordanian rights and citizenship, contrary to the UN’s 1951 Convention Relating to the Status of Refugees which notes that a refugee loses that status when it acquires the nationality of another country. It should be noted that nowhere in international or refugee law does the status of “refugee” become something inherent in one’s DNA and passed down generation to generation as is the case with Palestinian “refugees.”

Ninety-nine percent of the Palestinian population today referred to as “refugees” fail to meet the unique and minimal definition of a refugee established by UNRWA which states: “persons whose normal place of residence was Palestine between June 1946 and May 1948, who lost both their homes and means of livelihood as a result of the 1948 Arab-Israeli conflict.”

In light of the rabid misappropriation of Palestinian “refugee” status which has, over the last sixty years, resulted in a 700 percent increase, the Palestinian refugee population, based on this trend, is set to exceed that of Canada by mid-century! Meanwhile, the UNHCR has only a quarter of the staff that UNRWA does, to assist the nearly 20 million actual refugees under their jurisdiction as of 2018.

And guess who ultimately foots the bill for funding this counterproductive organization? Not the Arab and Muslim nations in the region, but Western taxpayers. In 2017, the United States, the European Union and its member states together contributed 70% of the overall funding received by the Agency, while the Arab and Muslim nations’ contributions amounted to only 7.1% of UNRWA’s $1.1 billion budget.

However this may start to change as the United States (2017’s largest donor) announced last August that it would be terminating all funding to UNRWA, criticizing it for being an “irredeemably flawed operation” that has consistently failed to reform its “way of doing business.” And even more recently Switzerland, the Netherlands and Belgium (ranked 8, 10 and 16 respectively as donors in 2017) announced this month that they will be suspending their funding to UNRWA following the recent ethics report leak.

It will be interesting to see how UNRWA will compensate for this significant blow to its funding and whether the Arab and Muslim nations of the region will step up their support for their Arab brethren who receive aid from the organization.

If history is any indication of how this may play out, we can expect for these states to ultimately stand idle, demanding a so-called “right of return” for Palestinian “refugees.” The “right of return” as Dr. Michael Harris, author and founder of San Francisco Voice for Israel – now the Bay Area chapter of StandWithUS notes, “is the single biggest fraud” promoted by Arab states and UNRWA alike and is based on UN General Assembly (UNGA) Resolution 194, which was notably at the time of its adoption voted ‘no’ by every single Arab member of the UN.

It first needs to be noted that UNGA Resolutions are not binding on states and do not constitute international law. Secondly, nowhere in Article 11 (the relevant section) of Resolution 194 is the word “right” explicitly written or implied. What Article 11 does state is merely that refugees “should be permitted” to return to their homes at the “earliest practicable date,” and that this only applies to those “wishing to…live at peace with their neighbours.”

While, Palestinians and their supporters proclaim that international law requires Israel to accept the influx of about 5 million “Palestinian refugees,” these same individuals were silent and continue to be silent when it comes to the 800,000 Jews who were forcibly expelled from their homes in Arab and Muslim countries following Israel gaining its independence, who were successfully resettled in Israel and elsewhere.

Notwithstanding this, you do not hear the media touting apartheid accusations or claims of genocide and human rights violations against any of these other states for their past actions against the Jews, and their continued actions against minority groups in their respective countries.

The truth is, as British activist Maajid Nawaz put it: “There is nothing unique about the Israel conflict deserving such disproportionate attention by people who have little connecting them to this land. Baluchistan, Kurdistan, Cyprus, Kashmir, and Taiwan are but a few other disputed territories not fetishized like Palestine is by our left, by Muslims, at the UN and in our media.”