HRC In Times of Israel: “The Never-Ending Case of Palestinian Incitement”

In The Times of Israel on July 21, Honest Reporting Canada Research Analyst Noah Lewis commented on the never-ending case of Palestinian incitement.

Lewis observed that: “Palestinian ???????? society, its education system, media, literature, songs, theater and cinema have been mobilized for extreme anti-Israel ???????? indoctrination which often degenerates from political criticism into blatant antisemitism. It exists in nursery schools and kindergartens, youth movements, schools and universities, mosque sermons, and street demonstrations adorned in Hamas banners as well as the frequent and routine ‘From the river to the sea…’ death to Israel chants.”

Read the full commentary on the Times of Israel website by clicking here, or read it as appended below. 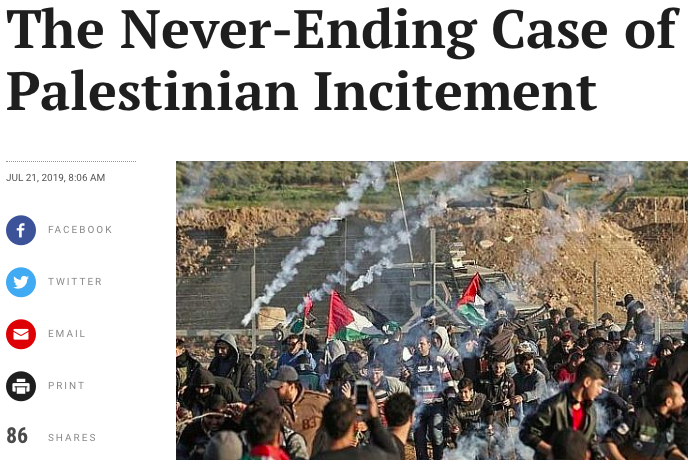 Israel’s position is clear as stated by its Ministry of Foreign Affairs. “Peace can never reign between Israel and the Palestinians as long as generation-after-generation of Palestinians are being fed a never-ending diet of anti-Israel incitement.”

For over a year, thousands of Palestinians have been rioting along the Gaza security fence taking part in the ‘Great Return March’ demonstrations against the Israeli blockade of the Gaza Strip. During these violent weekly protests, Palestinians have been burning tires and throwing stones as well as homemade explosive devices towards IDF troops in an attempt to breach the security barrier and enter Israel to carry out more terror. Interestingly enough, though Egypt also enforced a blockade of Gaza, the riots have only been directed at Israel.

Rioters have launched numerous aerial incendiary devices into southern Israel, using simple items such as kites and balloons carrying burning rags dowsed in oil towards Israeli highways, fields and communities. With the potential to drift for some distance, these devices have sparked hundreds of fires across the south, burning thousands of acres of land and crops, killing livestock and causing millions of shekels in damage. According to the Jewish National Fund (an organization which has been planting trees in Israel since 1901), incendiary balloon arson attacks from Gaza between April and July 5, 2019 set 138 fires over an area of 180 acres in the region of Israel bordering Gaza.

The coverage of these events has been characteristic and typical of the mainstream media, with headlines emphasizing Palestinian civilian casualties—when in actuality most of those “civilians” were armed terrorists. While Israel was pounded by over 700 rockets launched from Gaza by the terrorist groups Hamas and Palestinian Islamic Jihad in May, the media stood idle and then launched the usual assault on the Jewish state when it responded, albeit with tremendous restraint and unprecedented efforts to avoid injuring civilians caught up in the crossfire.

Further, when the Iranian regime and Hassan Nasrallah, the leader of the terrorist group Hezbollah in Lebanon, both recently called for Israel to be wiped off the map, worldwide condemnation was absent and naturally, the media was silent.

While critics of Israel insist on holding the only democratic state in the region to an unreasonable standard of perfection, these same critics excuse any Palestinian misconduct as being the result of “occupation.” This double standard is a textbook example of the concept coined by Michael Gerson, former chief speechwriter for President George W. Bush, “the soft bigotry of low expectations,”—claiming that the Palestinians cannot be expected to behave in accordance with Western standards of morality and consequently excusing their barbaric actions.

Palestinian society, its education system, media, literature, songs, theater and cinema have been mobilized for extreme anti-Israel indoctrination which often degenerates from political criticism into blatant antisemitism. It exists in nursery schools and kindergartens, youth movements, schools and universities, mosque sermons, and street demonstrations adorned in Hamas banners as well as the frequent and routine “From the river to the sea…” death to Israel chants.

The European Union hands the Palestinian Authority $404 million USD per year, with most allotted for its education ministry. In addition, the EU contributed $178 million USD to UNRWA, the UN agency for Palestinian “refugees” and their descendants (Canada gave $25 million in 2018), much of which goes to funding its schools and related programs where Palestinian children are indoctrinated with anti-Jewish and anti-Israel, terrorist propaganda.

In a report released by the NGO IMPACT-se (Institute for Monitoring Peace and Cultural Tolerance in School Education) in April 2019, the organization found new Palestinian textbooks to be more radical than in the past, containing incitement and rejection of peace with Israel. The report found that the new curriculum “deliberately omits any discussion of peace education or reference to any Jewish presence in Palestine before 1948.” “Most troubling, there is a systematic insertion of violence, martyrdom and jihad across all grades and subjects in a more extensive and sophisticated manner, embracing a full spectrum of extreme nationalist ideas and Islamist ideologies that extend even into the teaching of science and mathematics.”

In a statement released on April 24, 2019 in response to the IMPACT-se report, the EU announced its intentions to conduct an examination of the new Palestinian school textbooks. The study will be carried out by an “independent and internationally recognized research institute” with the aim of “identifying possible incitement to hatred and violence and any possible lack of compliance with UNESCO (United Nations Educational, Scientific and Cultural Organisation) standards of peace and tolerance in education.”

This pervasive incitement of hatred and violence against Israel in Palestinian society has many faces, ultimately beginning with the complete denial of the very existence of the State of Israel. Maps in schools and universities in the west bank and Gaza do not even bear the name of Israel, nor a large number of its cities and towns. Palestinian officials and religious leaders frequently deny the thousands of years of Jewish connection to the Land of Israel, promoting a narrative that disavows any Jewish rights to the Jewish historical homeland.

This ubiquitous antipathy is also exemplified by their hero worship and glorification of terrorists. Palestinian inciters extol the deeds of terrorists, naming schools and football teams in their honour and holding them up as models to be emulated. In this environment, Palestinian children are raised to honour terrorists and to seek ‘martyrdom’ through Jihad.

To take a quote from Somali-born Dutch-American activist and scholar Ayaan Hirsi Ali’s brilliant, must read opinion piece in the Wall Street Journal on July 12, “hate is hard to unlearn without coming to terms with how you learned it.” Until the Palestinians learn how to come to terms with the existence of the Jewish state of Israel, how can we ever expect to deviate from the status quo and achieve a solution that will lead to lasting peace in the region?