HRC in Times of Israel: The Lack of Democracy & Fundamental Freedoms in Palestinian Territories 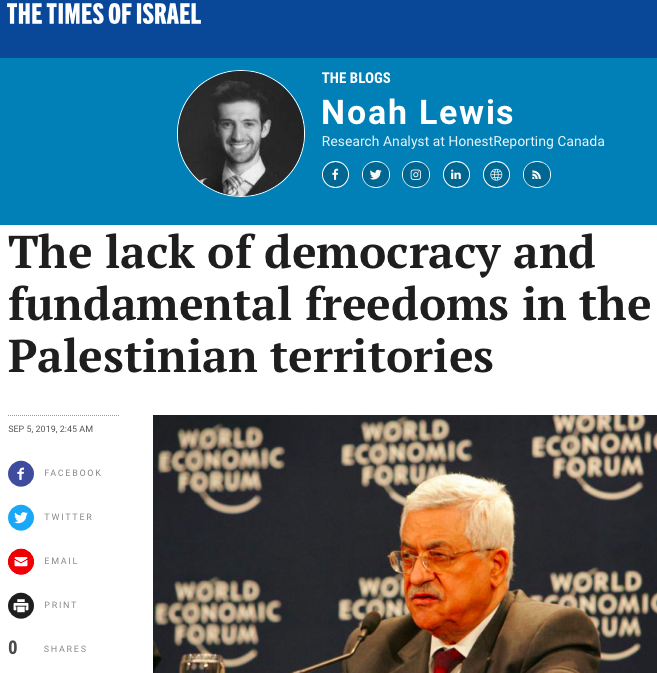 In a news cycle where Israel was all the media could talk about in the wake of Israel’s move to bar United States Democratic House Representatives Rashida Talib and Ilhan Omar entry to Israel, renewing accusations of oppression and apartheid against the Jewish state, another story from the region slid under the radar in all the mainstream media coverage: the Palestinian Authority (PA) just made the unprecedented move of banning all LGBTQ activities in the West Bank.

This move by the PA should not come as a shock to anyone. It is but the most recent example of the Palestinian leadership taking large steps to strip away and deny fundamental freedoms to their people and infringe upon their basic human rights.

In their annual report for 2018, Freedom House, a non-partisan, non-profit organization that monitors and evaluates democracy and freedom around the world, once again ranked the West Bank’s ‘freedom status’ as “not free,” and gave it a freedom rating of 6.0, while the Gaza Strip, controlled by the terrorist group Hamas, also received the freedom status of “not free,” and a freedom rating of 6.5. For comparison, Israel’s freedom status is of course “free,” and it has a freedom rating of 2.0. (Nations are ranked on a scale of 1.0-7.0. 1.0 is an open democratic society with fair and free political life, 6.0 is an autocratic regime with minimal political rights, and 7.0 is an autocrat regime with severe oppression).

The PA has not held a presidential election since 2005 when Fatah’s Mahmoud Abbas came to power following Yasser Arafat’s death. Despite the fact that his electoral mandate expired in 2009, Abbas continues to hold power and govern in the West Bank. Hamas seized control of the Gaza Strip in 2007 following a violent rift with Fatah and the PA, and it has largely rejected Abbas’s and the PA’s authority to govern there.

Laws and societal norms in the West Bank and Gaza derive in part from Sharia law, which puts women at a disadvantage in matters such as marriage and divorce. Accordingly, rape and domestic violence remain underreported and frequently go unpunished as authorities are allegedly reluctant to pursue such cases. The Palestinian leadership makes little effort to address the rights of marginalized groups within Palestinian society. While women enjoy formal political equality under PA laws, and some women did win seats in the PLC in 2006, women are mostly excluded from leadership positions in Hamas and absent from public political events in practice. Palestinian women are also underrepresented in most professions and encounter discrimination in employment.

The Palestinian legal system offers few protections against harassment and discrimination for women and other vulnerable minority groups and the authorities have enforced restrictions on personal attire and behaviour that they deem immoral. According to the Freedom House report, Honour killings reportedly continue to occur as a punishment for immoral behaviour; a provision in the penal code allows Palestinian judges to show leniency in “extenuating circumstances”—a loophole that has traditionally been used in such cases.

The Palestinian leadership has consistently been accused of corrupt practices related to public services and their controls on the distribution of aid, which is crucial to daily life in Gaza and the PA controlled areas of the West Bank. As reported back in August, the United Nations Relief and Works Agency for Palestine Refugees in the Near East (UNRWA), the UN organization responsible for supporting the Palestinian “refugees,” has one again come under fire following the leak of an internal ethics report detailing a corruption scandal reaching the highest levels of the organization, involving sexual misconduct, nepotism, financial and operational irregularities and retaliation against whistleblowers.

The media and journalists are generally not free in the West Bank and Gaza. There have been dozens of documented press freedom violations by Palestinian authorities including arrests, detentions and interrogations, as well as numerous physical attacks on critics, activists, journalists and bloggers.

In 2017, Abbas issued an executive decree creating new laws which prescribe heavy fines and lengthy prison terms for a range of vaguely defined offenses including the publication or dissemination of material that is critical of the PA, content that could disturb public order or national unity, or harm family and religious values. Additionally, the Palestinian leadership has been known to block websites belonging to the political opposition and independent media outlets.

As the report notes, the Palestinian court system has persisted to impose the death penalty despite the almost complete lack of due process, including the right to appeal sentences.  Allegations of torture and other abuse by the PA and Hamas security forces are quite common, and it is rare to find and indication that officers are punished for such violations.

Palestinians deserve a leadership who will care about the well-being of their people. A leadership who does not simply embezzle hundreds of millions of dollars in Western aid, transfer money to offshore bank accounts, and use it to support terror and to fund the Palestinian Authority’s Martyr Fund instead of for pursuing peace. The Palestinians need books, not bombs. They want roads, not rockets.