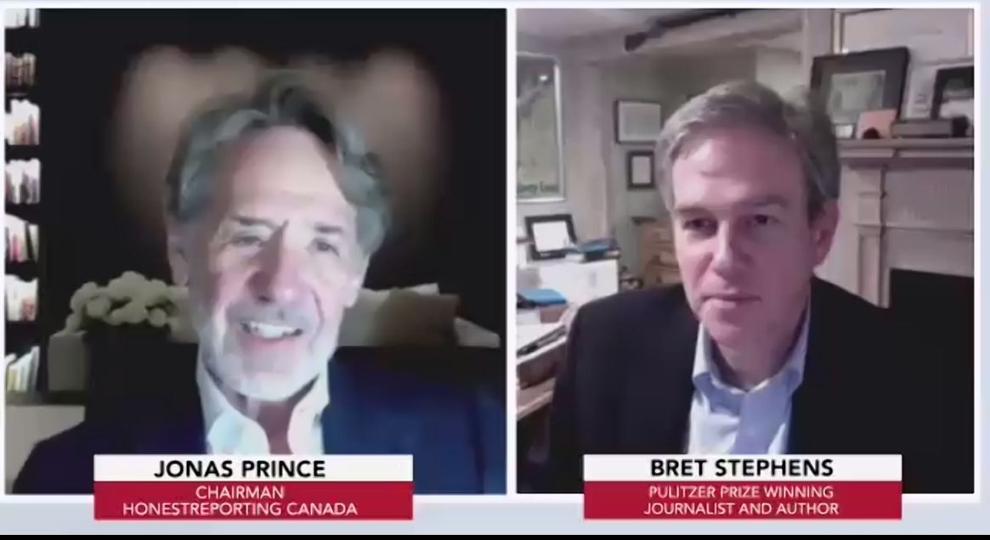 Much of the mainstream global media is continuing its decades-long tradition of getting Israel and its conflict with the Palestinians “dead wrong,” Pulitzer Prize-winning journalist and author Bret Stephens told an Honest Reporting Canada webinar Thursday night.

Stephens was interviewed by Honest Reporting Canada chairman Jonas Prince. Stephens, who is now an opinion columnist with The New York Times, was also editor of The Jerusalem Post, where he wanted to present a more objective and truthful view of Israel to the world, unlike many of his colleagues in the global media.

“They get it wrong on who is the fundamental aggressor,” Stephens said. “The question of media coverage is, if anything, more urgent today because the stakes are higher now than they were [20 years ago].” 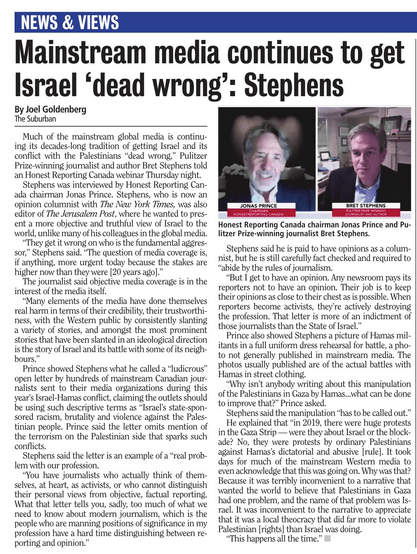 The journalist said objective media coverage is in the interest of the media itself.

“Many elements of the media have done themselves real harm in terms of their credibility, their trustworthiness, with the Western public by consistently slanting a variety of stories, and amongst the most prominent stories that have been slanted in an ideological direction is the story of Israel and its battle with some of its neighbours.”

Prince showed Stephens what he called a “ludicrous” open letter by hundreds of mainstream Canadian journalists sent to their media organizations during this year’s Israel-Hamas conflict, claiming the outlets should be using such descriptive terms as “Israel’s state-sponsored racism, brutality and violence against the Palestinian people. Prince said the letter omits mention of the terrorism on the Palestinian side that sparks such conflicts.

Stephens said the letter is an example of a “real problem with our profession.

“You have journalists who actually think of themselves, at heart, as activists, or who cannot distinguish their personal views from objective, factual reporting. What that letter tells you, sadly, too much of what we need to know about modern journalism, which is the people who are manning positions of significance in my profession have a hard time distinguishing between reporting and opinion.”

Stephens said he is paid to have opinions as a columnist, but he is still carefully fact checked and required to “abide by the rules of journalism.

“But I get to have an opinion. Any newsroom pays its reporters not to have an opinion. Their job is to keep their opinions as close to their chest as is possible. When reporters become activists, they’re actively destroying the profession. That letter is more of an indictment of those journalists than the State of Israel.”

Prince also showed Stephens a picture of Hamas militants in a full uniform dress rehearsal for battle, a photo not generally published in mainstream media. The photos usually published are of the actual battles with Hamas in street clothing.

“Why isn’t anybody writing about this manipulation of the Palestinians in Gaza by Hamas…what can be done to improve that?” Prince asked.

Stephens said the manipulation “has to be called out.”

He explained that “in 2019, there were huge protests in the Gaza Strip — were they about Israel or the blockade? No, they were protests by ordinary Palestinians against Hamas’s dictatorial and abusive [rule]. It took days for much of the mainstream Western media to even acknowledge that this was going on. Why was that? Because it was terribly inconvenient to a narrative that wanted the world to believe that Palestinians in Gaza had one problem, and the name of that problem was Israel. It was inconvenient to the narrative to appreciate that it was a local theocracy that did far more to violate Palestinian [rights] than Israel was doing.

“This happens all the time.”