HRC In The Suburban: “How Should Canada React To The Propagation Of Hate Speech?” 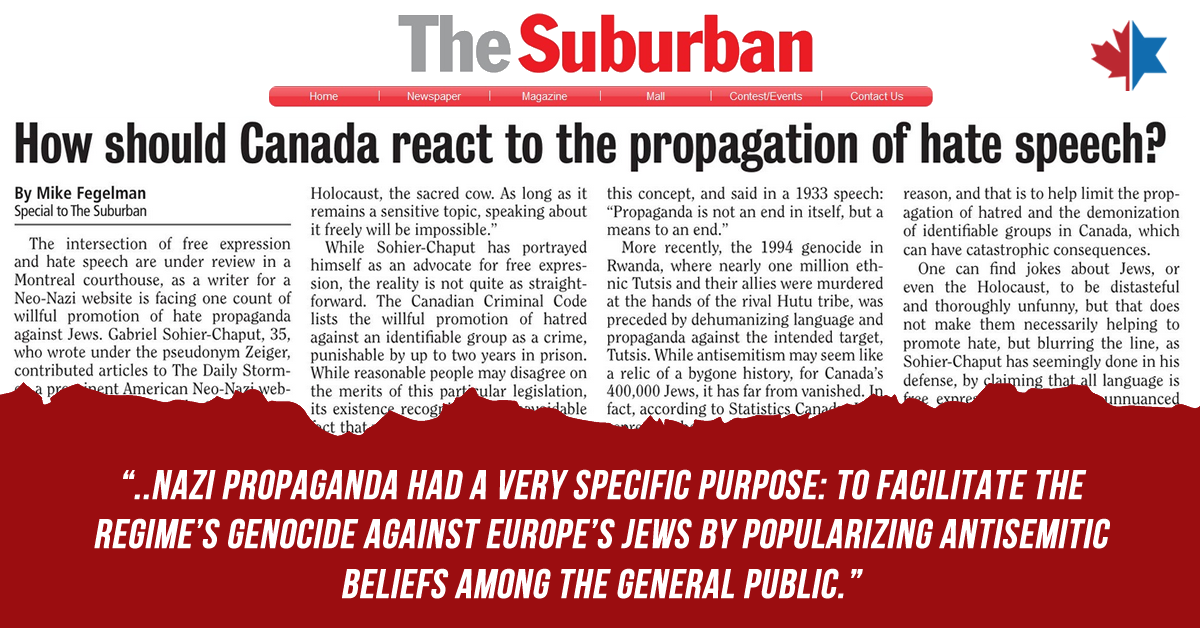 The ongoing court case in Montreal against Gabriel Sohier-Chaput, who contributed antisemitic articles to The Daily Stormer, a large neo-Nazi website, raises the question about how Canada should react to the propagation of hate speech and highlights the dangers of online antisemitic hate.

Sohier-Chaput portrays himself as a defender of free expression, but history has shown the dangers of unchecked hatred, and it’s the responsibility of the justice system to show that peddlers of hatred will be prosecuted.

Read our latest commentary below that was published in The Suburban on March 16.

The intersection of free expression and hate speech are under review in a Montreal courthouse, as a writer for a Neo-Nazi website is facing one count of willful promotion of hate propaganda against Jews.

Gabriel Sohier-Chaput, 35, who wrote under the pseudonym Zeiger, contributed articles to The Daily Stormer, a prominent American Neo-Nazi website, where he posted such statements as “Non-stop Nazism, everywhere, until the very streets are flooded with the tears of our enemies.”

Though Sohier-Chaput acknowledged that he wrote for The Daily Stormer, he defended his words by claiming they were meant ironically, and to “make sure no SJW [social justice warrior] or Jew can remain safely untriggered,” as he wrote in one of his articles.

In the ongoing court proceedings, Sohier-Chaput has argued that all he meant to do was “create a boogeyman for the left,” adding “If we want to take down political correctness, we have to poke at Jews and the Holocaust, the sacred cow. As long as it remains a sensitive topic, speaking about it freely will be impossible.”

While Sohier-Chaput has portrayed himself as an advocate for free expression, the reality is not quite as straightforward.

The Canadian Criminal Code lists the willful promotion of hatred against an identifiable group as a crime, punishable by up to two years in prison. While reasonable people may disagree on the merits of this particular legislation, its existence recognizes the unavoidable fact that while hate speech may begin as a matter of free expression, history has taught it can have very dangerous real-world implications.

For example, in the years preceding the Holocaust, the Nazi regime widely disseminated antisemitic propaganda to its general population, claiming widespread Jewish conspiracies and other common tropes. This Nazi propaganda had a very specific purpose: to facilitate the regime’s genocide against Europe’s Jews by popularizing antisemitic beliefs among the general public.

Joseph Goebbels, Hitler’s Minister of Propaganda, understood this concept, and said in a 1933 speech: “Propaganda is not an end in itself, but a means to an end.”

More recently, the 1994 genocide in Rwanda, where nearly one million ethnic Tutsis and their allies were murdered at the hands of the rival Hutu tribe, was preceded by dehumanizing language and propaganda­­­ against the intended target, Tutsis.

While antisemitism may seem like a relic of a bygone history, for Canada’s 400,000 Jews, it has far from vanished. In fact, according to Statistics Canada, Jews represent the single largest target of religiously motivated hate crimes.

So how should Canada react to the propagation of hate speech, whether online or in traditional media?

First, it’s critical to understand the Charter of Rights and Freedoms does recognize freedom of expression as a cherished right to Canadians. Limiting this right should not be taken lightly, or without serious consideration. Unpopular views, no matter how unsavoury or noxious, are not in and of themselves, hate speech just by virtue of their unpleasantness. However, hate speech legislation exists for a reason, and that is to help limit the propagation of hatred and the demonization of identifiable groups in Canada, which can have catastrophic consequences.

One can find jokes about Jews, or even the Holocaust, to be distasteful and thoroughly unfunny, but that does not make them necessarily helping to promote hate, but blurring the line, as Sohier-Chaput has seemingly done in his defense, by claiming that all language is free expression, is similarly unnuanced and overly simplistic.

Sohier-Chaput may be portraying himself as a warrior for free expression, but by peddling antisemitic propaganda on one of the world’s most prominent neo-Nazi websites, he has shown otherwise.

The Canadian justice system, and the news media in general, must take seriously its responsibility to keep a check on hate speech.