The Violent Consequences of Anti-Israel Hatred: A Fireside...
Queen Elizabeth & The Jews: A Close Relationship...
Against All Odds: Forging Peace In The Middle...
2022 Third Quarter Impact Report
How Anti-Israel Propaganda Has Proliferated On University Campuses:...
Hill Times Publishes HRC Subscriber’s Letters Who Took...
CBC Ombud Acknowledges Shortcomings Of “Our Montreal” Report...
Hamas Shows Its Real Face By Executing Five...
Success! Radio-Canada Retracts Claim That Israel Killed 49...
Jerusalem: Living Proof of The Jewish People’s 3,000...
Home Daily Brief HRC In The Post Millennial: The US Must Stay Trump’s Course in the Mideast

HRC In The Post Millennial: The US Must Stay Trump’s Course in the Mideast

With only two months left until a new Biden government takes charge, and though the coming administration may be tempted to veer away from Trump’s policies in the Middle East, a sanguine news analysis should come to the conclusion that the best course of action would be to stay on a similar, if not, the same path, as the last four years.” 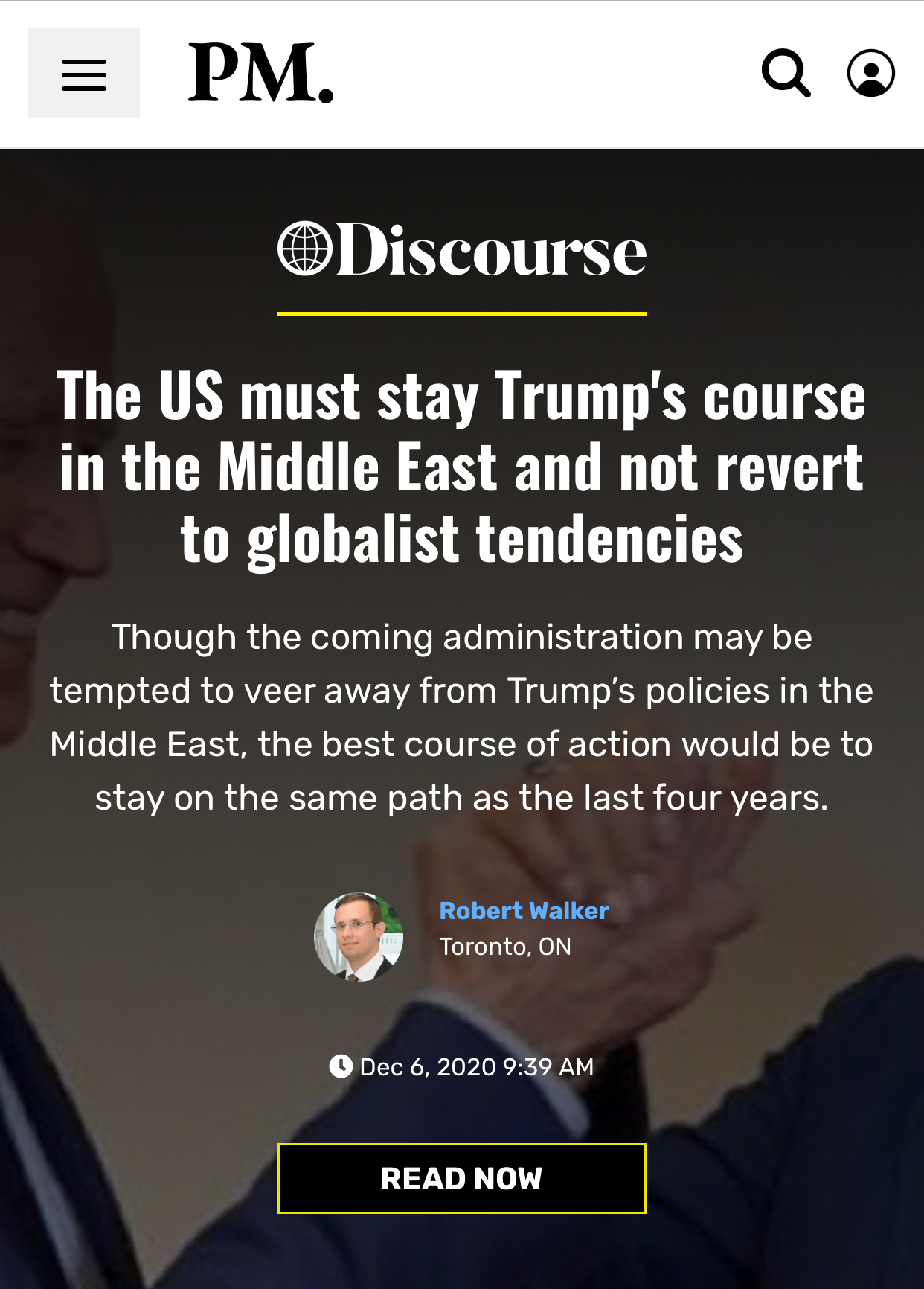 In the coming months, reporters will dutifully assess, and news pundits will prognosticate, what the prospects for peace in the Middle East look like under a Biden-Harris administration.

While the Trump administration was seen largely negatively in polls of across multiple, developed countries, Israel was a noticeable outlier, with more than 70 percent of Israelis seeing Trump favourably, according to a January 2020 survey from Pew Research.

A number of decisions made by the Trump administration were well-received in Israel, including the US embassy’s move from Tel Aviv to Jerusalem, the recognition of Israeli sovereignty over the Golan, the withdrawal of the United States from the nuclear deal with Iran, and halting US funding to the United Nations Relief Works Agency (UNRWA). Israelis closely follow American politics, in part because the impact of the United States on Israel is impossible to ignore.

With only two months left until a new Biden government takes charge, and though the coming administration may be tempted to veer away from Trump’s policies in the Middle East, a sanguine news analysis should come to the conclusion that the best course of action would be to stay on a similar, if not, the same path, as the last four years.

The move of the US embassy from Tel Aviv to Jerusalem, announced in 2017, was met with widespread concern in diplomatic circles and by the mainstream media who foreshadowed that violence would erupt as a result. That mayhem never materialized, because although no major diplomatic power–Canada included–formally recognized Jerusalem as Israel’s capital at the time, it was clear to all parties that Jerusalem was in fact the capital of the Jewish State, regardless of international recognition.

Though not often reported in the news, Jerusalem is home to Israel’s parliament, Supreme Court, and government offices, to say nothing of the Jewish people’s three thousand years of history in the city. Regardless of the bluster on the part of the Palestinian Authority, there was no doubt that Israel saw Jerusalem as its capital. As such, moving the US embassy to Jerusalem–the western portion mind you–was in fact helpful to the cause of peace. This policy showed the Palestinian Authority the parameters of what a peace deal could include, and what was off the table.

Of particular significance is the Iranian nuclear deal, called the Joint Comprehensive Plan of Action (JCPOA), which was signed by Iran and the five permanent members of the United Nations Security Council, as well as the European Union. The JCPOA incentivized Iran to pause (but not eliminate) its nuclear program through a lifting of sanctions and other financial assistance, but evidence suggests that Iran never truly halted its nuclear ambitions, but rather hid their activities from public view.

When US President Donald Trump withdrew the United States from the JCPOA in 2018, and reinstated American sanctions on Iran, Iran was deprived of much-needed capital to invest in its nuclear program, as well as its long-established financial support for terrorist groups like Hezbollah. But if the United States re-enters the nuclear deal as Biden promises to do, it could act as a much-needed cash infusion for the struggling Iranian regime intent on spinning centrifuges, being a regional hegemon, and continuing to be the leading state sponsor of terror.

In 2018, the United States paused its funding for the United Nations Relief Works Agency (UNRWA), which at its peak had represented almost $450-million CAD. UNRWA, which receives tens of millions of dollars of Canadian funding, is an obstructionist, anti-Israel front, posing as a relief organization. By purposefully classifying millions of descendants of the original 1948 Palestinian-Arab exiles as contemporary refugees, UNRWA has deliberately placed an obstacle in the peace process, because it knows that if millions of Palestinians move into Israel, the country would cease to be a Jewish State.

If a new Biden administration renews funding to UNRWA, our media should observe that this will significantly increase the spigot of funds going to fund terrorism and obstructionism. But if the United States does decide to continue funding, at the very least it should demand more transparency and accountability, and require guarantees that not only do its funds not go to nefarious causes, but that UNRWA stop defining third and fourth generation exiles as refugees.

The last two months have seen a flurry of peace deals in the region, between Israel and three of its neighbours in the Gulf (United Arab Emirates, Bahrain, and Sudan), and there are rumours that even Saudi Arabia could be next. The Biden administration should work off this positive momentum to forge more peace deals with Israel and the Arab world.

The United States is more than an ally of Israel; it serves as its primary diplomatic and military benefactor. And while many media outlets suggested instability would arise from many of the Trump Middle East policies over the last four years, fortunately, the most-dire predictions did not come to fruition. Rather, the last four years of US policy in the Middle East has brought some welcome changes to the region, and the incoming Biden administration should be strongly encouraged to stay the course and avoid the tempting, but fateful mistakes which have put the breaks on Middle East peace for far too many years.