HRC In the National Post: “Antisemitism Evident” in Anti-Zionists

In the National Post today, HRC Executive Director Mike Fegelman commented on how Canada’s recongizing the IHRA definition of antisemitism, recognizes that when anti-Israel detractors support anti-Zionism, that those efforts are actually antisemitic.

Here’s our letter in full: 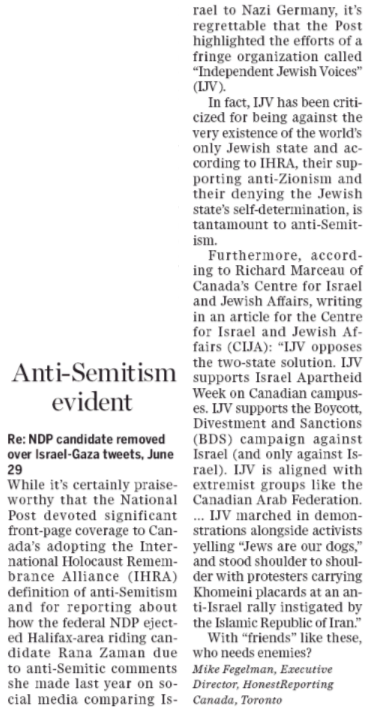 While it’s certainly praiseworthy that the National Post devoted significant frontpage coverage to Canada’s adopting the International Holocaust Remembrance Alliance (IHRA) definition of antisemitism and for reporting about how the federal NDP ejected Halifax-area riding candidate Rana Zaman due to antisemitic comments she made last year on social media comparing Israel to Nazi Germany, it’s regrettable that the Post highlighted the efforts of a fringe organization called “Independent Jewish Voices” (IJV) that is not representative of the Jewish community.

In fact, IJV has been criticized for being against the very existence of the world’s only Jewish state and according to IHRA, their supporting anti-Zionism and their denying the Jewish state’s self determination, is tantamount to antisemitism. Furthermore, according to Richard Marceau of CIJA: “IJV opposes the two-state solution. IJV supports Israel Apartheid Week on Canadian campuses. IJV supports the Boycott, Divestment and Sanctions (BDS) campaign against Israel (and only against Israel). IJV is aligned with extremist groups like the Canadian Arab Federation and Tadamon. IJV marched in demonstrations alongside activists yelling “Jews are our dogs,” and stood shoulder to shoulder with protesters carrying Khomeini placards at an anti-Israel rally instigated by the Islamic Republic of Iran.”