Israel Is An Imperfect Country, But A Vibrant...
Why Are Anti-Israel Activists So Afraid of The...
McGill Tribune Publishes Op-Ed Calling for a Boycott...
Ontario Arabic Paper’s Editor Downplays Holocaust; Meshwar Describes...
How the War in Ukraine is Having a...
Toronto Star Columnist Shree Paradkar Wrongly Claims IHRA...
After Vancouver Adopts IHRA, CBC Radio Interviews Fringe...
Qatar Prepares For The 2022 World Cup: Will...
Lawfare: Who is Using the Law More Effectively?...
Official Publication of the College of Physicians and...
Home Media Action Alerts2018 HRC in the Guardian: “Palestinians Must Teach Kids Peace”

HRC in the Guardian: “Palestinians Must Teach Kids Peace” 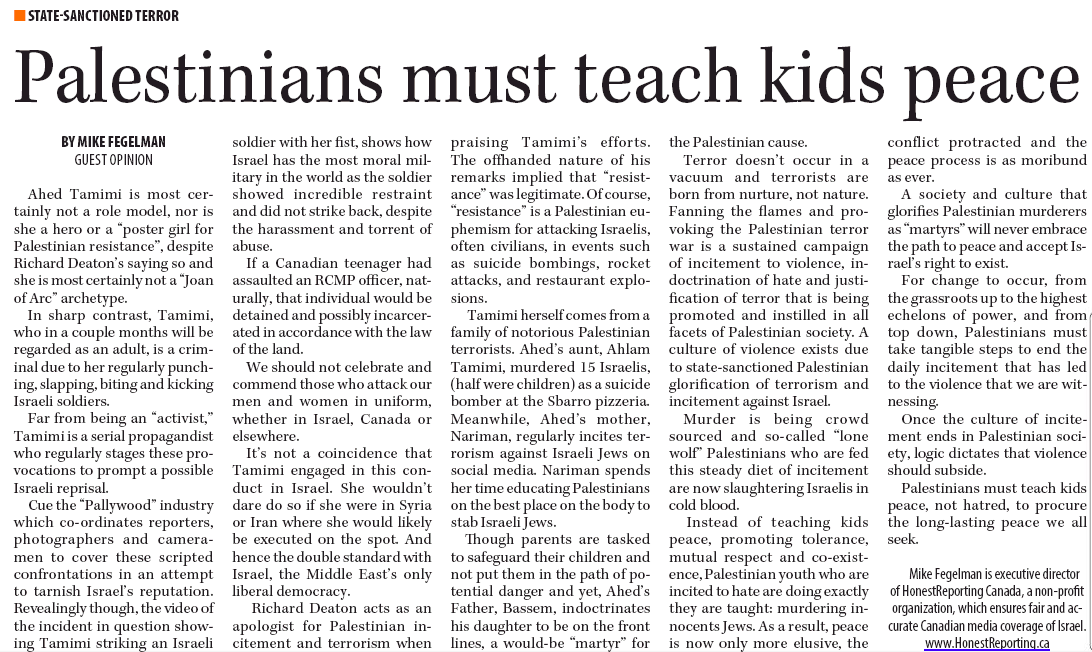 In a commentary published today in the Guardian, HRC Executive Director Mike Fegelman points out that “Once the culture of incitement ends in Palestinian society, logic dictates that violence should subside. Palestinians must teach kids peace, not hatred, to procure the long-lasting peace we all seek.”

Read our full commentary appended below or online by clicking here.

In sharp contrast, Tamimi, who in a couple months will be regarded as an adult, is a criminal due to her regularly punching, slapping, biting and kicking Israeli soldiers.

Far from being an “activist”, Tamimi is a serial propagandist who regularly stages these provocations to prompt a possible Israeli reprisal. Cue the “Pallywood” industry which coordinates reporters, photographers and cameramen to cover these scripted confrontations in an attempt to tarnish Israel’s reputation. Revealingly though, the video of the incident in question showing Tamimi striking an Israeli soldier with her fist, shows how Israel has the most moral military in the world as the soldier showed incredible restraint and did not strike back, despite the harassment and torrent of abuse.

If a Canadian teenager had assaulted an RCMP officer, naturally, that individual would be detained and possibly incarcerated in accordance with the law of the land. We should not celebrate and commend those who attack our men and women in uniform, whether in Israel, Canada or elsewhere. They are not just endangering themselves, but everyone else. Make no mistake, these efforts do nothing to pave the road to Mideast peace.

It’s not a coincidence that Tamimi engaged in this conduct in Israel. She wouldn’t dare do so if she were in Syria or Iran where she would likely be executed on the spot. And hence the double standard with Israel, the Middle East’s only liberal democracy.

Importantly, our children, youth and teenagers should be playing tag, hide-and-go-seek, going to school and playing with friends, and should not be engaging in violence and incitement.

Richard Deaton acts as an apologist for Palestinian incitement and terrorism when praising Tamimi’s efforts. The offhanded nature of his remarks implied that “resistance” was legitimate. Of course, “resistance” is a Palestinian euphemism for attacking Israelis, often civilians, in events such as suicide bombings, rocket attacks, and restaurant explosions.

Tamimi herself comes from a family of notorious Palestinian terrorists. Ahed’s aunt, Ahlam Tamimi, murdered 15 Israelis, (half were children) as a suicide bomber at the Sbarro pizzeria. She was just 20-years-old when she carried out this odious terror attack in Israel. Meanwhile, Ahed’s mother, Nariman, regularly incites terrorism against Israeli Jews on social media. Nariman spends her time by educating Palestinians on the best place on the body to stab Israeli Jews. Though parents are tasked to safeguard their children and not put them in the path of potential danger and yet, Ahed’s Father, Bassem, indoctrinates his daughter to be on the front lines, a would-be “martyr” for the Palestinian cause.

Terror doesn’t occur in a vacuum and terrorists are born from nurture, not nature. Fanning the flames and provoking the Palestinian terror war is a sustained campaign of incitement to violence, indoctrination of hate and justification of terror that is being promoted and instilled in all facets of Palestinian society. A culture of violence exists due to state-sanctioned Palestinian glorification of terrorism and incitement against Israel. Whether by the official institutions of the Palestinian Authority which honours terrorists killing Israeli civilians as “heroes,” whose school textbooks feature maps where Israel is purged from the region, and whose media call Jews “barbaric monkeys [and] wretched pigs,” Israel’s neighbours and supposed “partners for peace” are nurturing a climate of hatred against Israeli Jews. Palestinian adolescents — weaned on blood libels — now play videogames where the goal is to kill and mutilate as many Jews as you can. On the internet, Palestinians terror meets Web 2.0 as YouTube videos instruct Palestinians on how to literally go for the jugular, and how to disembowel and decapitate Israelis with kitchen knives, much like ISIS is doing in Syria and Iraq.

Murder is being crowdsourced and so-called “lone wolf” Palestinians who are fed this steady diet of incitement are now slaughtering Israelis in cold blood.

Instead of teaching kids peace, promoting tolerance, mutual respect and co-existence, Palestinian youth who are incited to hate are doing exactly they are taught: murdering innocents Jews. As a result, peace is now only more elusive, the conflict protracted and the peace process is as moribund as ever.

A society and culture that glorifies Palestinian murderers as “martyrs” will never embrace the path to peace and accept Israel’s right to exist. For change to occur, from the grassroots up to the highest echelons of power, and from top down, Palestinians must take tangible steps to end the daily incitement that has led to the violence that we are witnessing.

Once the culture of incitement ends in Palestinian society, logic dictates that violence should subside. Palestinians must teach kids peace, not hatred, to procure the long-lasting peace we all seek. 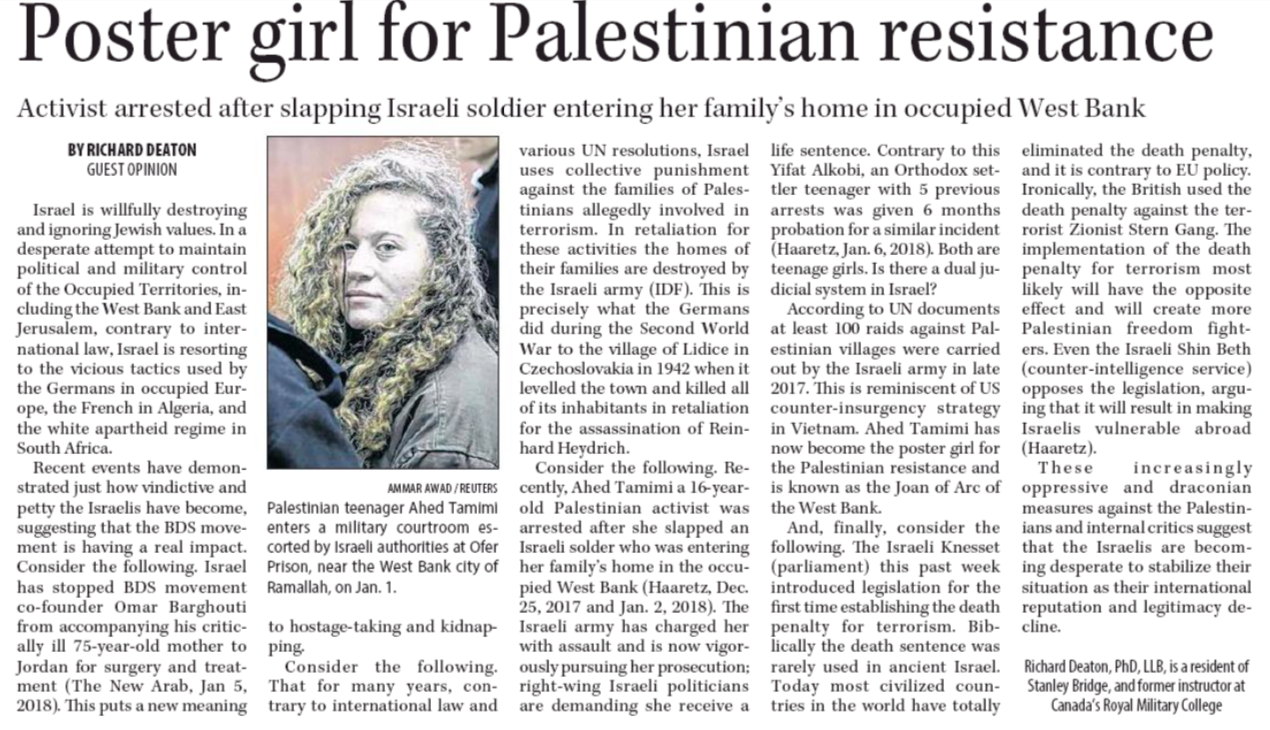