HRC in the Guardian: Hamas Only Seeks Conflict With Israel and Jewish State’s Destruction

In The Guardian today, Honest Reporting Canada commented on how Hamas only seeks a conflict with Israel, the Jewish state’s destruction, and the genocide of world Jewry. 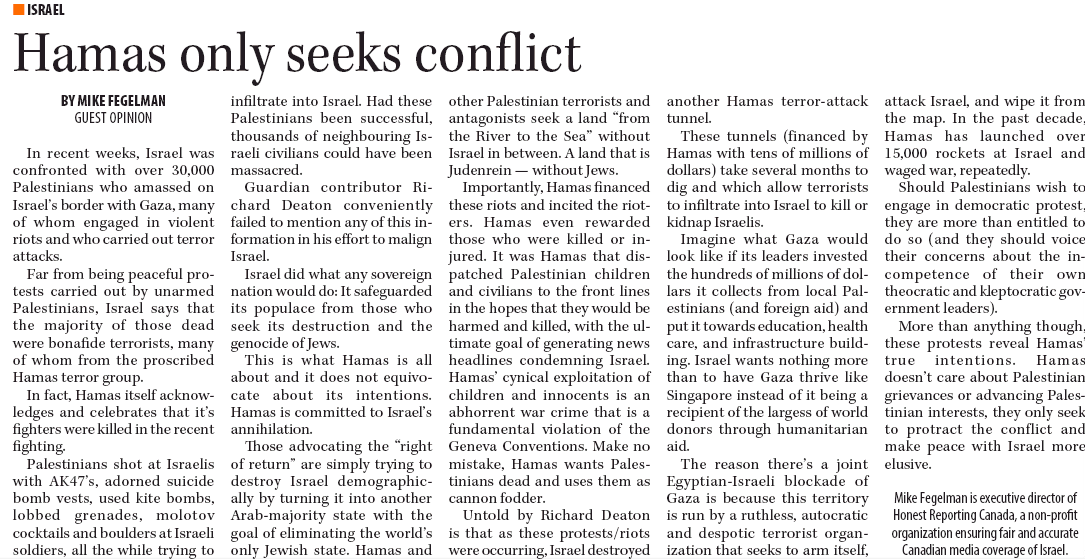 In recent weeks, Israel was confronted with over 30,000 Palestinians who amassed on Israel’s border with Gaza, many of whom engaged in violent riots and who carried out terror attacks.

Far from being peaceful protests carried out by unarmed Palestinians, Israel says that the majority of those dead were bonafide terrorists, many of whom from the proscribed Hamas terror group. In fact, Hamas itself acknowledges and celebrates that it’s fighters were killed in the recent fighting.

Palestinians shot at Israelis with AK47’s, adorned suicide bomb vests, used kite bombs, lobbed grenades, molotov cocktails and boulders at Israeli soldiers, all the while trying to infiltrate into Israel. Had these Palestinians been successful, thousands of neighbouring Israeli civilians could have been massacred.

Guardian contributor Richard Deaton conveniently failed to mention any of this information in his effort to malign Israel.

Israel did what any sovereign nation would do: It safeguarded its populace from those who seek its destruction and the genocide of Jews.

This is what Hamas is all about and it does not equivocate about its intentions. Hamas is committed to Israel’s annihilation. Those advocating the “right of return” are simply trying to destroy Israel demographically by turning it into another Arab-majority state with the goal of eliminating the world’s only Jewish state. Hamas and other Palestinian terrorists and antagonists seek a land “from the River to the Sea” without Israel in between. A land that is Judenrein – without Jews.

Importantly, Hamas financed these riots and incited the rioters. Hamas even rewarded those who were killed or injured. It was Hamas that dispatched Palestinian children and civilians to the front lines in the hopes that they would be harmed and killed, with the ultimate goal of generating news headlines condemning Israel. Hamas’ cynical exploitation of children and innocents is an abhorrent war crime that is a fundamental violation of the Geneva Conventions. Make no mistake, Hamas wants Palestinians dead and uses them as cannon fodder.

Untold by Richard Deaton is that as these protests/riots were occurring, Israel destroyed another Hamas terror-attack tunnel. These tunnels (financed by Hamas with tens of millions of dollars) take several months to dig and which allow terrorists to infiltrate into Israel to kill or kidnap Israelis.

Imagine what Gaza would look like if its leaders invested the hundreds of millions of dollars it collects from local Palestinians (and foreign aid) and put it towards education, health care, and infrastructure building. Israel wants nothing more than to have Gaza thrive like Singapore instead of it being a recipient of the largess of world donors through humanitarian aid.

The reason there’s a joint Egyptian-Israeli blockade of Gaza is because this territory is run by a ruthless, autocratic and despotic terrorist organization that seeks to arm itself, attack Israel, and wipe it from the map. In the past decade, Hamas has launched over 15,000 rockets at Israel and waged war, repeatedly.

Should Palestinians wish to engage in democratic protest, they are more than entitled to do so (and they should voice their concerns about the incompetence of their own theocratic and kleptocratic government leaders).

More than anything though, these protests reveal Hamas’ true intentions. Hamas doesn’t care about Palestinian grievances or advancing Palestinian interests, they only seek to protract the conflict and make peace with Israel more elusive.