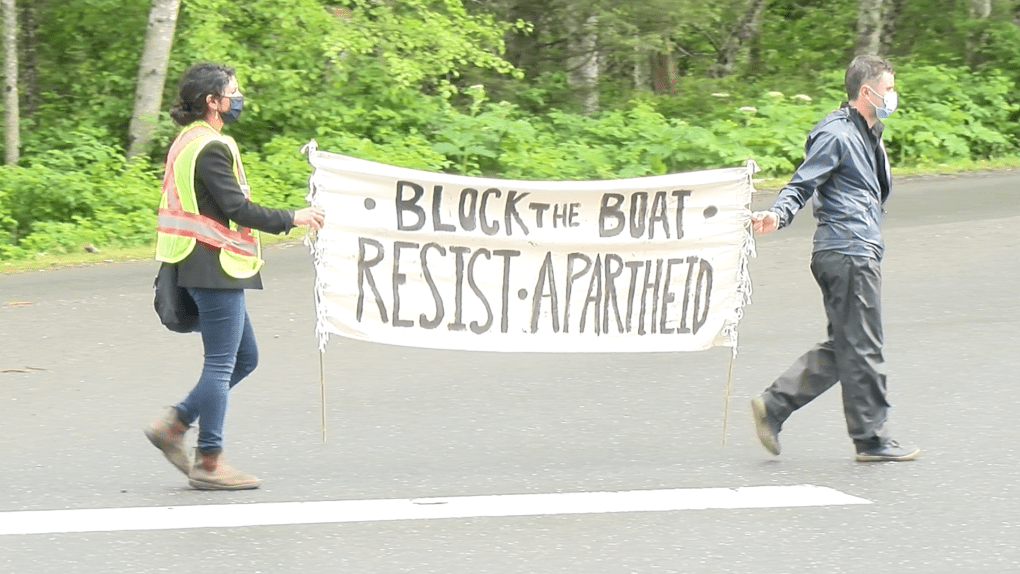 In the Prince George Citizen on July 18, HRC Marketing and Community Relations Associate Robert Walker commented on the actions of anti-Israel detractors in Prince Rupert, B.C., who refused to unload the cargo of a ship belonging to an Israeli company.

As Robert put it, the anti-Israel protest did more harm than good:

Boycotting Israel, whether by blocking Israeli ships in British Columbia, or any other action, not only is based on an egregious – and easily disproved – lie, but it serves to produce absolutely no benefit to the Palestinians, either. The only solution to the conflict between the Palestinians and Israel is to deepen and expand dialogue and cooperation, not to sever it.”

Read the full commentary immediately below or on the Prince George Citizen website.

In his recent oped “Opinion: Principled acts take courage,” Gerry Chidiac lauds the actions last month by workers at the Port of Prince Rupert, who refused to unload the cargo of a ship belonging to an Israeli company.

Chidiac writes that the actions were part of a larger movement called Block the Boat, which “seeks to draw attention to the injustices suffered by Palestinians by preventing Israeli ships, often transporting weapons, from docking at ports all around the world.”

It is profoundly disappointing to see anyone, particularly a high school teacher like Chidiac, promote this “protest” movement. There are two reasons to oppose these protests, both for ideological and practical reasons.

Firstly, while Chidiac compares these protesters to those defending Indigenous Canadians and Black South Africans under Apartheid, the comparison is ludicrous.

Despite the repeated attempts to paint Israel as some kind of colonialist enterprise in the Middle East, anyone with a modicum of knowledge of the region knows full well that Israel didn’t appear out of thin air in 1948. The Jewish People have lived in their historic homeland for more than 3,000 years, and continue to speak the same language and follow the same precepts as their ancestors did thousands of years ago. This is not an opinion; it is fact, backed up by copious amounts of archaeological and other data.

Despite having been occupied for thousands of years by a parade of foreigners, including Romans, Greeks, Arabs, Turks, and Britons, the Jewish People in Israel finally threw off the shackles of occupation and Israel, the independent Jewish State, was reborn in 1948. Today, more than two million of Israel’s citizens are Arabs, who enjoy full civil rights in all areas, including in government, where an Arab Israeli party forms part of the governing coalition. As such, when Chidiac compares Israel to Apartheid South Africa, it is more than simple misinformation; it is defamatory.

It is repugnant to the very concept of justice to support a cause that treats the Jews, a small, vulnerable group of people who endured literally millennia of oppression and occupation in their own homeland, as an illegal occupier.

But there is more than just an ideological problem with these protests; there is also a practical one. The act of blocking a ship belonging to an Israeli company in northern British Columbia – or anywhere else, for that matter, has absolutely no material benefit to anyone, least of all the Palestinians. While it is true that economic and other pressure did have material benefit in ending Apartheid in South Africa, that is because Black South Africans did not benefit from the country’s economy.

Conversely, in Israel, because the country’s Arab population is fully integrated in all parts of the economy, attempting to harm the Jewish State’s economy – which has failed to cause any harm, thankfully – ultimately helps nobody at all.

For example, the Israeli company SodaStream, which had previously housed a factory in Judea & Samaria – commonly called the West Bank – closed the factory partly as a result of international pressure in 2016. And while boycotters of Israel celebrated the news, there was one large group who didn’t – the 500 Palestinians – and their families – who were employed at the factory, all of whom lost their jobs as a result.

When a protest movement creates no benefit – and in fact, only harms – the very demographic that it seeks to be helping, then it is time for serious self reflection on the part of protesters and their supporters like Chidiac, who should be asking themselves exactly what is driving them to boycott a liberal, diverse and open society like Israel. It takes a special amount of privilege on the part of those thousands of kilometres away, here in Canada, to ask Palestinians to suffer from a boycott of Israel.

Boycotting Israel, whether by blocking Israeli ships in British Columbia, or any other action, not only is based on an egregious – and easily disproved – lie, but it serves to produce absolutely no benefit to the Palestinians, either. The only solution to the conflict between the Palestinians and Israel is to deepen and expand dialogue and cooperation, not to sever it. There are two peoples living in one small strip of land in the Middle East, and neither are going anywhere. It’s time that protesting workers in Prince Rupert, and their defenders recognize that fact. Otherwise, their efforts will continue to be an utter waste of time.