HRC In Post Millennial: “Have the Palestinians Missed the Boat on Mid-East Peace?”

In The Post Millennial, HonestReporting Canada’s Noah Lewis examines what the Abraham Accords means for a prospective Palestinian state and for once and for all resolving the Arab-Israeli conflict. 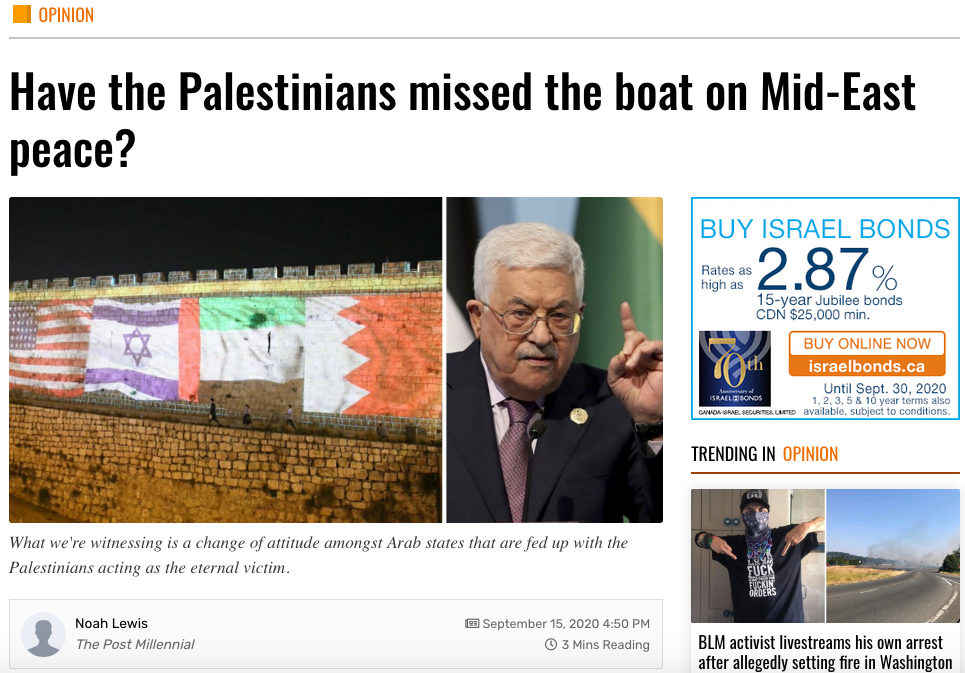 Coming just twenty-nine days after the United Arab Emirates (UAE) announced that they would formalize relations with the Jewish State, the Kingdom of Bahrain will now become the fourth Arab country to normalize diplomatic relations with Israel.

The signing ceremony of the Abraham Accord at the White House is a monumental event and historic accomplishment.

First and foremost, it’s important to acknowledge that such a deal between Israel and Bahrain would never have happened without Bahrain first obtaining the approval of Saudi Arabia, its close ally and benefactor. This goes to show that while maybe they have not yet publicly expressed support, behind the scenes, the Saudis are tacitly rooting for and supporting peace with Israel.

So what does this mean for the Palestinians? Well, all signs seem to point to the Palestinians having missed the boat, and it looks like their life raft is taking on water fast. They have just seen another one of their Arab League allies make peace with and diplomatically recognize “the enemy,” Israel, so you can imagine the Palestinian Authority and Hamas were less than thrilled with the news.

“Our Arab brothers have abandoned us,” said PLO Executive Committee member Ahmed Majdalani. Issuing a similar response to the normalization agreement between Israel and the UAE, the PA strongly condemned and rejected Bahrain’s decision, calling it a “betrayal of Jerusalem, Al-Aqsa Mosque and the Palestinian issue.” And once again, as was the case following announcement of the UAE deal, the PA Foreign Ministry announced that it would be immediately recalling its ambassador to Bahrain for consultations in protest of the normalization agreement.

Luckily for the Palestinians, an Israeli rescue boat is sailing near-by just over the horizon, ready to extend a life preserver known as the Trump Peace Plan, which serves to save the potential for a future Palestinian state from drowning once and for all. The years of the ostracized and isolated Jewish State in a sea of Arab of Muslim of countries who refused to recognize its basic right to exist is coming to an end—whether the Palestinians like it or not.

While it was never a realistic question, let alone even a possibility, these breakthroughs in Mideast diplomacy go to show that Israel isn’t going anywhere and that it will continue to exist as the homeland of the Jewish people.

For the PA to continue making threats to sever relations with any country that forms relations with Israel is a prime example of cutting off their collective nose to spite their face. The PA is only trying to save face in front of the Palestinian people, who they continue to use as political pawns in their failed pursuit of a Palestinian state encompassing all the land between the Jordan River and the Mediterranean Sea.

What we’re witnessing is a change of attitude amongst Arab states that are fed up with the Palestinians acting as the eternal victim. The Palestinians have had seventy-two years to capitalize on, to declare statehood, and to build their country, but they’ve failed to do so. Instead they have played the perpetual victim. Even their Arab allies are tired of their antics.

For decades we kept hearing that the only way to achieve peace in the Middle East is to resolve the Israeli-Palestinian conflict. But the onus for a solution was always placed solely in Israel’s hands. This kept the Jewish state constantly on the receiving end of global condemnation and opprobrium for not having done enough to secure peace.

If there was ever a time for the Palestinians to suck up whatever pride they have left and accept Israel’s legitimacy, make concessions and forge a lasting peace once and for all, it would probably be now.