HRC In National Post: Iran’s Maritime Attacks Show The True Cost Of Doing A ‘Deal With The Devil’ 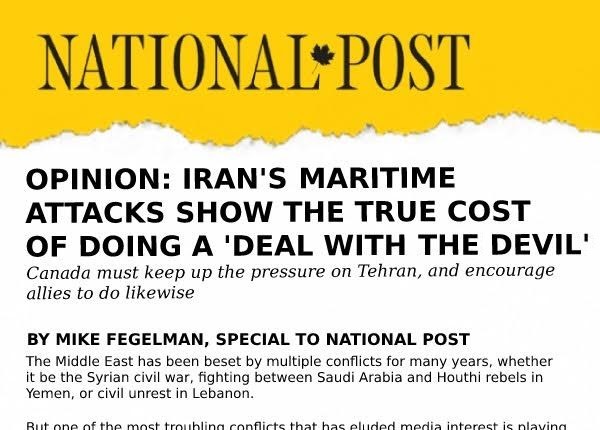 In a prominently placed op-ed in the National Post on August 7, HonestReporting Canada Executive Director Mike Fegelman commented on how Iran is conducting a shadow war against Israel and regional enemies, using maritime attacks to become a regional superpower and hegemon, by threatening its way back to international legitimacy, instead of joining the community of nations as a peaceful interlocutor.

Read the full op-ed on the Post’s website or immediately below.

The Middle East has been beset by multiple conflicts for many years, whether it be the Syrian civil war, fighting between Saudi Arabia and Houthi rebels in Yemen, or civil unrest in Lebanon.

But one of the most troubling conflicts that has eluded media interest is playing out just beneath the surface, with a dangerous, fanatical regime declaring war on regional enemies in a shadow war.

On July 30, an armed drone attacked an oil tanker off the coast of Oman, in the northern Indian Ocean, killing two crew members, one British and one Romanian. The ship, named the Mercer Street, was hit by the small device, which exploded upon impact. Crew members reported there had been an earlier attempted drone attack the same day, but it fell harmlessly into the ocean.

The tanker is managed by Zodiac Maritime, a company based in the United Kingdom, but owned by Eyal Ofer, an Israeli shipping billionaire.

Intelligence agencies, including those from Canada, the United Kingdom, Israel and the United States, all attributed the suicide drone attack to the Islamic Republic of Iran, with Israel blaming the the Iranian Revolutionary Guard Corps (IRGC) directly.

Global Affairs Canada posted on its official Twitter account a condemnation of the attack, saying that the intelligence community believes Iran was responsible, and adding that “Canada stands with the international community in upholding international security and holding Iran accountable for its reckless actions.”

The attack on the Mercer Street was far from an isolated incident. Within days, a number of foreign oil tankers off the Gulf of Oman reported that they were digitally and physically hijacked, all brazen acts of war in violation of international law.

Although Canadian and other intelligence agencies have not publicly shared their evidence of Iranian involvement in the attacks, the incidents bear all the hallmarks of Iranian responsibility. For years, the Iranian regime has threatened to close the Strait of Hormuz to international shipping and navigation in the event of armed conflict, and the country is an active sponsor of extremist Islamist terrorist activities throughout the region, namely with Hezbollah in Lebanon, in its pursuit of regional hegemony.

For the past two years, the waters off the United Arab Emirates have seen a series of explosions and hijackings, with the U.S. Navy blaming Iran for limpet mine attacks that damaged oil tankers. Earlier this year, the Israeli-owned ships Helios Ray and Hyperion Ray were also attacked.

While Iran has predictably denied all knowledge and responsibility for these attacks, in reality, it benefits significantly from plausible deniability. By attacking foreign vessels, either with drones or by using digital warfare, Iran’s regime simultaneously is able to intimidate neighbouring countries across the Middle East, while also denying it had any involvement. 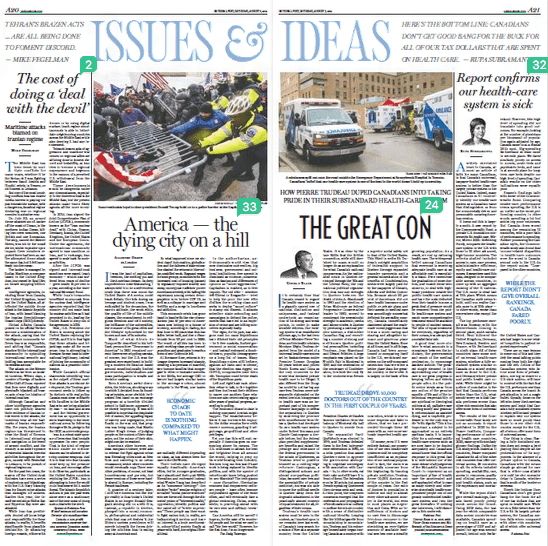 Tehran’s brazen acts of aggression and maritime war crimes on regional allies are all being done to foment discord and instability, as Iran tries to become a regional superpower and hegemon in the vacuum of a perceived U.S. withdrawal from the Middle East.

These developments would be dangerous under any circumstances, especially in the tinderbox that is the Middle East, but the present attacks make Iran’s likely agenda all the more worrying.

In 2015, Iran signed the Joint Comprehensive Plan of Action (JCPOA), commonly known as the “Iran nuclear deal,” with China, France, Germany, Russia, the United Kingdom, the United States and the European Union. Under the agreement, the international community agreed to ease sanctions on Iran, and in exchange, Iran agreed to scale back its nuclear activities. 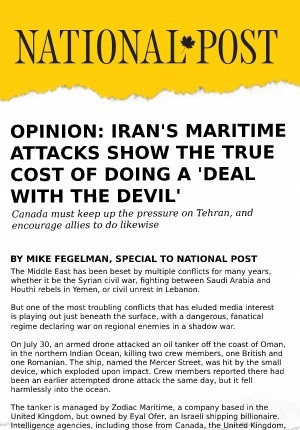 After the JCPOA was signed and international sanctions were eased, Iran’s economy — which had suffered from years of decline — grew nearly 13 per cent in a year, according to the International Monetary Fund.

While Iran’s treasuries benefited enormously from the nuclear deal, intelligence agencies reported that the country did not scale back its nuclear activities as it had promised to do, leading the United States to drop out of the agreement in 2018.

Now, U.S. President Joe Biden is musing about the United States rejoining the JCPOA, and it is in that light that these attacks and hijackings make all the more sense: Iran is attempting to threaten its way back to international legitimacy, instead of joining the community of nations as a peaceful interlocutor.

While Canada’s official statements identifying Iran as the culprit of these maritime attacks is a welcome development, the Trudeau government needs to follow up its rhetoric with real policy. Canada must show solidarity with its allies in the Middle East who are being attacked by Iran — on land and at sea — and the federal government has an opportunity to show leadership in the international arena by following through with its pledge to list the IRGC as a terrorist group.

Iran is a robust state sponsor of terrorism that brutally oppresses its own people. That is the kind of regime which under no circumstances can be allowed to develop nuclear weapons. And it is in that vein that Canada must keep up the pressure on Iran, and encourage allies to do likewise, particularly as the United States considers rejoining the JCPOA. Iran is attempting to force the world to do business with it under threat. The Islamic Republic’s actions in just the past week alone serves as a cautionary tale of the true costs of doing such a deal with the devil.