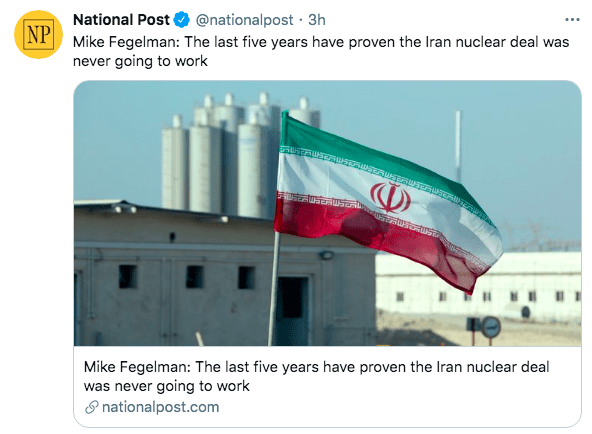 Today, the National Post prominently featured an HonestReporting Canada op-ed that exposed the fundamental flaws of the JCPOA, also known as the Iran Nuclear Deal, an agreement which didn’t block Iran’s pursuit of nuclear weapons, it only delayed it and accelerated its atomic ambitions.

Read our full op-ed on the Post’s website or immediately below.

True to his election promise, U.S. President Joe Biden has reportedly undertaken efforts to rejoin the Iranian nuclear deal, with Secretary of State Antony Blinken warning that Iran could procure enough fissile material to build a nuclear weapon within weeks.

Senior Biden administration officials have held unofficial talks with the Iranian regime about how the United States can rejoin the 2015 nuclear agreement, known formally as the Joint Comprehensive Plan of Action (JCPOA). Although the deal was never formally abrogated, America’s departure from it in 2018 was a major setback for the deal, its architects and its proponents.

The agreement sought to curtail Iran’s nuclear ambitions by providing economic incentives in the form of sanctions relief, in exchange for the regime agreeing to suspend, albeit temporarily, its nuclear program. While well-intentioned, the JCPOA was fatally flawed as it never sought to deny Iran’s ability to acquire nuclear weapons, only to delay it. In fact, once the deal’s “sunset provisions” expire, the cessation of various restrictions imposed on Iran’s nuclear program provide Tehran with a pathway to acquire nuclear weapons.

Of the deals many flaws, the following elements remain deeply problematic and deserve renewed scrutiny.

First, thanks to the JCPOA, in a decade, Iran will possess enough nuclear material to build dozens of bombs. Alarmingly, Iran is able to develop weapons of mass destruction in full compliance with the letter and spirit of the agreement. The reality on the ground over the last five years has shown that the JCPOA didn’t stop, or even slow down, the Iranian nuclear program. Indeed, the agreement didn’t shutter a single nuclear facility.

Under the deal, Iran is permitted to stockpile as much as 300 kilograms of enriched uranium, a key ingredient in nuclear weapons. In September 2020, the International Atomic Energy Agency (IAEA) reported that Iran possessed more than 2,400 kilograms of enriched uranium — far above the approved threshold and putting it within reach of producing weapons-grade nuclear material.

While Iran claims the uranium is for peaceful energy purposes, the reality is that the world cannot trust a regime with such a long track record of deception. After all, the goal of the deal was to put in place a system that would allow the international community to verify what was happening on the ground. That Iran never granted IAEA inspectors access to sites suspected of playing a role in a possible military nuclear program exposed another fundamental flaw of the JCPOA.

Secondly, several years ago, Israel exposed Iran’s secret nuclear archive, which, among its many thousands of pages and files, contained documents detailing undeclared nuclear sites and radioactive materials, as well as blueprints for how to weaponize its nuclear program. This secret archive proved that Iran’s nuclear-weapons program didn’t stop in 2003; it was merely using its civilian nuclear program as a cover to develop nuclear weapons.

Third, the massive influx of cash given to the Iranian regime gave a much-needed boost to its terrorist proxies throughout the Middle East. As part of the deal, Iran was given access to upwards of C$190 billion in assets that had been frozen in foreign banks. When those funds became available to the Iranian regime, money began flowing to Shiite terrorist groups, including Hezbollah and various Houthi groups in Yemen. 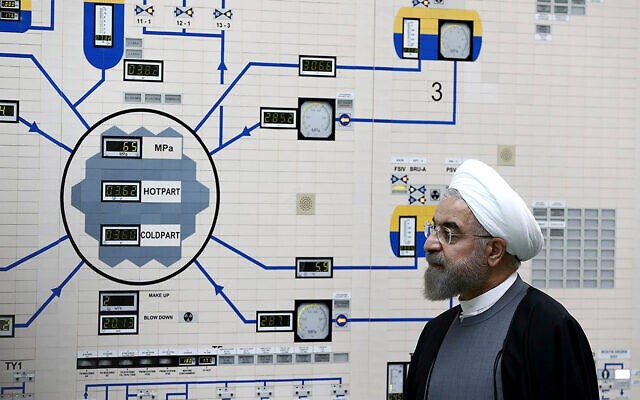 Critics argued that the funds belonged to Iran to begin with. But those assets were frozen by courts in North America and Europe precisely because of Iran’s funding of terrorism. Releasing hundreds of billions of dollars to a fanatical and malevolent regime was always going to be a recipe for disaster.

Fourth, the JCPOA missed the elephant in the room: functional warheads and ballistic missiles. The Iranian regime’s ability to affix warheads on intercontinental ballistic missiles was altogether ignored in the deal. Iran knows this is a significant void, and its leaders have been clear that they will not renegotiate on this issue.

The potential of a nuclear-armed Iran poses a clear and present danger, not just to its immediate neighbours, but also to the broader Middle East and the rest of world. After all, if the JCPOA is the best means of blocking Iran’s pathways to acquiring nuclear weapons, why are Israel, the United Arab Emirates and Saudi Arabia cautioning against the U.S. rejoining the deal? Perhaps those with skin in the game know better.

It is true that the piercing sanctions regime that was in place before the JCPOA wasn’t the silver bullet many had hoped it would be, as it failed to change Iran’s malign behaviour. But it did great damage to the Iranian economy. More sanctions over a prolonged period of time may provide more leverage for a better deal.

The new Biden administration may look at the JCPOA as a salvageable international agreement, and its desire to bring peace and stability to the Middle East is a noble pursuit, but any agreement must be based on verifiable standards that Iran can be held to. Unfortunately, the Iran nuclear deal has failed in that regard. The Biden administration would be well advised not to rejoin the JCPOA.