HRC In Jewish Independent: Taking a Stand Against Antisemitic Hate in Vancouver

Vancouver’s Jewish Independent newspaper published an HRC op-ed which commented on recent instances of antisemitism that have surfaced in Vancouver, where hate mongers used the COVID-19 pandemic as a pretext to foment hatred against Jews. 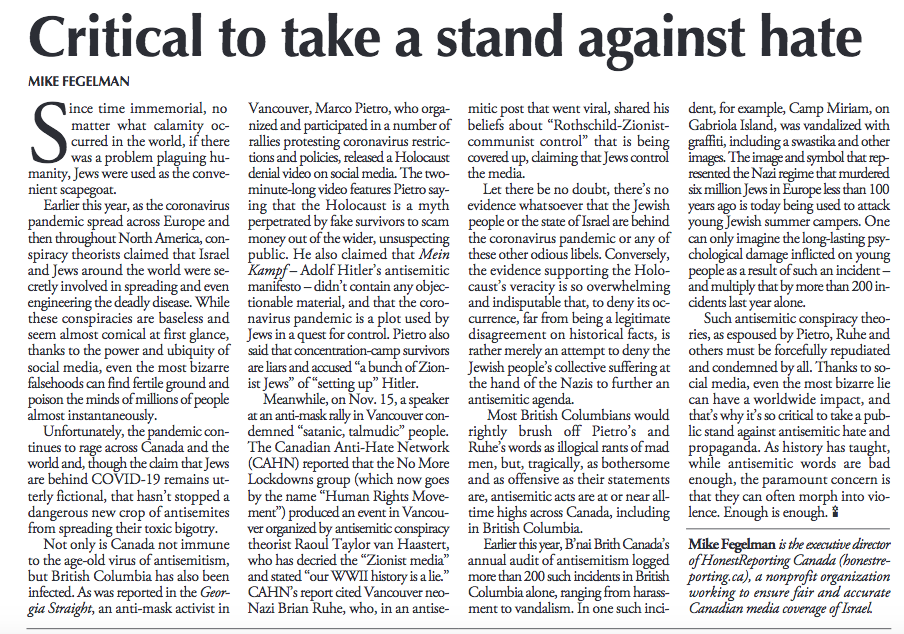 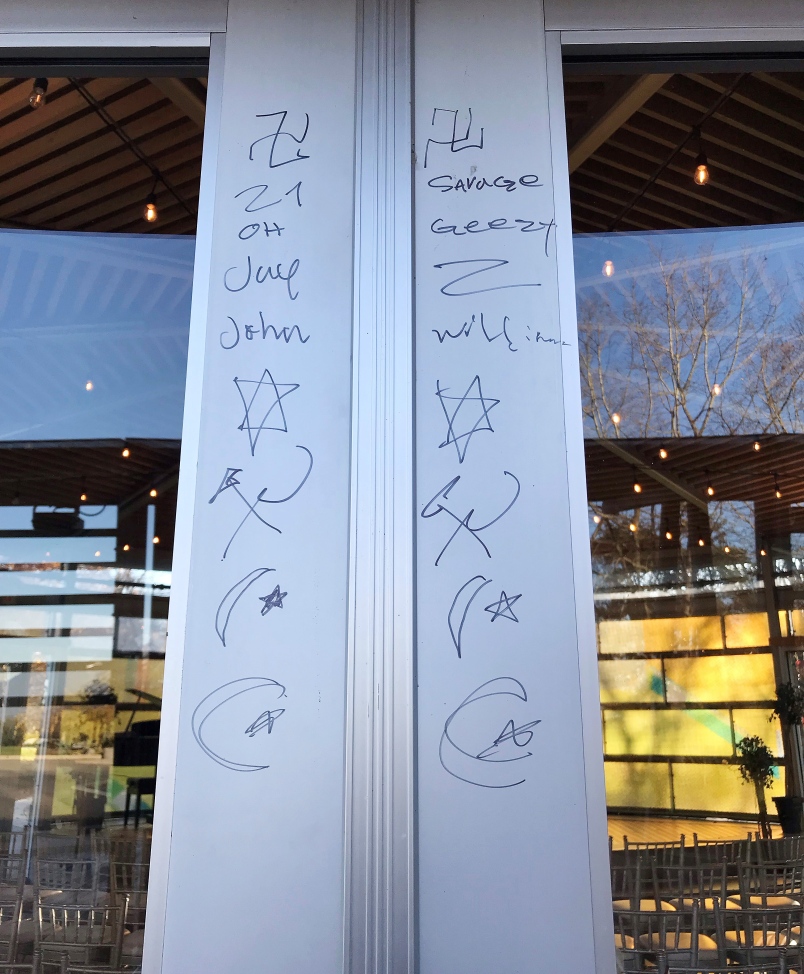 Since time immemorial, no matter what calamity occurred in the world, if there was a problem plaguing humanity Jews were used as the convenient scapegoat.

Earlier this year, as the coronavirus pandemic spread across Europe and then throughout North America, conspiracy theorists claimed that Israel and Jews around the world were secretly involved in spreading and even engineering the deadly disease. While these conspiracies are baseless and seem almost comical at first glance, thanks to the power and ubiquity of social media, even the most bizarre falsehoods can find fertile ground and poison the minds of millions of people almost instantaneously.

Unfortunately, the pandemic continues to rage across Canada and the world, and though the claim that Jews are behind COVID-19 remains utterly fictional, that hasn’t stopped a dangerous new crop of antisemites from spreading their toxic bigotry.

Not only is Canada not immune to the age-old virus of antisemitism, but British Columbia has also been infected. As was reported in The Georgia Straight, an anti-mask activist in Vancouver, Marco Pietro, who organized and participated in a number of rallies protesting coronavirus restrictions and policies, recently released a Holocaust denial video on social media. The two-minute-long video features Pietro saying that the Holocaust was a myth perpetrated by fake survivors to scam money out of the wider unsuspecting public. He also claimed that Mein Kampf – Adolf Hitler’s antisemitic manifesto – didn’t contain any objectionable material, and that the coronavirus pandemic is a plot used by Jews in a quest for control. Pietro also said that concentration-camp survivors are liars and accused “a bunch of Zionist Jews” of “setting up” Adolf Hitler.

Meanwhile, on November 15, a speaker at an anti-mask rally in Vancouver condemned “Satanic, Talmudic” people. The Canadian Anti-Hate Network (CAHN) reported that the No More Lockdowns group (which now goes by the name “Human Rights Movement”) produced an event in Vancouver organized by antisemitic conspiracy theorist Raoul Taylor van Haastert, who has decried against the “Zionist media” and stated “our WWII history is a lie.” CAHN’s report cited Vancouver neo-Nazi Brian Ruhe who, in an antisemitic post that went viral, told his beliefs about Rothschild-Zionist-Communist control which are being covered up, claiming that Jews control the media.

Let there be no doubt, there’s no evidence whatsoever that the Jewish people, or the State of Israel, are behind the c 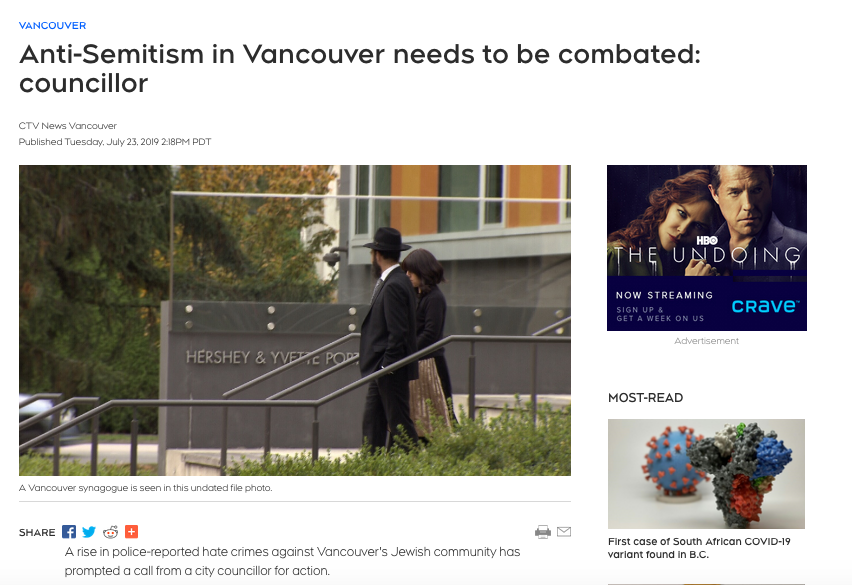 oronavirus pandemic or any of these other odious libels. Conversely, the evidence supporting the Holocaust’s veracity is so overwhelming and indisputable that to deny its occurrence is, far from being a legitimate disagreement on historical facts, is rather merely an attempt to deny the Jewish people’s collective suffering at the hand of the Nazis to further an antisemitic agenda.

Most British Columbians would rightly brush off Pietro’s and Ruhe’s words as illogical rants of mad men, but tragically, as bothersome and as offensive as their statements are, antisemitic acts are at or near all-time highs across Canada, including in British Columbia.

Earlier this year, B’nai Brith Canada’s annual audit of antisemitism logged more than 200 such incidents in B.C. alone, ranging from harassment to vandalism. In one such incident, for example, Camp Miriam, a Jewish summer camp on Gabriola Island, was vandalized with graffiti, including a swastika and other images. The image and symbol that represented the Nazi regime which murdered six million Jews in Europe less than 100 years ago is today being used to torture young Jewish summer campers in Western Canada. One can only imagine the long-lasting psychological damage inflicted on young people as a result of such an incident. And now, multiply that by more than 200 incidents last year alone.

Such antisemitic conspiracy theories, as espoused by Pietro, Ruhe, and others must be forcefully repudiated and condemned by all. Thanks to social media, even the most bizarre lie can have a worldwide impact, and that’s why it’s so critical to take a public stand against antisemitic hate and propaganda. As history has taught before, while antisemitic words are bad enough, the paramount concern is that they can often morph into violence. Enough is enough.