In Israel’s most widely-read newspaper Israel Hayom today, HRC Executive Director Mike Fegelman observed that the message that Palestinian terror groups are sending to the world by holding military-type drills is that they are showing where their priorities lie, particularly during the coronavirus pandemic.

Read our latest commentary on the Israel Hayom website or immediately below. 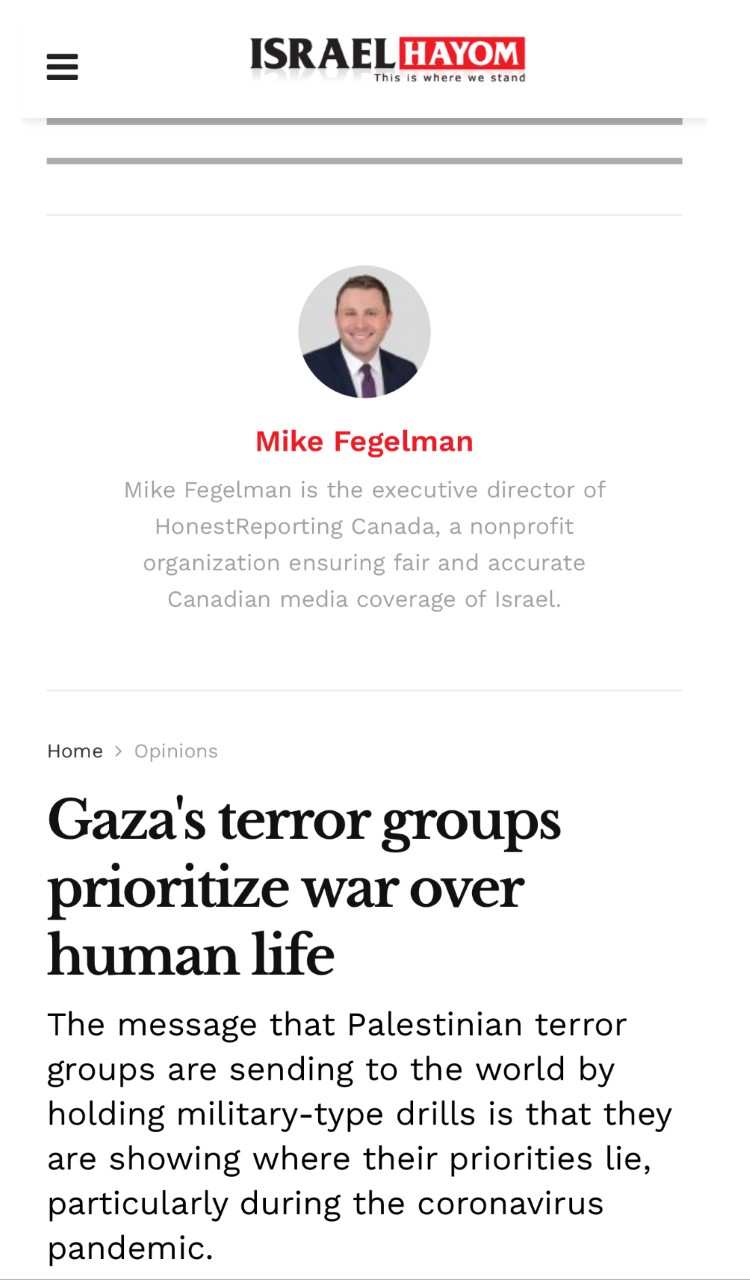 Groups such as Hamas and Palestinian Islamic Jihad, among nearly a dozen other smaller terrorist groups that have fought for supremacy in Gaza, joined forces for the drill.

So far, the actions taken include firing rockets into the sea, piloting drones in the sky, and other efforts aimed at showing their military capabilities and tactical threats against Israel.

Abu Hamza, a spokesperson for Palestinian Islamic Jihad, was quoted as saying the exercises were meant to send a message to Israel, but while they claim the drills are of a defensive nature, their own public statements make no secret of their willingness to act as aggressors by engaging militarily with Israel.

“The armed groups are today stronger and more capable of confronting and deterring the enemy. We won’t allow the enemy to impose rules of engagement on us,” Hamza said.

Hamas and Islamic Jihad are, of course, not legitimate armed forces that adhere to the laws of armed conflict or who have respect for innocent civilian life. They are both extremist Islamist terrorist groups that have sent suicide bombers into Israeli stores, fired rockets indiscriminately into Israeli population centers, and have sought to cause as much death, destruction and mayhem as possible on Israeli civilians.

Another message that these Palestinian terror groups are sending to the world is that by conducting public, military-type drills and exercises, they are showing where their priorities lie, particularly during the coronavirus pandemic.

Instead of allocating its finances, personnel and most importantly, focusing its efforts into enhanced public health precautions by securing vaccinations for their rapidly growing population and for the most vulnerable members of society, they’re firing rockets into the sea in a misguided display of aggression aimed at showing the world that they will never accept Israel’s right to exist.

The drills are also aimed at stressing Hamas and Islamic Jihad’s opposition to the peace process. A spokesperson for the terrorist groups said that the exercises should also be interpreted as a rejection of the growing number of peace agreements announced between Israel and other Arab states.

It’s not as if Gaza has escaped the coronavirus pandemic. Earlier in December, the Palestinian Health Ministry in the Gaza Strip reported a sharp increase in the number of both confirmed infections and deaths. In fact, the deteriorating health situation in the enclave has become so acute that mosques and schools have closed in an attempt to slow the rising caseload.

With the reality so bleak for Gaza, the question being asked by news media outlets should be why Hamas – the so-called government of Gaza – is prioritizing war with Israel over the lives of its own people.

These “drills” are an expensive and pointless publicity stunt that not only glorifies violence against Israel, it shows the true priorities of Hamas and their peers in continuing warfare, rather than improving the quality of life for their own people.

One only need look at Israel to see what responsible governance looks like. Israel leads the world in the percentage of the population inoculated with vaccines per capita, and may be among the first countries in the world to look at the coronavirus pandemic in the rear-view mirror. If Hamas truly cared about its people, firing rockets into the sea would not be their priority.

It’s undoubtedly true that the residents of Gaza do not live easy lives, but it’s equally important to recognize the true culprit of their misfortune. The enemy of the Palestinian people is the maniacal, murderous and fundamentalist Hamas regime which publicly executes suspected collaborators, ceaselessly threatens Israel and otherwise keeps nearly two million Gazans in a perpetual state of poverty for political ends.

Bemoaning the true plight of Gazans while assigning no blame to the party responsible for their misfortune is doing no favours to anyone; rather, it is merely the soft bigotry of low expectations.