HRC in IPolitics: "Stop Blaming Israel for Every Drop of Blood Spilled in the Middle East” 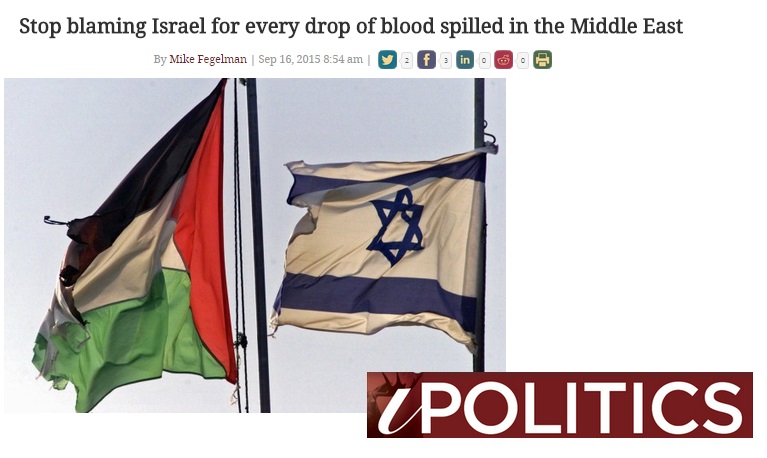 The idea – expressed in Jeff Sallot’s iPolitics commentary “No, Mr. Harper — you can’t fix a refugee crisis by blowing things up” – that solving the Israeli-Palestinian conflict is the key to solving the broader problems of the Middle East, including the Syrian refugee crisis, indicates a basic ignorance of regional events.

Sallot reveals his naiveté when arguing that “… the biggest single factor poisoning politics and fueling violent conflict in the Middle East today is the long-unresolved issue of Israel and the Palestinians.” In the era of the Arab Spring, which saw protesters in Egypt, Tunisia, Iran, Bahrain, Yemen and Libya stand up against the tyranny, lack of freedom and economic crises in their own countries — not against Israel — Sallot is out of touch with reality.

The protests that plagued the dictatorial regimes in these countries could not be solved with a sudden resolution of the Palestinian-Israeli conflict because that conflict does not address their grievances. Were a Palestinian state to be established tomorrow, would Iranian mullahs abandon their pursuit of nuclear weapons? Would Iran cease interfering in Syria, Lebanon, Gaza, and Iraq? Would Saudi Arabia stop beheading and executing hundreds of its own citizens? Would Lebanon enfranchise the millions of Palestinian refugees living in squalor in its refugee camps? Would the establishment of a Palestinian state solve the Sunni-Shiite sectarian wars raging throughout the region? Would it end the radical Islamization of the Middle East? Indeed not.

The civil war in Syria has nothing to do with the Israeli-Palestinian conflict — nor does the ascendancy of ISIS and the targeting of minorities and ethnic cleansing of Christians by radical Islamists.

Sallot writes: “If you trace the history of terrorism back to before the al Qaida 9/11 attacks, to the Black September attack on Israeli athletes at the 1972 Munich Olympics, you’ll find ample evidence that Palestinian grievances have been successfully exploited by terrorists to spawn more terrorism.”

Although Mr. Sallot ably conveys the Palestinian perspective on the conflict, it must be remembered that the conflict centers on disputed territory, not ‘Palestinian land’.

If terror groups like ISIS and al Qaida have exploited “Palestinian grievances” to advance their own interests, that blame should not be placed on Israel’s doorstep. And Mr. Sallot should not be obtuse about the legitimate “Israeli grievances”, such as continued Palestinian terror, incitement to violence and efforts to challenge the legitimacy of the Jewish state and self-determination of the Jewish people.

Sallot’s bemoaning of American economic and military aid to Israel reveals his preference that Israel be denied a qualitative and quantitative military advantage against enemies who seek to wipe the world’s only Jewish state from the map.

Years of official Palestinian Authority and Hamas incitement against Israel have made any support for a two-state solution unpopular in the Palestinian territories, though it remains Israel’s preference. Indeed, erasing Israel from maps and naming schools after “martyrs” like Dalal Mugrabi — the terrorist who hijacked a schoolbus in 1978 and murdered 37 Israelis — ensures that Palestinian children, weaned on terror, are unprepared for peace.

Had the Palestinian Authority honoured its Oslo commitments to refrain from incitement, today’s generation of Palestinians may have supported a two-state solution. But today, resolution of the conflict remains impeded by a continued intolerance of a Jewish presence in the Middle East.

Contrary to Sallot’s contention, the scourge of radical Islam is what fuels conflict in the Mideast today. It’s aided by authoritarian regimes in a region that is a black hole when it comes to human rights — and a breeding ground of extremism.

Procuring peace requires critical thinking and a comprehensive, moral and rational understanding of the facts, failing which, Mideast peace will continue to remain elusive.