HRC in Huffington Post: "When Criticism of Israel Becomes Anti-Semitism" 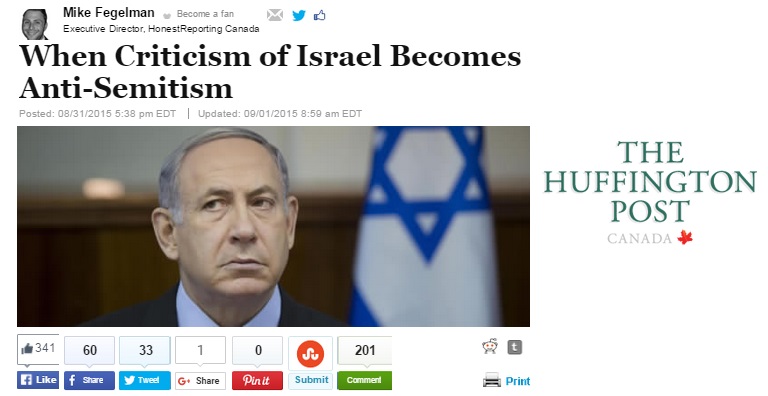 This commentary was co-authored by Josh Benjamin, Research Analyst at HonestReporting Canada.

No country is perfect and it certainly isn’t difficult to find imperfections in every country in the world. Indubitably, some countries are more flawed than others. Surely Iran, Cuba and North Korea have more flaws than the United States, Canada and Israel combined.

No country should be beyond legitimate criticism and all should be measured against the same yardstick, but when you single out one country over all others, namely Israel, and hold it to a unique standard and put it on the receiving end of exclusive censure, it’s anti-Semitism, plain and simple.

Tyler Levitan’s recent Huffington Post commentary overlooks this important fact. Through his support for BDS (boycott, divestment, and sanctions) and the demonization of Israel, Mr. Levitan either intentionally or unwittingly aligns himself with countries, organizations, individuals and ideologies that seek Israel’s destruction.

BDS advocates recently revealed themselves as bigots, hate mongers, and anti-Semites when pressuring the Rototom Sunsplash reggae festival demanding that Jewish reggae artist Matisyahu issue a statement in support of Palestinian statehood, a demand which Matisyahu refused which then saw the organizers cancel his performance. Matisyahu was the only artist at the festival asked to issue such a statement and he was targeted simply because he was Jewish. In fact, his national origin is not even Israel, he’s simply an American-Jewish artist, though to discriminate against him even if he were an Israeli would be bad enough, but Matisyahu was targeted simply because of his Jewish faith and because he supports the Jewish state: this is fundamentally anti-Semitic. Only after festival organizers were rebuked for their discriminatory actions, did they re-invite Matisyahu to perform, which he defiantly did in front of thousands (some waving Palestinian flags) where he performed his monumental hit song “Jerusalem.”

Taking a step backwards, let’s look at the United Nations Humans Rights Council (UNHRC). In its first year of existence, 2006, the UNHRC only filed resolutions against Israel. In its second year, all but one resolution was against Israel. In the resolutions, the UNHRC overwhelmingly blamed Israel and like the Canadian media habitually does, it neglected to mention that Palestinian terrorists instigated fighting with Israeli civilians and its Defense Forces.

In 2006, Robert Mugabe’s regime was torturing innocent civilians, Kim Jong-Un put entire families in brutal labour camps and women in Saudi Arabia were beheaded for being rape victims. That same year, the UNHRC believed only Israel deserved a resolution for its so-called, “lack of human rights.” Israel could retreat to the 1967 armistice lines, free all Palestinian terrorists from its jails and even disarm their entire military and still, the UNHRC would blame Israel for being a barrier to peace. As former Israeli Ambassador to the United Nations, Abba Eban once said : “If Algeria introduced a resolution declaring that the earth was flat and that Israel had flattened it, it would pass by a vote of 164 to 13 with 26 abstentions.”

The only reason Israel is targeted so frequently at the UN is because the Arab, Muslim and non-aligned bloc hold sway in the UN. In effect, the inmates run the asylum. Similarly in the media, Israel is subjected to extreme partiality. How often does one hear about Assad murdering hundreds of thousands, or Raul Castro abusing the rights of Cubans in mainstream media, versus how often Israel is brought up and vilified for everything under the sun? It’s not anti-Semitic for a news organization to run a story on Israel at the same rate they write articles on Zimbabwe, Sudan and Syria, but when Israel is brought up and criticized every day, in every paper/news broadcast and the atrocities committed by despotic regimes in the Mideast region are ignored, it’s no longer anti-Israel, it’s anti-Semitic.

The 3D test of anti-Semitism was invented by Natan Sharansky, prominent Israeli politician, author and human rights activist. His test detects whether someone is simply criticizing Israel, or if their so called “criticism” is really antisemitism. The three Ds stand for: Delegitimization, Demonization, and subjecting Israel to a Double Standard. If someone’s actions fit one or more of the three Ds, it’s anti-Semitic. When people who criticize Israel implement anti-Semitic tropes such as caricatures of Israelis with long hooked-noses dressed disheveled or looking for money, that’s anti-Semitic and isn’t anti-Israel. When Israelis are accused of being involved in conspiracy theories like controlling the media, economy or government, that’s also anti-Semitic.

When Israelis are compared to Nazis, it thereby lessens the magnitude of the Holocaust and implies that Israel’s treatment of Palestinians is identical to the Nazis treatment of Jews. This belief is so incredibly fallacious and anti-Semitic, that a conflict which has killed roughly 24,000 in almost seventy years is as bad as the Holocaust, which took the lives of 6,000,000 Jews in just six years. When Israel is held to a much higher standard than other nations, that too is antisemitic. As mentioned before, the fighting between Israel and the Palestinians has killed 24,000 since 1948. Just eight months into 2015, the war in Afghanistan has killed over 20,000, the Syrian civil war has killed 33,000 and just 27 have been killed in the Palestinian–Israeli conflict. There have been over thirty-eight conflicts so far in 2015 that have had a higher death toll than the Palestinian-Israel conflict, yet Israel is condemned, boycotted, and shunned by the international community.

When was the last time anyone heard of a movement to boycott products made in Pakistan, or a rally to speak out against oppressive governments such as Cuba, Saudi Arabia or North Korea? We all know these governments are guilty of deplorable actions on their citizens, but the general population choose to overlook that and instead focus their energies on Israel. While millions in the world suffer from terrorism, lack of human rights, are oppressed and silenced by their governments, the international community chooses to focus on Israel, a country of eight million people, the size of New Jersey. Why? The only reasonably explanation is that Israel is the only Jewish state, the only nation in the world where the majority of its citizens are Jews.

Israel isn’t perfect, but neither is any other country. Criticism of Israel is good as it generates discussion and provides a forum for change, but we shouldn’t be obtuse to how no other country in the world is loathed, demonized and the victim of absurd campaigns like BDS but Israel and no country is investigated at the UN like Israel and assailed in the headlines by our news media.

When the scrutinization of Israel becomes so extreme and Israel is constantly put under a microscope, it no longer is anti-Israel, it’s fundamentally antisemitic.

This commentary was co-authored by Josh Benjamin, Research Analyst at HonestReporting Canada.