HRC in Huffington Post Canada: "Trudeau Is Correct In His Condemnation Of BDS" 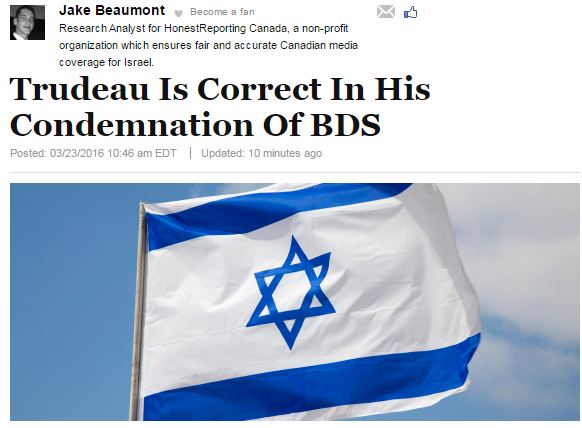 In overwhelmingly condemning BDS in the House of Commons recently, Canadian parliamentarians have greatly advanced the prospects for peace between Israelis and Palestinians.

BDS, which stands for boycott, divestment, and sanctions, is a movement which seeks Israel’s destruction and which denies Israel’s right to self-determination, a UN guaranteed right given to all nations.

The BDS movement singles out Israel for exclusive censure encouraging boycotts of Israeli goods, which produces an outcome that also harms Palestinians, as their economy is closely intertwined with Israel’s.

Moreover, the motion passed and which was supported by PM Justin Trudeau himself, holds no actual bearing of legality — so BDS supporters will not be arrested for simply espousing their views. Notably, just as BDS supporters (still) have the free speech to condemn Israel, so too does the government have the right (and responsibility) to condemn BDS. After all, BDS pushes for a one-state solution, undermines peace talks, demonizes Israel and downplays Palestinian terrorism. Essentially, BDS enables and incites those who cause harm to innocent Israelis.

When Huffington Post Canada blogger Kyle Brown claims that “The BDS crackdown is dangerous for democracy,” and when he proclaims that BDS is a legitimate movement with only peaceful means, he’s being disingenuous to the extreme.

Firstly, it’s important to point out that two of Israel’s most outspoken critics Norman Finkelstein and Noam Chomsky have both condemned BDS for its impracticality and idiocy. Even the leader of the Palestinian Authority, Mahmoud Abbas, has said he disagrees with the movement. This alone should raise some red flags on the legitimacy and true ideologies of the movement.

Brown mentions that BDS has never called for the elimination of Israel, but fails to mention that BDS calls for a Palestinian “right of return,” which would flood Israel with millions of refugees, effectively eliminating the existence of the Jewish state. Indeed, BDS co-Founder Omar Barghouti has called many times for the “right of return” of millions of Palestinian refugees and a one-state solution. This is simply an unfeasible solution as it calls for the obliteration of a Jewish state, being that a one state solution would lead to mass civil war between Israelis and Palestinians and would result in Israel becoming a Palestinian Arab state leading to Israel’s end through demographic means. Barghouti has also stated he is opposed to the existence of a Jewish state altogether.

Ironically enough, BDS protests against the Israeli company SodaStream to move out of the West Bank resulted in the loss of jobs for hundreds of Palestinians, all who received wages double to that of what Palestinians regularly receive in the West Bank. Were BDS to succeed in their protests entirely, it would result in the loss of thousands of more Palestinian jobs. It is clear their hate for Israel overrides their true support for Palestinians simply looking to feed their families. BDS also encourages Palestinian-Arab leaders not to associate with Israeli peace partners — which also serves to undermine a real peace process.

Brown disputes accusations of the anti-Semitic label that is (rightfully) labelled to many BDS supporters. One example of BDS revealing their anti-Jewish undertones, is when they forced concert promoters to prohibit Detroit-native reggae singer Matisyahu from performing because of his professed support for Israel. He had no political history with Israel, is not an Israeli citizen even, and his music itself is apolitical. This attack on someone for his political belief simply because he is a Jew reveals their true intentions. To hold an American-Jew for responsibility of Israel’s actions and ban him from performing at a concert is simply anti-Jewish and anti-Semitic.

Indeed, many BDS supporters also falsely claim that Israel is a “racist” and “apartheid” state, that partakes in ethnic cleansing, allegations that serve to inflame tensions and tarnish Israel’s reputation.

As we live in a free democracy, it’s our right to protest what and who we want. There’s no disputing this. There is nothing inherently wrong with protesting Israel and its policies. However, why is so much attention directed towards Israel, when there are many more countries who warrant protestation, namely Iran, Saudi Arabia, and China — countries who egregiously violate human rights every day? Even so, to protest Israel in itself is acceptable, however, it’s hypocritical to protest Israeli goods, services and products, while surreptitiously using them on the other hand. The best example of this is the hypocrite Omar Barghouti, the leader of the BDS, who studied at Tel-Aviv University where he pays for and supports Israeli education, while living in Haifa.

Furthermore, Brown lists many misleading facts in his article. He states that Israel is leading an illegal occupation, when in reality, the land obtained was in a defensive war, and was recognized as legal by the UN in 1967, as per Resolution 242, and was even further recognized under international law, when Arafat signed the Oslo Accords, granting Israel civil and security control over Area C and security control over Area B.

To say Israel controls Palestinian water supply is also misleading and oversimplified. The Oslo II accords stipulates the manner in which the parties must act according to international law — in which Israel is within its accordance. Israel even provides more water to Palestine than is required by the agreement.

It’s also no wonder why Israel withheld tax revenues, as the Palestinian government pays tens of millions of dollars per year to pay terrorists rewards for killing innocent Jews. The Palestinian Authority was also hundreds of millions of dollars in debt to Israeli electric companies and were to the point of almost bankrupting Israel’s main supplier of electricity. The government had to assume the debt, pay it down and in the end the Palestinians received the tax revenue anyway.

Ultimately, to say BDS is a legitimate form of peaceful protest is erroneous. BDS hides behind a façade of peaceful boycott; however, when you look under the surface it undermines the two-state solution and delegitimizes Israel’s right to a state. This can incite hate amongst Palestinians and can lead to the validation of unforgiveable actions, such as attacking and killing innocent civilians. BDS objectives only seek to hinder, not help the peace process.