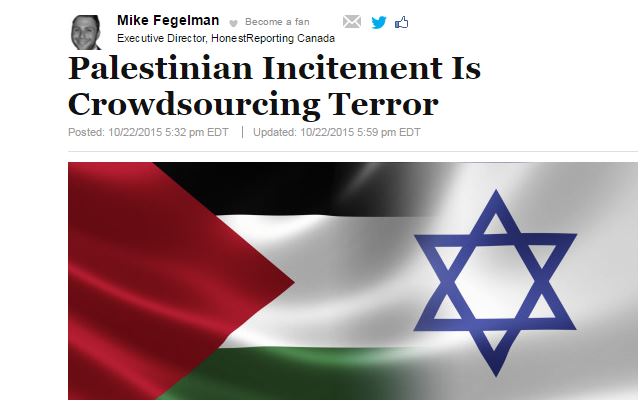 “Peace will come to the Middle East when the Arabs learn to love their children more than they hate us.”

These words spoken by former Israeli Prime Minister Golda Meir in 1996, ring especially true today as Israel faces an unrelenting wave of terror carried out largely by young Palestinians. An erudite thinker, Meir lamented that “we can forgive the Arabs for killing our children, but we cannot forgive them for forcing us to kill their children.”

In the past two weeks, Israel has borne the brunt of hundreds of terror attacks. In Jerusalem proper, Tel Aviv, Hadera and in areas of the west bank, Israelis have been brutally murdered and maimed. Stabbed with butcher’s knives, shot at, victims of stonings, Molotov cocktails, vehicle rammings and suicide bombings. The reaction by the international community, the United Nations, leading opinion makers and thought leaders in Canada’s media has been deafening silence and indifference to Israeli lives.

Terror doesn’t occur in a vacuum and terrorists are born from nurture, not nature. Fanning the flames and provoking this recent terror war is a sustained campaign of incitement to violence, indoctrination of hate and justification of terror that is being promoted and instilled in all facets of Palestinian society.

A culture of violence exists due to state-sanctioned Palestinian glorification of terrorism and incitement against Israel. Whether by the official institutions of the Palestinian Authority which honours terrorists killing Israeli civilians as “heroes,” whose school textbooks feature maps where Israel is purged from the region, and whose media call Jews “barbaric monkeys [and] wretched pigs,” Israel’s neighbours and supposed “partners for peace” are nurturing a climate of hatred against Israeli Jews.

Palestinian adolescents — weaned on blood libels — now play videogames where the goal is to kill and mutilate as many Jews as you can. On the internet, Palestinians terror meets Web 2.0 as YouTube videos instruct Palestinians on how to literally go for the jugular, and how to disembowel and decapitate Israelis with kitchen knives, much like ISIS is doing in Syria and Iraq.

Murder is being crowdsourced and so-called “lone wolf” Palestinians who are fed this steady diet of incitement are now slaughtering Israelis in cold blood.

The recent Palestinian terror attacks that killed four Israelis recently — two Israeli men who were stabbed to death in Jerusalem’s Old City and a Jewish couple gunned down in a drive-by shooting ambush in the west bank in full view of their four now orphaned children — were especially gruesome and traumatizing to Israeli society. While these attacks received some coverage by the mainstream media, what has largely been ignored is the fact that the official party of PA President Mahmoud Abbas, the Fatah movement, referred to the murder of this Israeli couple as being legal and a Palestinian “national duty”.

More troubling is that Abbas’ own Fatah movement claimed credit for this terror attack, and this fact alone may have serious repercussions not only for the Middle East peace process, but perhaps for Canadian, American and international aid to the Palestinians as the Oslo process stipulates a renunciation of Palestinian violence.

Israel contends that the recent series of attacks are the direct result of incitement by radical Islamist and terrorist elements which call on Palestinians to murder Jews and which spread the false and malicious claim that Israelis are taking over the Al Aqsa Mosque compound, despite Israel’s commitment to maintain the status quo arrangement on the Temple Mount in Jerusalem. The culture of hate in the Palestinian media, schools and social networks, together with the inflammatory statements made by Palestinian leaders, has reached new uncharted heights in recent days.

In Gaza, the Hamas terror group encourages suicide bombings and a third intifada saying “We call for escalating and deepening the intifada.” Meanwhile, a Muslim preacher in Gaza brandished a knife during a sermon encouraging Palestinians to step up their stabbing attacks on Israelis, declaring that they should “cut them into body parts.” This is the climate of hate that exists in the Palestinian territories.

And it was just a couple weeks ago that PA President Mahmoud Abbas gave an incendiary speech at the UN, which analysts saw was this Palestinian leader tacitly giving a green light for this wave of terror. In a speech on Palestinian TV onSeptember 16th, Abbas said “we bless every drop of blood spilled for Jerusalem. With the help of Allah, every shaheed (martyr) will be in heaven… Al-Aksa is ours and so is the Church of the Holy Sepulchre. They [Jews] have no right to desecrate them with their filthy feet.”

Importantly, the Palestinian Authority has not condemned these barbaric terror attacks and Abbas has stated that he supports “the defenders of Al Aqsa against the terrorist settlers.”

Instead of teaching kids peace, promoting tolerance, mutual respect and co-existence, Palestinian youth who are incited to hate are doing exactly they are taught: murdering innocents Jews.

As a result, peace is now only more elusive, the conflict protracted and the peace process is as moribund as ever. Without a doubt, more Israeli security measures will have to be implemented to safeguard Israeli lives which will ultimately curtail Palestinian movement.

A society and culture that glorifies Palestinian murderers as “martyrs” will never embrace the path to peace and accept Israel’s right to exist. For change to occur, from the grassroots up to the highest echelons of power, and from top down, Palestinians must take tangible steps to end the daily incitement that has led to the recent violence that we are witnessing.