HRC in Huffington Post: "10 Reasons Israel Is Not An ‘Apartheid’ State" 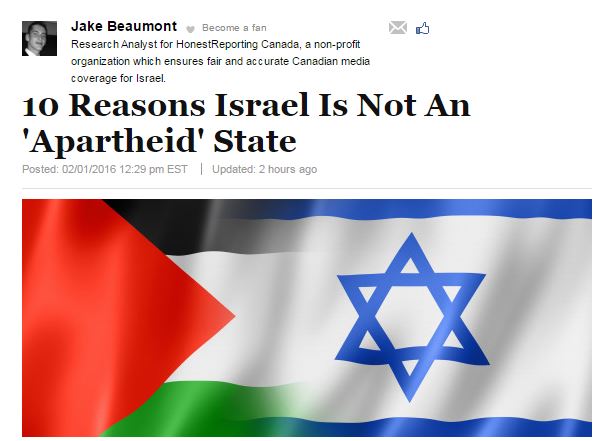 Tyler Levitan’s recent Huffington Post Canada op-ed entitled “Israel’s Actions In Palestine Are The Definition Of Apartheid” is a perfect example of how when baseless accusations are left unanswered, they risk becoming accepted as conventional wisdom.

Levitan’s libeling Israel as an “apartheid” state is wholly disingenuous and lacks substantive argumentation. As his preferred instrument of choice, Levitan employs empty rhetoric to blacken Israel’s name and to isolate it through boycott, divestment and sanctions campaigns.

The goal is to force Israel into making dangerous, one-sided concessions that make defensible borders porous and impossible to maintain. Ultimately, Levitan’s modus operandi serves to demonize and stigmatize Israel, to malign the Jewish state’s hard-fought reputation and to tarnish its standing in the community of nations.

As such, a full refutation of the “apartheid” libel must be stated for the record. For posterity purposes, here are 10 reasons why Israel is not an “apartheid” state:

1. All people living in Israel have full equal rights.

There are no inferior or second-class citizens, unlike non-whites in South Africa or minorities in Islamic or Arab countries. Moreover, Arabs occupy senior positions on the Israeli police force, the Knesset and the Israeli judiciary. For example, Salim Joubran, who currently serves on the Israeli Supreme Court, is a Christian Arab. South Africans living under apartheid could only dream of obtaining these types of positions.

Ishmael Khaldi, an Islamic Bedouin, is currently a diplomat in the Israeli Ministry of Foreign Affairs. Majalli Wahabi (Druze) was the acting president of Israel in 2007. These are just a few examples out of the many minority groups holding prominent positions in Israeli society.

2. An Arab judge, George Karra, sentenced an ex-Israeli president Moshe Katsav to prison for seven years.
When an Arab judge sentences a former Israeli president to jail — this is truly a testament to Israel’s equality amongst all citizens, regardless of race or ethnicity.

3. In 1953, the Bantu Education Act was passed.
This separated blacks from whites in the South African educational system. The government created a new curriculum for black people in which they were taught skills related to manual labour and serving in their Bantustans. In Israel, citizens are given equal opportunity in the workplace and educational department as evidenced by the fact that there are Palestinians and Arabs in Israeli universities who both study and teach as professors.

4. Incitement to racism is a criminal offence in Israel.
This is the polar opposite of apartheid in South Africa, whose government specifically passed incendiary racist legislation.

5. Arabs and Israelis receive the same treatment in hospitals.
The Hadassah Medical Organization which operates two hospitals in Jerusalem, was nominated for a Nobel Peace Prize due to its push for peace in the Middle East and its equal treatment of Palestinians and Israelis. Furthermore, Arab and Israeli children are born amongst each other in the same hospitals.

Even during Israeli-Palestinian conflicts, Palestinians receive top-of-the-line treatment in Israeli hospitals. During apartheid, blacks were specifically given limited access to health care.

6. Non-whites in South Africa had separate amenities.
These include hospitals, beaches, buses, restrooms, drinking fountains and even designated park benches to sit on. None of this discrimination is prevalent in Israel and a law prohibits discrimination in public places.

7. Israeli Arabs have their own political parties in the Knesset — some of whom are Israel’s harshest critics.
The Joint List is an example of this. They received 13 seats in the 2015 Israeli election. Furthermore Arabs have equal voting rights, whereas coloured people during apartheid were not allowed to participate in the political process.

8. Arab citizens are allowed to seek redress through the courts and government if they feel they have been wronged.
Arab citizens also receive trial based on the facts, not ethnicity. This is nothing compared to apartheid South Africa, where discrimination was authorized from the highest position in the government.

9. Arabs in Israel have more fundamental rights than other Islamic and Arab countries in the Middle East.
Ironically, they have more rights than they do in the Gaza Strip or the West Bank.

10. In Israel, there are 1.6 million Arab citizens integrated within Israeli society.
They make up 20 per cent of Israel’s population. There was no such integration in South Africa. Furthermore, according to a poll done by Harvard University, 77 per cent of Arab citizens living in Israel would rather live there than any other country in the world. If these citizens were experiencing “apartheid,” why are so many of them supportive of Israel?
To proclaim that Israel is an “apartheid state” is to undermine and trivialize the harsh and actual struggles many blacks went through during that dark time of human history. These are the words of many South Africans who would also concur that Israel is not an “apartheid” state.

Arabs have the right to move freely, vote, obtain an education, work in prominent positions, receive world-class health care, own land and speak freely. Blacks in South Africa had none of these rights.

Regardless of the unfounded criticisms, Israel will still strive in the face of growing adversity. Those who seek to delegitimize, malign and deprecate Israel have lost their moral compass.

While those who are able to discern the truth for themselves, are able to recognize the fact that Israel is a beacon of freedom and democracy in the Middle East.

12) Israeli Arabs have their own political parties in the Knesset – some of whom are Israel’s harshest critics. The Joint List is an example of this. They received 13 seats in the 2015 Israeli election. This is a testament to Israel’s vibrant democracy. Non-white South Africans were often tortured or killed for small political actions like peaceful protests.

13) It was written in Israel’s Declaration of Independence of May 14, 1948 that: “The State of Israel… will be based on the precepts of liberty, justice, and peace taught by the Hebrew Prophets; will uphold the full social and political equality of all its citizens, without distinction of race, creed or sex…” The concept of apartheid would go against the very legislation Israel is based upon. Furthermore, the declaration encourages Israeli Arabs to “participate in the upbuilding of the State on the basis of full and equal citizenship and due representation in all its provisional and permanent institutions.” Protests are allowed and actually are commonplace in Israel.  Many different ethnic groups protest and are well within the laws of doing so. Israel allows the freedom to protest and the freedom to congregate. During apartheid, blacks were specifically not allowed to protest, and the few protests that did happen, resulted in many deaths from police officers firing indiscriminately into the crowds. Furthermore, no officers were ever convicted in these massacres. In 2000, following the Second Intifada, the Israeli Cabinet set up the Or Commission, in which a report was created to review the discrimination experienced by Israel’s Arab Minority.  The report concluded that this discrimination ‘is the most sensitive and important domestic issue facing Israel today.’ Furthermore, as a result of the reports, eight policemen were reprimanded due to excessive violence.  This is empirical evidence that Israel has been making active efforts in addressing racial and economic inequality.

14) In South Africa, sex or marriage between whites and non-whites was prohibited – legislation was passed – the Immortality Act. There are many inter-racial relationships prevalent in Israel.

15) Israel recently okayed a $4 billion upgrade plan for its Arab communities. The 5-year plan will focus on housing and improved education.

17) According to a poll done by Harvard University, 77% of Arab citizens living in Israel would rather live in Israel than any other country in the world.  If these citizens were really experiencing “apartheid”, why are so many of them supportive of Israel? Furthermore, polls show that from 1,000 people polled, 83% of Arabs in Israel would not move to the west bank if a Palestinian state was created there.  Fifty-four percent of these respondents said that they’d rather live in the democratic state of Israel with higher living conditions.

18) The result of Israel’s acquiring land in the west bank in 1967 was due to Arab countries initiating an act of aggression – an attempt at genocide of the Israeli people – and Israel simply defended its people’s very right to exist.  Israel obtained these territories in defensive purposes. Even so, generous Israeli offers were made to give up various lands for peace (1967, 1978, 2000) – only to be met with Palestinian denial and rejectionism.  Furthermore, the west bank is not subjected to Israeli law, as per the Oslo Accords signed in 1993 by late Palestinian Leader Yasser Arafat.  Their courts, laws, taxes, police etc. are under Palestinian jurisdiction in the majority of the west bank, while Gaza is not “occupied” and is completely under the control of the Hamas terror organization.

19) Israel has made peace treaties with Jordan and Egypt which demonstrates its commitment to make calculated risks to achieve peace. The PA and Hamas, on the other hand, refuse to recognize Israel’s right to exist, making it harder for Israel to withdraw from territory, due to a denial for compromise and mutual acceptance. Furthermore, non-whites never sought the destruction of South Africa, rather the end of apartheid. The UN has recognized, endorsed and administered these Israeli peace agreements – giving these efforts international legitimacy.

20) Arabic is an official language in Israel, and there exists a thriving Arabic theatre and literature scene in Israel.

21) The freest Arabic media in the Middle East is in Israel. Apartheid signifies segregation; this is just representative of integration and equality. Government censorship of media was also a prevalent theme in South Africa.

22) There are no restrictions for Arabs or special privileges for Jews to lease private land in Israel, whereas Mahmoud Abbas, the leader of the PA in the west bank, has stated that “any Arab who sells land to a Jew should be put to death.” Furthermore, blacks in South Africa were only allowed to purchase land in their demarcated territories.

23) Signs in Israel are written in Hebrew, Arabic and English. If Israel is an “apartheid” state which, defined by most dictionaries means segregation and separation – why are they helping to accommodate their Arab population?

24) All religions in Israel are free to practice.  There are Muslims, Christians, Druze, Buddhists, Sikhs and Hindus living in Israel. There are mosques, churches and temples to accommodate people of all faiths. This is another example of tolerance and pluralism within Jewish society.