Read the commentary in full immediately below: 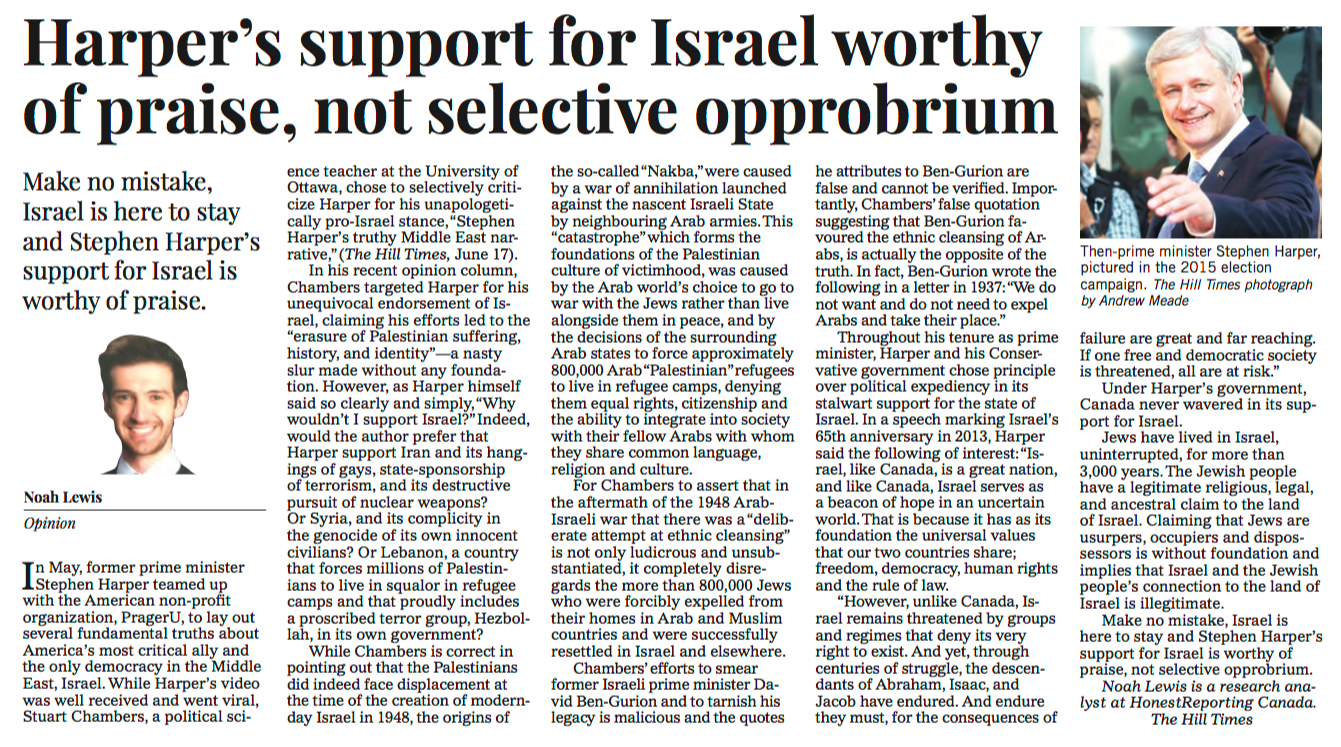 In May, former Prime Minister Stephen Harper teamed up with the American non-profit organization, PragerU, to lay out several fundamental truths about America’s most critical ally and the only democracy in the Middle East, Israel. While Mr. Harper’s video was well received and went viral, Stuart Chambers, a political science teacher at the University of Ottawa, chose to selectively criticize Harper for his unapologetically pro-Israel stance.

In his recent Hill Times commentary, Mr. Chambers targeted Harper for his unequivocal endorsement of Israel claiming his efforts led to the “erasure of Palestinian suffering, history and identity” – a nasty slur made without any foundation. However, as Harper himself said so clearly and simply, “Why wouldn’t I support Israel?” Indeed, would the author prefer that Harper support Iran and its hangings of gays, state-sponsorship of terrorism, and its destructive pursuit of nuclear weapons? Or Syria, and its complicity in the genocide of its own innocent civilians? Or Lebanon, a country that forces millions of Palestinians to live in squalor in refugee camps and that proudly includes a proscribed terror group, Hezbollah, in its own government? 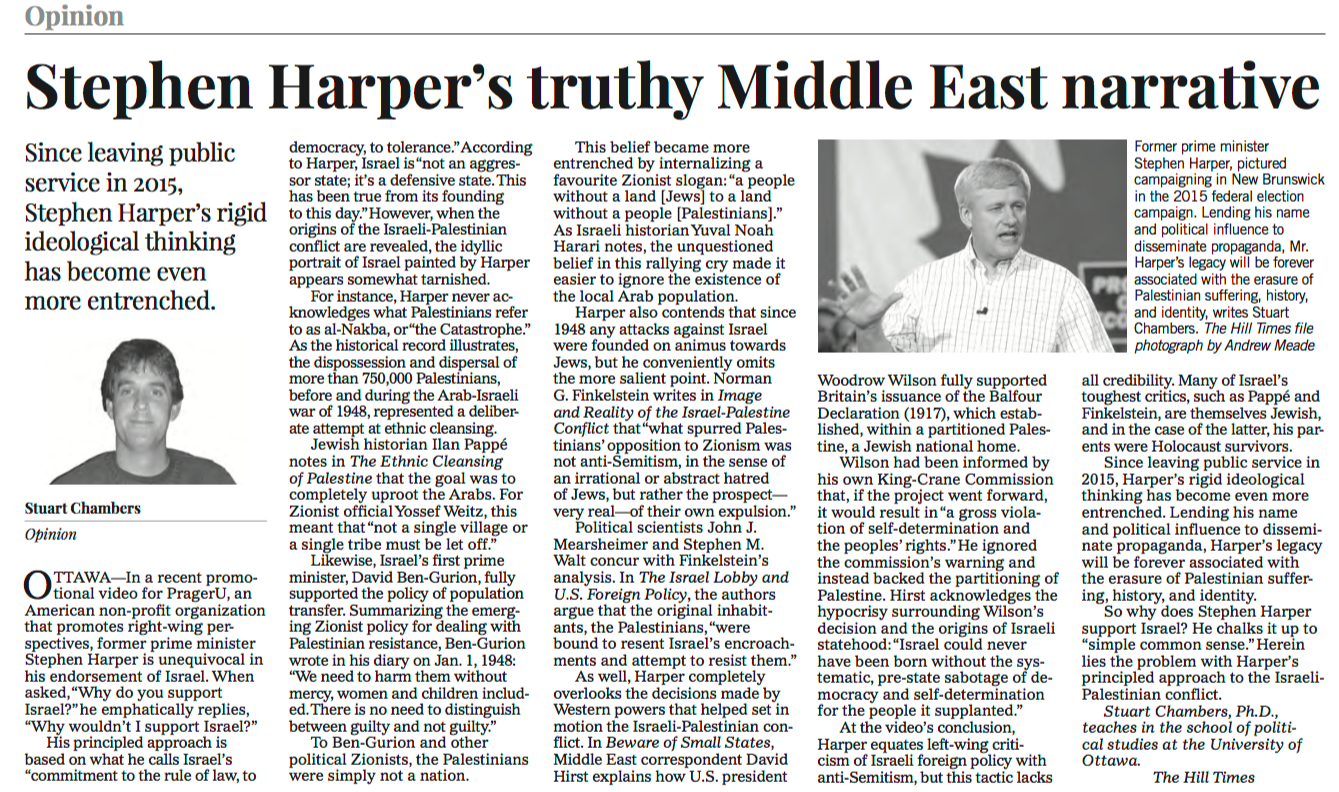 While Mr. Chambers is correct in pointing out that the Palestinians did indeed face displacement at the time of the creation of modern-day Israel in 1948, the origins of the so-called “Nakba,” were caused by a war of annihilation launched against the nascent Israeli state by neighbouring Arab armies. This “catastrophe” which forms the foundations of the Palestinian culture of victimhood, was caused by the Arab world’s choice to go to war with the Jews rather than live alongside them in peace, and by the decisions of the surrounding Arab states to force approximately 800,000 Arab “Palestinian” refugees to live in refugee camps, denying them equal rights, citizenship and the ability to integrate into society with their fellow Arabs with whom, they share common language, religion and culture.

For Mr. Chambers to assert that in the aftermath of the 1948 Arab-Israeli war that there was a “deliberate attempt at ethnic cleansing” is not only ludicrous and unsubstantiated, it completely disregards the over 800,000 Jews who were forcibly expelled from their homes in Arab and Muslim countries and were successfully resettled in Israel and elsewhere.

Stuart Chambers’ efforts to smear former Israeli Prime Minister David Ben-Gurion and to tarnish his legacy is malicious and the quotes he attributes to Ben-Gurion are false and cannot be verified. Importantly, Chambers’ false quotation suggesting that Ben-Gurion favoured the ethnic cleansing of Arabs, is actually the opposite of the truth. In fact, Ben-Gurion wrote the following in a letter in 1937: “We do not want and do not need to expel Arabs and take their place.”

Throughout his tenure as Prime Minister, Mr. Harper and his Conservative government chose principle over political expediency in its stalwart support for the State of Israel. In a speech marking Israel’s 65th anniversary in 2013, Harper said the following of interest:

Israel, like Canada, is a great nation, and like Canada, Israel serves as a beacon of hope in an uncertain world. That is because it has as its foundation the universal values that our two countries share; freedom, democracy, human rights and the rule of law.

However, unlike Canada, Israel remains threatened by groups and regimes that deny its very right to exist. And yet, through centuries of struggle, the descendants of Abraham, Isaac and Jacob have endured. And endure they must, for the consequences of failure are great and far reaching. If one free and democratic society is threatened, all are at risk.”

Under Harper’s government, Canada never wavered in its support for Israel. As then Minister of Citizenship, immigration and Multiculturalism and now current Premier of Alberta, Jason Kenney, meticulously put it this way at a gathering of Jews and pro-Israel advocates in Vancouver in 2013:

Prime Minister Harper was the first world leader in March of 2006 to announce an ending of all Canadian aid to the Palestinian Authority following the election of Hamas, in the PA elections in 2006. This is why Canada was almost alone in the civilized world in standing with Israel in July and August of 2006, following similar provocative rocket attacks from Hezbollah in southern Lebanon. It is why Prime Minister Harper stood up to Jacques Chirac and dozens of world leaders at the Francophonie Summit in October of 2006, who sought yet again to adopt a resolution scape-goating the Jewish state for defending its civilians. It’s why again and again, this Prime Minister and our Conservative government have taken these strong and principled actions, because recognizing the right of the Jewish people to their homeland and their right of that homeland to self-defense is fundamentally in-sync with Canada’s democratic values. It’s also in-sync with our interests because as our Prime Minister has said, those who seek to eliminate the Jewish people, ultimately, if allowed to, would seek to eliminate all of us.”

Make no mistake, Israel is here to stay and Stephen Harper’s support for Israel is worthy of praise, not selective opprobrium.