HRC In Hill Times: “Holocaust Denial, Distortion One of the Most Insidious Forms of Antisemitism”

In a full page commentary published in the Hill Times on November 2, HonestReporting Canada commented on the proliferation of online antisemitism, what Canada is doing and what social media companies must do to curb the volume and velocity of online bigotry, a hatred that tragically all too often turns into real-world violence.

The full commentary can be read appended below: 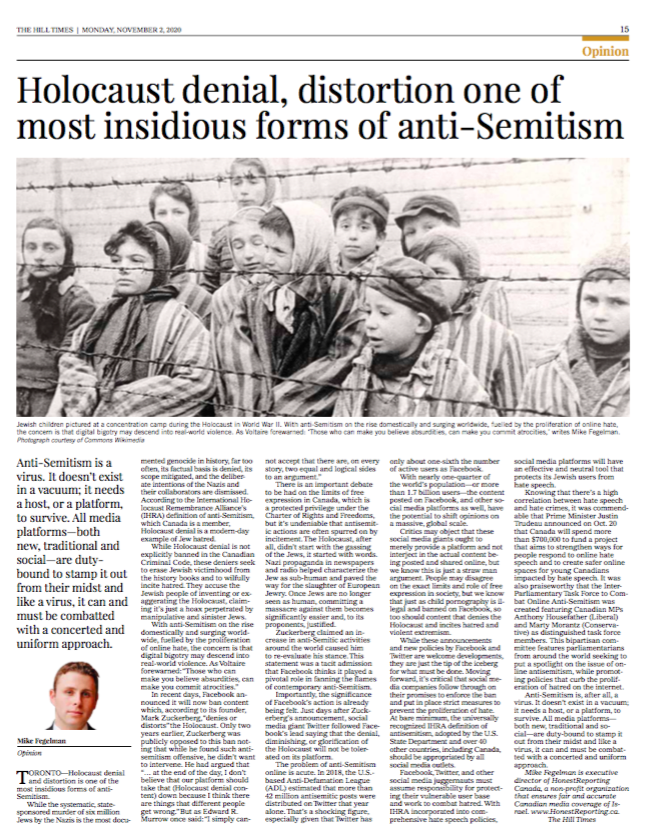 While the systematic, state-sponsored murder of six million Jews by the Nazis is the most documented genocide in history, far too often, its factual basis is denied, its scope mitigated, and the deliberate intentions of the Nazis and their collaborators are dismissed. According to the International Holocaust Remembrance Alliance’s (IHRA) Definition of Antisemitism, which Canada is a member, Holocaust denial is a modern-day example of Jew hatred.

While Holocaust denial is not explicitly banned in the Canadian Criminal Code, these deniers seek to erase Jewish victimhood from the history books and to wilfully incite hatred. They accuse the Jewish people of inventing or exaggerating the Holocaust, claiming it’s just a hoax perpetrated by manipulative and sinister Jews.

With antisemitism on the rise domestically and surging worldwide, fueled by the proliferation of online hate, the concern is that digital bigotry may descend into real-world violence. As Voltaire forewarned: “Those who can make you believe absurdities, can make you commit atrocities.”

In recent days, Facebook announced it will now ban content which, according to its founder, Mark Zuckerberg, “denies or distorts” the Holocaust. Only two years earlier, Zuckerberg was publicly opposed to this ban noting that while he found such antisemitism offensive, he didn’t want to intervene. He had argued that “… at the end of the day, I don’t believe that our platform should take that (Holocaust denial content) down because I think there are things that different people get wrong.” But as Edward R. Murrow once said: “I simply cannot accept that there are, on every story, two equal and logical sides to an argument.”

There is an important debate to be had on the limits of free expression in Canada, which is a protected privilege under the Charter of Rights and Freedoms, but it’s undeniable that antisemitic actions are often spurred on by incitement. The Holocaust, after all, didn’t start with the gassing of the Jews, it started with words. Nazi propaganda in newspapers and radio helped characterize the Jew as sub-human and paved the way for the slaughter of European Jewry. Once Jews are no longer seen as human, committing a massacre against them becomes significantly easier and, to its proponents, justified.

Zuckerberg claimed an increase in antisemitic activities around the world caused him to re-evaluate his stance. This statement was a tacit admission that Facebook thinks it played a pivotal role in fanning the flames of contemporary antisemitism.

Importantly, the significance of Facebook’s action is already being felt. Just days after Zuckerberg’s announcement, social media giant Twitter followed Facebook’s lead saying that the denial, diminishing, or glorification of the Holocaust will not be tolerated on its platform.

The problem of antisemitism online is acute. In 2018, the US-based Anti-Defamation League (ADL) estimated that more than 42 million antisemitic posts were distributed on Twitter that year alone. That’s a shocking figure, especially given that Twitter has only about one-sixth the number of active users as Facebook.

With nearly one-quarter of the world’s population – or over 1.7 billion users – the content posted on Facebook, and other social media platforms as well, have the potential to shift opinions on a massive, global scale.

Critics may object that these social media giants ought to merely provide a platform and not interject in the actual content being posted and shared online, but we know this is just a strawman argument. People may disagree on the exact limits and role of free expression in society, but we know that just as child pornography is illegal and banned on Facebook, so too should content that denies the Holocaust and incites hatred and violent extremism.

While these announcements and new policies by Facebook and Twitter are welcome developments, they are just the tip of the iceberg for what must be done. Moving forward, it’s critical that social media companies follow through on their promises to enforce the ban and put in place strict measures to prevent the proliferation of hate. At bare minimum, the universally recognized IHRA definition of antisemitism, adopted by the U.S. State Department and over 40 other countries, including Canada, should be appropriated by all social media outlets.

Facebook, Twitter and other social media juggernauts must assume responsibility for protecting their vulnerable user base and work to combat inciteful hatred. With IHRA incorporated into comprehensive hate speech policies, social media platforms will have an effective and neutral tool that protects its Jewish users from hate speech.

Knowing that there’s a high correlation between hate speech and hate crimes, it was commendable that Prime Minister Trudeau announced on October 20 that Canada will spend over $700,000 to fund a project that aims to strengthen ways for people respond to online hate speech and to create safer online spaces for young Canadians impacted by hate speech. It was also praiseworthy that the Inter-Parliamentary Task Force to Combat Online Antisemitism was created featuring Canadian MP’s Anthony Housefather (Liberals) and Marty Morantz (Conservatives) as distinguished task force members. This bipartisan committee features parliamentarians from around the world seeking to put a spotlight on the issue of online antisemitism, while promoting policies that curb the proliferation of hatred on the internet.

Antisemitism is, after all, a virus. It doesn’t exist in a vacuum; it needs a host, or a platform, to survive. All media platforms – both new, traditional and social – are duty-bound to stamp it out from their midst and like a virus, it can and must be combatted with a concerted and uniform approach.