In The Hamilton Spectator today, Honest Reporting Canada countered an absurd comparison of #Israel to #Iran. As we stated in our commentary: “Irrespective of whether or not Israel possesses nuclear weapons, it’s simply absurd to equate democratic Israel with the terror-supporting, Holocaust-denying theocratic Iranian regime.”

Our full commentary can be found online by clicking here or per below: 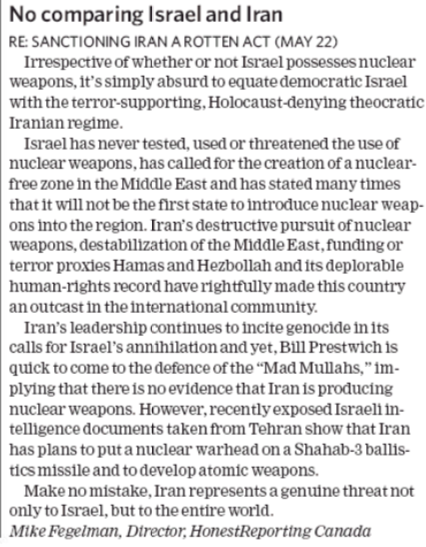 No comparing Israel and Iran

RE: Sanctioning Iran a rotten act (May 22)

Irrespective of whether or not Israel possesses nuclear weapons, it’s simply absurd to equate democratic Israel with the terror-supporting, Holocaust-denying theocratic Iranian regime.

Israel has never tested, used or threatened the use of nuclear weapons, has called for the creation of a nuclear-free zone in the Middle East and has stated many times that it will not be the first state to introduce nuclear weapons into the region. Iran’s destructive pursuit of nuclear weapons, destabilization of the Middle East, funding or terror proxies Hamas and Hezbollah and its deplorable human-rights record have rightfully made this country an outcast in the international community.

Iran’s leadership continues to incite genocide in its calls for Israel’s annihilation and yet, Bill Prestwich is quick to come to the defence of the “Mad Mullahs,” implying that there is no evidence that Iran is producing nuclear weapons. However, recently exposed Israeli intelligence documents taken from Tehran show that Iran has plans to put a nuclear warhead on a Shahab-3 ballistics missile and to develop atomic weapons.

Make no mistake, Iran represents a genuine threat not only to Israel, but to the entire world.