HRC In Globe and Mail: “Old Assumptions About Middle East Peace Have Been Shattered” 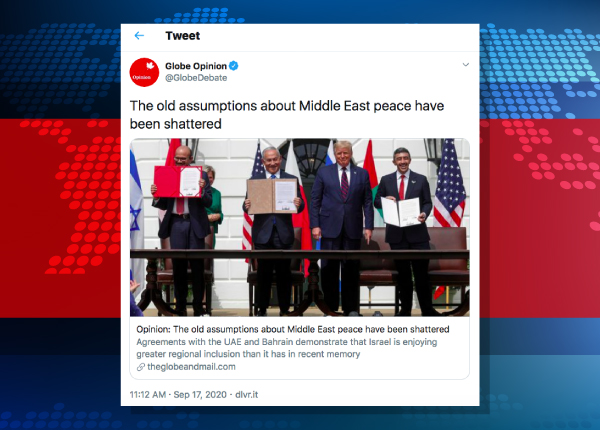 In The Globe and Mail today, ⁦Honest Reporting Canada⁩ Executive Director Mike Fegelman examines the historic significance of the Abraham Accords, its impact on the future of Mideast diplomacy and its implications for the Palestinians.

The full op-ed  can be found on the Globe’s website or appended below:

The year 2020 will undoubtedly be remembered as one for the history books. A deadly pandemic, a global recession and widespread social upheaval in our southern neighbour will likely be the most memorable events of this year. But no less significant is what is happening in the Middle East, where in the past month alone, two tiny Arab states have announced peace agreements with Israel, the first countries in the region to do so in almost three decades.

In early August, Israel and the United Arab Emirates (under the auspices of the United States) announced the Abraham 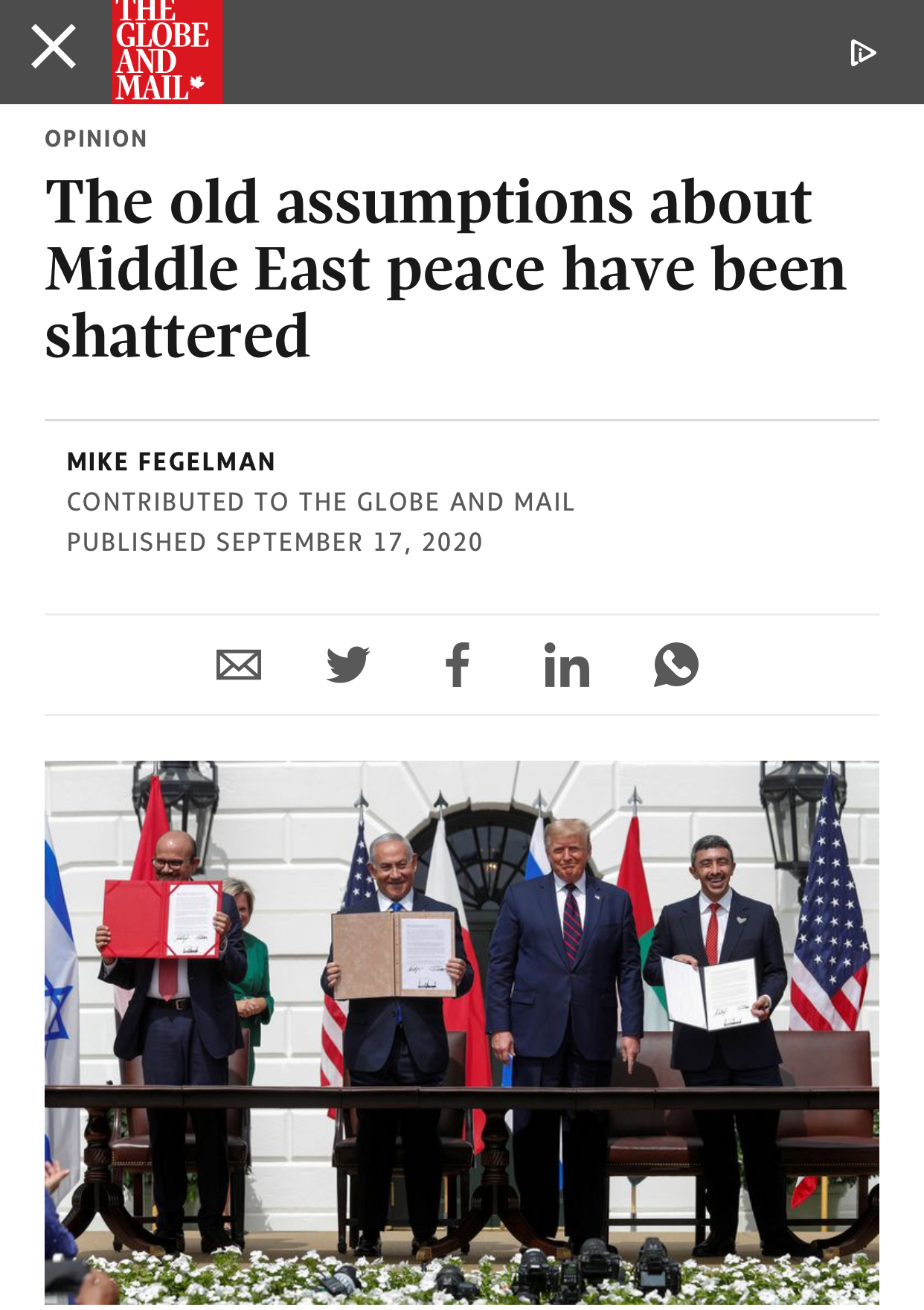 Accords, a peace agreement that opened the way for the two countries to enjoy greater economic co-operation and interaction between their peoples.

These agreements are significant for a number of reasons, which are not often fully made clear in the daily headlines.

First, these agreements demonstrate that Israel, far from being the pariah it’s often described as being, is in fact enjoying greater regional inclusion and diplomatic relations than it has in recent memory. While Israel’s relations with Persian Gulf states such as the UAE and Bahrain have been open secrets for a number of years, these agreements are now very much out in the open and are being celebrated by their governments and citizens alike. Israel is clearly not the poisoned chalice it once was – or at least as it was regularly characterized.

These peace agreements also show that Iran’s malignant and dangerous influence in the region is not going unnoticed. Canada severed its relations with Iran in 2012 largely because of the Islamic Republic’s ongoing support for terrorism, including arming, training and funding Hezbollah in Lebanon and Syria, in addition to its indescribably horrific treatment of its own people, which includes hanging homosexuals and summary executions, like that of wrestler Navid Afkari. Through its proxies in the region, Iran aims to spread its influence throughout the Shia crescent, an area stretching from Lebanon to Iran with a majority of Shia Muslims, like the Islamic Republic’s predominant population. With Iran exporting its weapons and ideology across the region, the largely Sunni Arab states in the Persian Gulf, like Israel, recognize it as the largest geopolitical threat they face.

The growing list of Arab states announcing peace deals with Israel ultimately shows that the rules that governed Middle East diplomacy for decades simply aren’t based on objective reality. Standard diplomatic thinking has posited that peace between Israel and the Palestinians was the first step in securing a larger peace between Israel and her neighbours throughout the Middle East. Clearly, that’s not the case. Israel is a growing regional power, a technological powerhouse, a scientific innovator and a beacon of liberal democratic values that even monarchies such as the UAE and Bahrain clearly see as a model to emulate – or at the very least engage with in fruitful partnership.

And lastly, what has become abundantly clear is that the Palestinian cause is no longer top of mind for Arab states in the region. For many years, the Palestinian cause was a sacrosanct pillar of Arab nationalism and a cause célèbre for Middle Eastern heads of government. And yet today, while Arab leaders no doubt maintain sympathy for the Palestinian people, they have grown tired of the intransigence of Palestinian leaders and their stubborn refusal to negotiate in good faith with Israel.

The old assumptions about Middle East peace have been shattered. Arab states throughout the Gulf may have been pushed to grudgingly accept Israel by virtue of Iran’s malicious regional influence, but Israel’s vibrancy has made them embrace peace with their erstwhile enemy. These Arab states have brought their acceptance of Israel out of the shadows and are increasingly unafraid to declare their willingness to open full relations with the Jewish State. In a year of pain, uncertainty and challenges for countless people around the world, the Middle East has proven to be a bright spot of 2020.