They’re at it again. 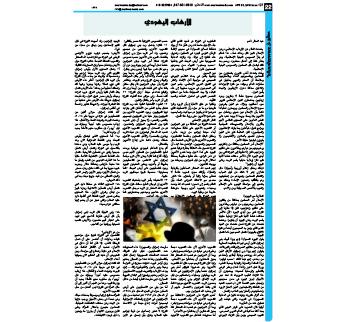 Meshwar, an Arabic-language newspaper headquartered in Mississauga, has drawn the ire of Jewish groups for an article that labels Judaism as a terrorist religion and says killing is ingrained in the Jewish faith.

The article appeared in the newspaper’s April edition and is a reprint of an item that appeared previously in Al Jazeera. The article was first reported in the Elder of Zion blog and picked up by Honest Reporting Canada.

“This is the same publication that praised the Har Nof synagogue massacre in which four rabbis and a police officer were murdered,” said Mike Fegelman, executive-director of Honest Reporting Canada.

“A police complaint has already been filed by the Centre for Israel and Jewish Affairs (CIJA) over that editorial.”

“With content like this freely distributed to its claimed 4,000 readers in Ontario, it’s no surprise that Toronto Police released findings in March, which noted that Jews are the most targeted group for hate crimes in the city,” Fegelman added.

Len Rudner, director of community relations and outreach of CIJA, said the organization has already made four separate complaints to police hate crime authorities in Peel Region over anti-Jewish content in Meshwar.

One concerned a cartoon depicting Israeli Prime Minister Benjamin Netanyahu drinking the blood of Palestinian children. Another arose from a November 2014 editorial that praised the Har Nof terrorist attack in Israel. Yet another was in response to an August 2014 editorial that denied the Holocaust, he said.

Rudner said CIJA hadn’t yet had the most recent item translated, but “if the description that has been provided through Honest Reporting is accurate, we feel there may be grounds to file another complaint with Peel Regional Police.”

Jonathan Halevi has been following Meshwar and the writings of its editor, Nazih Khatatba, for some time. Halevi, who reads Arabic, said the article builds on traditional Islamic doctrine, which sees Judaism as a corruption of the ancient Islamic faith of the patriarchs.

The article refers to the ancient warrior, Joshua, and said the concept of killing others is well entrenched in the Jewish faith. He also compared the ancient Israelites to events in Gaza today, Halevi said.

It condemned Judaism for its treatment of women and said Jews see gentiles as unclean and vile, Halevi said.

“The article takes [biblical] quotes from here and there and compares [them] to Israel today.

“This is rubbish. [The author] really doesn’t understand Judaism. He misquotes what was said and builds a theory around it. It’s a very low level of argument. But it’s part of the line of the newspaper in demonizing Israel and demonizing Judaism.”

Halevi, who served in the Israeli intelligence service, said he had written about Meshwar on his blog, Alternative Angle, and about Khatatba, who is also a board member of Palestine House.

Halevi noted that Khatatba praised the Har Nof massacre, and called it “an attack with several innovative tactics culminating in the courageous and qualitative al-Quds operation, which was carried out by two Palestinians in a Jewish synagogue.”

Khatatba went on to describe the massacre as “self-defence and rescue for the Palestinian people,” Halevi noted on his blog.

The CJN contacted Khatatba, but he said he was “too busy” for an interview. 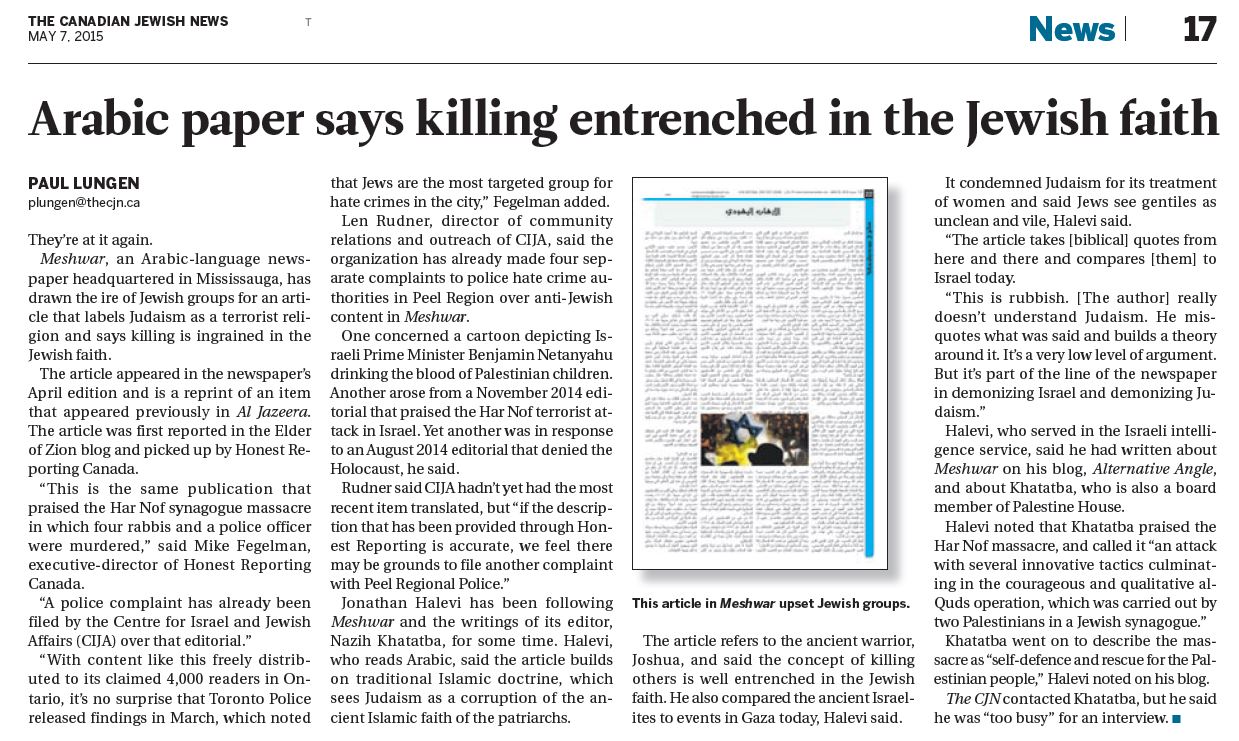