Mideast analyst Jonathan Spyer was in Toronto last week addressing the transformational changes in the Middle East, and was joined by several panelists including HRC’s Executive Director, Mike Fegelman. The CJN provides a summary of the event which you can read below:

TORONTO — The Middle East is witnessing “a change of profound importance” in which U.S. power is being eclipsed by a regional coalition led by Iran. At the same time, Sunni powers led by Saudi Arabia, feeling abandoned by their U.S. patron, are pushing back.

That was the assessment of Mideast analyst Jonathan Spyer, who last week addressed a business lunch lecture sponsored by the Speakers Action Group at the law offices of 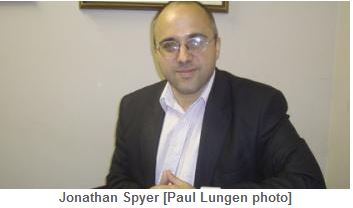 The Middle East is undergoing a transformational change in which an Iran-led bloc is “pushing forward” while American influence in the region is waning. “This is a change of profound importance,” said Spyer, senior research fellow at the Global Research in International Affairs Center in Herzliya, Israel.

The once-expected fall of Syrian strongman Bashir Assad has failed to materialize as thousands of Shia fighters have poured into the country from Lebanon, Iraq and Iran to prop up his regime. The Sunni rebels have been pushed back, and “no one talks about Assad’s fall. Nothing is imminent,” Spyer said.

At the same time, former Egyptian president Hosni Mubarak was forced to resign while the United States encouraged elections based on “a happy and irrationally naive conception of what the Muslim Brotherhood was.”

U.S. allies “are terrified” at this turn of events, wondering why they should reside under the American umbrella when they could be so readily abandoned. “The King of Saudi Arabia above all others was terrified by this process,” he said.

With the United States on the sidelines, the Abdel Fattah el-Sisi coup in Egypt took power back from the Muslim Brotherhood. “Undoubtedly this coup was a Saudi production” contrary to American desires. “It is an astonishing turn of events,” Spyer said. “They feel their patron is no longer willing or able to defend their interests.”

As for Israel, it continues to maintain security co-operation with the United States, despite “disastrous” American diplomacy in the region.

“Our friends are behaving with inexplicable strangeness in terms of their relations with the region. It is bizarre and it must stop.”

To counteract declining American influence, Israel is forging new relationships with China and India. “There is a burgeoning security relationship with India” accompanied by growing trade ties.

Israel is well placed, both economically and socially, to deal with the new threats in the region. “I fear more for the Christian minorities in the Middle East than for Israel. The Christians do not have a structure [like Israel] to protect them,” Spyer said.

Currently, in the Middle East, a single arc of conflict stretches from the Mediterranean all the way to Yemen.

“Ultimately, what all this is about is the failures of Arab states,” in particular their inability to address issues of socio-economic development and political progress important to local populations.

In the midst of all this Islamic in-fighting, Israel remains largely a “spectator.” It finds itself “next door to a massive historical process, likely in its early stages.” Israel is a powerful state with the tools to defend itself, including its armed forces and a buoyant economy.

“But this will be the challenge for Israel for the decade or two to come.”

Responding to Spyer’s analysis, Raza traced the roots of the Mideast’s sectarian conflicts back centuries and said, “There is no chance for the conflict to end soon.”

No regime is going to allow its sectarian rivals to have power, especially now that the United States is negotiating with Iran. Shia jihadis are pouring into Syria from across the world, including some from Canada.

Fegelman said the Syrian conflict poses difficult problems for the media. It is hard to get into the country and it’s extremely dangerous once you are there. It’s also very difficult for the press to determine which reports from Syria are accurate and which are propaganda.

In addition, “there is a certain media fatigue” in covering the war, leading to a “bias by omission.”

One story not being told concerns the plight of Palestinian refugees in Syria’s Yarmouk camp, “who are starving to death.” You’d think advocates of the Palestinian cause would be publicizing that story, he said.

From 85 to 96 Palestinians have died of starvation and illness in the camp since mid-2013, according to media reports.

Thompson said Al Qaeda is following a well-established blueprint in the Syrian war by bringing in foreign volunteers – including Canadians – training and indoctrinating them, exposing them to violence, and then sending them back to their countries of origin.

However, the Assad regime has been pretty successful in killing the Al Qaeda jihadis. “They’re not coming back,” he added.

Spyer said Al Qaeda now controls a significant chunk of territory on the Syria-Iraq border, posing a threat that Israel must address.

Israel’s Shin Bet internal security service recently broke up an Al Qaeda cell based in Jerusalem, which was preparing to leave for Turkey and then go on to Syria.

“It’s a new challenge,” he said. “We’ll be dealing with it for some time to come.”