On November 10, the Canadian Jewish News covered HRC’s expose of the McGill Daily’s censoring pro-Zionist opinions from their student paper.

The article by reporter Janice Arnold entitled: “Outrage after McGill Daily confirms ban of Zionist opinion” can be found immediately below, along with a copy of the print version of the article. Additionally, the Jewish Telegraph Agency and The Tower.org produced coverage of HRC’s efforts on November 16 & 17.

A student who lodged a complaint of anti-Jewish bias with her student union against the McGill Daily is appalled at the independent student newspaper’s response.

On Nov. 7, the paper’s editorial board published a statement in connection with Molly Harris’s complaint to the Students’ Society of McGill University’s (SSMU) equity committee and following a meeting of two of its editors with Harris and a second complainant.

Harris’s complaint, made in July, was about “a set of virulently anti-Semitic tweets from a McGill Daily writer” and her belief that a “culture of anti-Semitism” pervades the publication and prevents pro-Israel opinions from being heard.

The editorial board states that, while it “takes allegations of anti-Semitism seriously… we found that [the complaint] largely rested on the conflation of anti-Zionism and anti-Semitism, which we understand to be distinct from one another.

“The Daily maintains an editorial line of not publishing pieces which promote a Zionist worldview, or any other ideology which we consider oppressive.”

In her Facebook reaction immediately afterward, Harris described the meeting with the editors at the end of October as having had “very little to do with Zionism, but rather about the excuses that their editors have used time and time again to stop articles that represent Jewish voices that don’t align with their own from being published.”

Nevertheless, she left the meeting hopeful that the editors did recognize that they held Jewish students to a different standard in selecting articles and were amenable to “promot[ing] a more positive and safer space for important discussions of Judaism, Zionism and the Arab-Israeli conflict.”

Harris, a third-year student, works on the student-run McGill student magazine, the Bull & Bear. In August, her opinion piece – “So you’re a Jew and you’re starting college? Prepare for anti-Zionism” – was published in the Washington Post. She warned that freshmen should expect to encounter anti-Israel sentiment and possibly anti-Semitism, often from social justice organizations.

At McGill, Harris said she has been called a “Zionist b—-” and told several times that Jews have not suffered historically and can’t be considered an oppressed group.

“When I asked if a student publication would write about instances of anti-Semitism on campus in its end-of-year issue, I was told that those issues were already covered in ‘mainstream Zionist media,’” she wrote.

The board’s statement has left her “disappointed, shocked, angry, but at the end of the day, not particularly surprised… My faith in the Daily is completely shot at this point – clearly this publication has no interest in giving a voice to all minorities, only the ones that work for them at any given moment,” she wrote on Facebook.

The SSMU equity committee tries to mediate complaints related to alleged breaches of the university’s policy of equality.

On Nov. 8, HonestReportingCanada (HRC) condemned the Daily’s anti-Zionist policy, calling it censorship and “hateful, discriminatory and antithetical to free speech and fair and balanced journalism.” The organization is dedicated to defending Israel against bias in the Canadian media.

On Nov. 9, Hillel McGill weighed in, calling the Daily’s stance “an egregious violation of the most fundamental journalistic ethics,” noting that the Quebec Press Council code of ethics stipulates that public contributions may not be rejected by media organizations on the grounds of ideological bias.

Hillel finds it “outrageous” that the Daily board not only has no Jewish or pro-Israel members, but several who are pro-BDS activists.

“The Daily’s opposition to pro-Israel discourse in its pages perpetuates the toxic and divisive climate that has surrounded this issue on campus,” Hillel posted on Facebook.

The Daily, founded in 1911, cites a circulation of 11,000 for its weekly print edition. It publishes online throughout the week.

Its board also stated that it will make its editorial guidelines more precise, “so that contributors have a clearer understanding of what we will and will not publish.” It said it will take part in workshops offered by the Jewish community in order to be better informed about anti-Semitism.

The board says it is committed in the future to “covering more issues relating to the Montreal Jewish community. It also acknowledges that the current editorial board has no Jewish members” who could provide perspective.

Jewish students have long claimed that the Daily refuses to publish content supportive of Israel and, in particular, opposing the boycott, divestment and sanctions campaign. They have been particularly frustrated by its apparent indifference to their concern that this issue is creating tensions on campus.

The current academic year got off to discouraging start for pro-Israel students when the Daily on Sept. 26 ran a satirical piece headlined: “White tears increase on campus.” Some students felt it mocked their concern about anti-Semitism.

Written by “Phar Dabdoub,” the article poked fun at white students worried about divisive politics on campus and imagined the SSMU general assembly adopting a motion to set up a “safe place” for BIPOC [black, indigenous and people of colour] students, that subsequently fails in an online ratification.

Last winter, a pro-BDS resolution was passed at a general assembly, but was rejected in an online referendum open to all students.

The Daily balked at running a response to this article by those who felt offended by it, telling the authors that it would be consulting Treyf, which bills itself as “a debatably Jewish podcast,” on the McGill radio station. Its hosts are anti-Zionist, according to their critics.

The Daily editorial board addressed this matter in its Nov. 7 statement, expressing contrition and vowing to prevent it happening again.

“We acknowledge that the conflation of whiteness and Jewishness implied in the article is harmful. While this was not our intention, the effect was perpetuating the homogenization of Jewish identities, and we acknowledge our wrongdoing.”

“The McGill Daily’s refusal to give a platform to pro-Zionist commentaries has racist dimensions and xenophobic overtones as the viewpoints of Jewish students… and supporters of Israel (avowed Zionists) are deemed persona non grata,” HRC executive director Mike Fegelman said in a press release.

“Jewish nationalism should never be a forbidden topic in the McGill Daily for those who want to advocate and educate the masses about Zionism.”

This policy fans hatred and will “intimidate, stigmatize and silence” Jewish and pro-Israel students, he said.

The BDS resolution, brought by the McGill BDS Action Network, was adopted in February at a general assembly.

In May, the SSMU judicial board issued a statement that BDS and similar motions that call for campaigns against a single nation are contrary to the union’s constitution and equity policy, which protects students of all origins.

Concurrently, the SSMU board of directors decided to invalidate the results of the online ratification process because the Judicial Board had upheld complaints from the pro-BDS side that SSMU regulations had been violated. Campaigning leading up to an online ratification is proscribed, as is the involvement of “external groups.”

The SSMU board has not ratified the Judicial Board reference on the constitutionality of BDS motions. Although a reference is considered an “advisory opinion,” it is customary for the SSMU’s highest governing body to state its position in such instances. 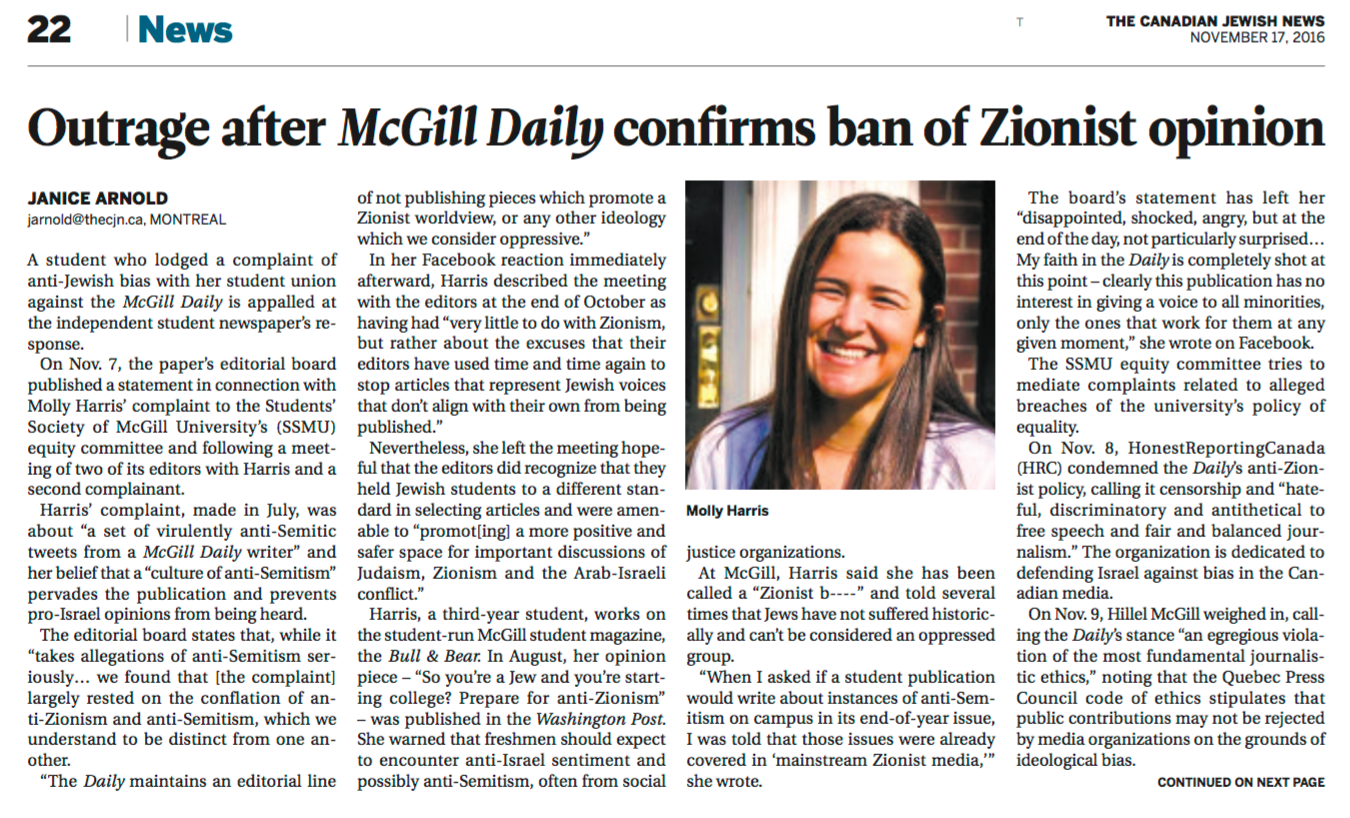 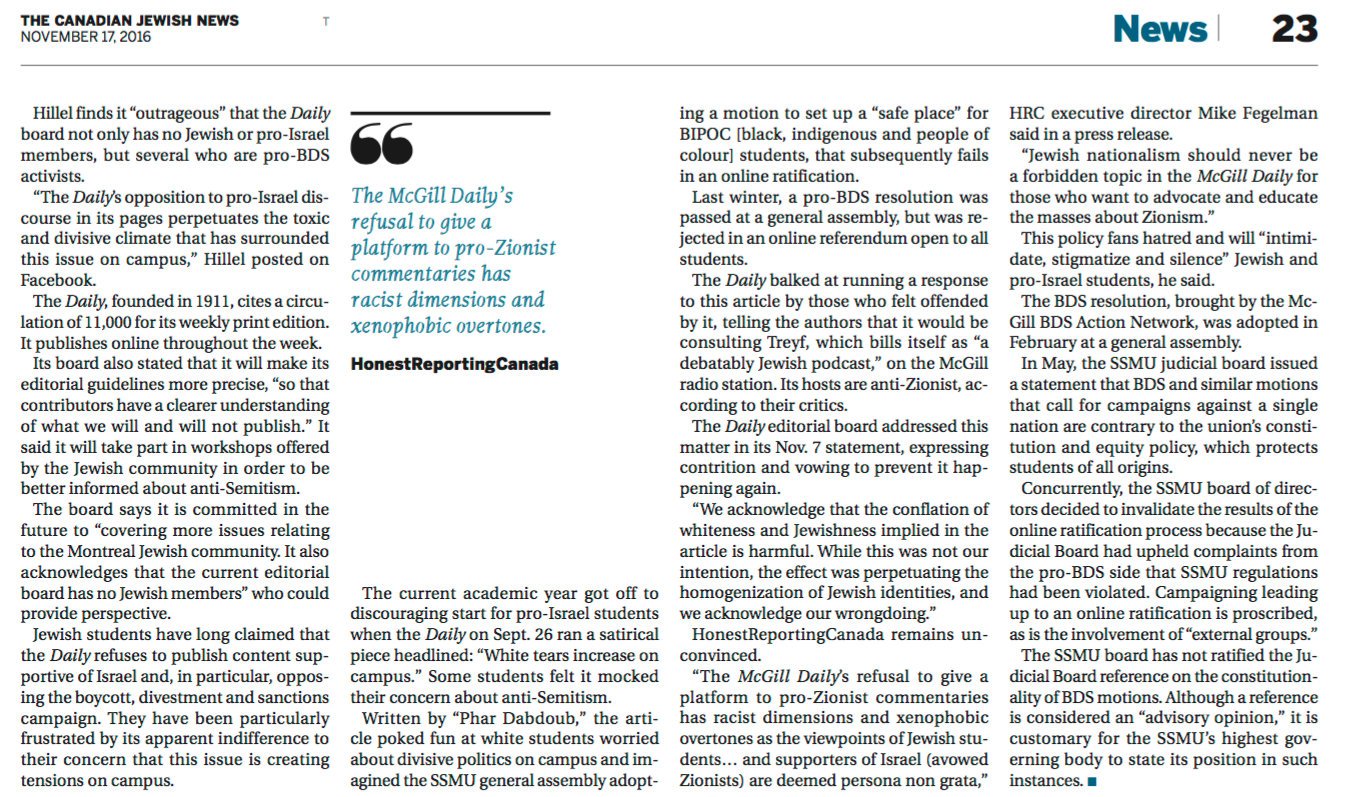 War of Words: How Hamas Manipulated the Media...

WATCH: Why Does The World’s Lone Jewish State...

The Real Story of Israel’s Relations with the...

Why the Media Keeps Getting the Jerusalem Story...

Water diplomacy: How Israel is using the Dead...