HRC In Canadian Jewish News: “Hezbollah Must Be Stopped”

In the Canadian Jewish News this week, HRC Executive Director Mike Fegelman calls on Canada and the international community to put a stop to Hezbollah’s nefarious efforts, specifically its efforts to develop precision guided missiles that can be fired anywhere, at anytime, with devastating accuracy. 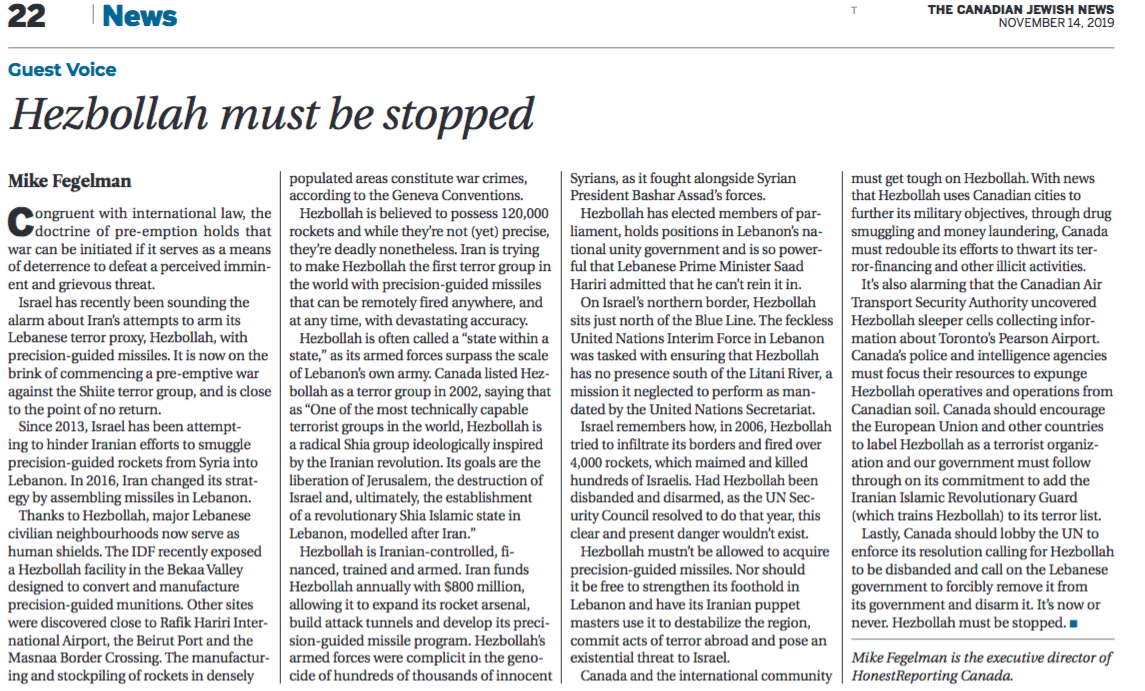 Congruent with international law, the doctrine of pre-emption holds that war can be initiated if it serves as a means of deterrence to defeat a perceived imminent and grievous threat.

Israel has recently been sounding the alarm about Iran’s attempts to arm its Lebanese terror proxy, Hezbollah, with precision-guided missiles. It is now on the brink of commencing a pre-emptive war against the Shiite terror group, and is close to the point of no return.

Since 2013, Israel has been attempting to hinder Iranian efforts to smuggle precision-guided rockets from Syria into Lebanon. In 2016, Iran changed its strategy by assembling missiles in Lebanon.

Thanks to Hezbollah, major Lebanese civilian neighbourhoods now serve as human shields. The IDF recently exposed a Hezbollah facility in the Bekaa Valley designed to convert and manufacture precision-guided munitions. Other sites were discovered close to Rafik Hariri International Airport, the Beirut Port and the Masnaa Border Crossing. The manufacturing and stockpiling of rockets in densely populated areas constitute war crimes, according to the Geneva Conventions.

Hezbollah is believed to possess 120,000 rockets and while they’re not (yet) precise, they’re deadly nonetheless. Iran is trying to make Hezbollah the first terror group in the world with precision-guided missiles that can be remotely fired anywhere, and at any time, with devastating accuracy.

Hezbollah is often called a “state within a state,” as its armed forces surpass the scale of Lebanon’s own army. Canada listed Hezbollah as a terror group in 2002, saying that as “One of the most technically capable terrorist groups in the world, Hezbollah is a radical Shia group ideologically inspired by the Iranian revolution. Its goals are the liberation of Jerusalem, the destruction of Israel and, ultimately, the establishment of a revolutionary Shia Islamic state in Lebanon, modelled after Iran.” 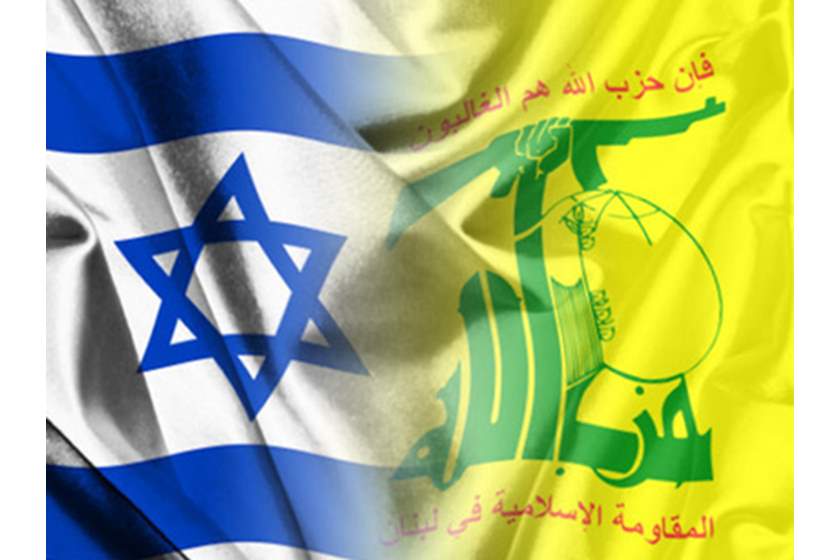 Hezbollah is Iranian-controlled, financed, trained and armed. Iran funds Hezbollah annually with $800 million, allowing it to expand its rocket arsenal, build attack tunnels and develop its precision-guided missile program. Hezbollah’s armed forces were complicit in the genocide of hundreds of thousands of innocent Syrians, as it fought alongside Syrian President Bashar Assad’s forces.

Hezbollah has elected members of parliament, holds positions in Lebanon’s national unity government and is so powerful that Lebanese Prime Minister Saad Hariri admitted that he can’t rein it in.

On Israel’s northern border, Hezbollah sits just north of the Blue Line. The feckless United Nations Interim Force in Lebanon was tasked with ensuring that Hezbollah has no presence south of the Litani River, a mission it neglected to perform as mandated by the United Nations Secretariat.

Israel remembers how, in 2006, Hezbollah tried to infiltrate its borders and fired over 4,000 rockets, which maimed and killed hundreds of Israelis. Had Hezbollah been disbanded and disarmed, as the UN Security Council resolved to do that year, this clear and present danger wouldn’t exist.

Hezbollah mustn’t be allowed to acquire precision-guided missiles. Nor should it be free to strengthen its foothold in Lebanon and have its Iranian puppet masters use it to destabilize the region, commit acts of terror abroad and pose an existential threat to Israel.

Canada and the international community must get tough on Hezbollah. With news that Hezbollah uses Canadian cities to further its military objectives, through drug smuggling and money laundering, Canada must redouble its efforts to thwart its terror-financing and other illicit activities.

It’s also alarming that the Canadian Air Transport Security Authority uncovered Hezbollah sleeper cells collecting information about Toronto’s Pearson Airport. Canada’s police and intelligence agencies must focus their resources to expunge Hezbollah operatives and operations from Canadian soil. Canada should encourage the European Union and other countries to label Hezbollah as a terrorist organization and our government must follow through on its commitment to add the Iranian Islamic Revolutionary Guard (which trains Hezbollah) to its terror list.

Lastly, Canada should lobby the UN to enforce its resolution calling for Hezbollah to be disbanded and call on the Lebanese government to forcibly remove it from its government and disarm it. It’s now or never. Hezbollah must be stopped.

Mike Fegelman is the executive director of HonestReporting Canada.