Following the release of our August 12 alert on how the Hamilton Spectator published an op-ed calling for Israel’s destruction, the Canadian Jewish News covered this incident and our continued efforts in the following article: 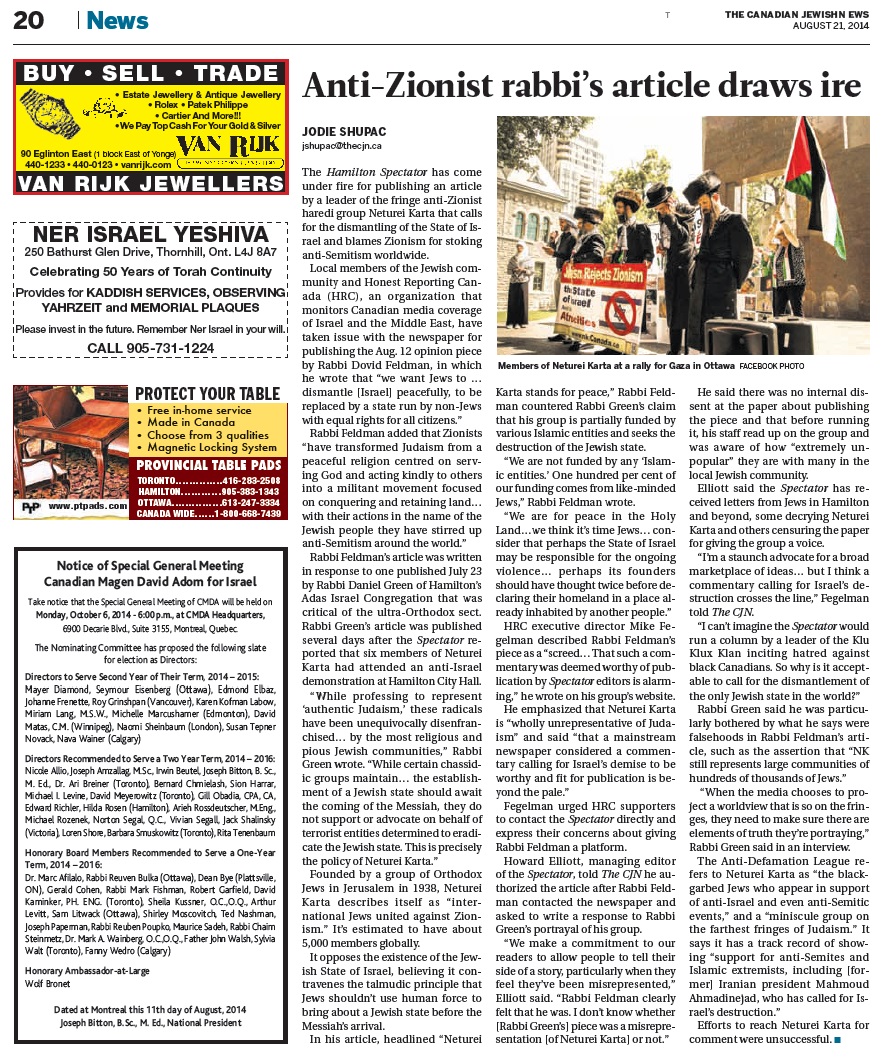 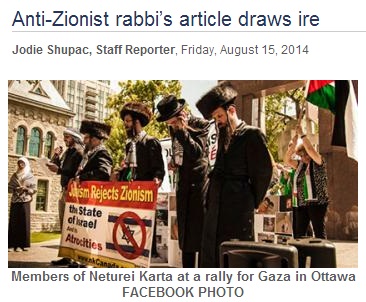 The Hamilton Spectator has come under fire for publishing an article by a leader of the fringe anti-Zionist haredi group Neturei Karta that calls for the dismantling of the State of Israel and blames Zionism for stoking anti-Semitism worldwide.

Local members of the Jewish community and Honest Reporting Canada (HRC), an organization that monitors Canadian media coverage of Israel and the Middle East, have taken issue with the newspaper for publishing the Aug. 12 opinion piece by Rabbi Dovid Feldman, in which he wrote that “we want Jews to …dismantle [Israel] peacefully, to be replaced by a state run by non-Jews with equal rights for all citizens.”

Rabbi Feldman added that Zionists “have transformed Judaism from a peaceful religion centred on serving God and acting kindly to others into a militant movement focused on conquering and retaining land… with their actions in the name of the Jewish people they have stirred up anti-Semitism around the world.”

Rabbi Feldman’s article was written in response to one published July 23 by Rabbi Daniel Green of Hamilton’s Adas Israel Congregation that was critical of the ultra-Orthodox sect. Rabbi Green’s article was published several days after the Spectator reported that six members of Neturei Karta had attended an anti-Israel demonstration at Hamilton City Hall.

“While professing to represent ‘authentic Judaism,’ these radicals have been unequivocally disenfranchised… by the most religious and pious Jewish communities,” Rabbi Green wrote. “While certain chassidic groups maintain… the establishment of a Jewish state should await the coming of the Messiah, they do not support or advocate on behalf of terrorist entities determined to eradicate the Jewish state. This is precisely the policy of Neturei Karta.”

Founded by a group of Orthodox Jews in Jerusalem in 1938, Neturei Karta describes itself as “international Jews united against Zionism.” It’s estimated to have about 5,000 members globally.

It opposes the existence of the Jewish State of Israel, believing it contravenes the talmudic principle that Jews shouldn’t use human force to bring about a Jewish state before the Messiah’s arrival.

In his article, headlined “Neturei Karta stands for peace,” Rabbi Feldman countered Rabbi Green’s claim that his group is partially funded by various Islamic entities and seeks the destruction of the Jewish state.

“We are not funded by any ‘Islamic entities.’ One hundred per cent of our funding comes from like-minded Jews,” Rabbi Feldman wrote.

“We are for peace in the Holy Land…we think it’s time Jews… consider that perhaps the State of Israel may be responsible for the ongoing violence… perhaps its founders should have thought twice before declaring their homeland in a place already inhabited by another people.”

HRC executive director Mike Fegelman described Rabbi Feldman’s piece as a “screed… That such a commentary was deemed worthy of publication by Spectator editors is alarming,” he wrote on his group’s website.

He emphasized that Neturei Karta is “wholly unrepresentative of Judaism” and said “that a mainstream newspaper considered a commentary calling for Israel’s demise to be worthy and fit for publication is beyond the pale.”

Fegelman urged HRC supporters to contact the Spectator directly and express their concerns about giving Rabbi Feldman a platform.

Howard Elliott, managing editor of the Spectator, told The CJN he authorized the article after Rabbi Feldman contacted the newspaper and asked to write a response to Rabbi Green’s portrayal of his group.

“We make a commitment to our readers to allow people to tell their side of a story, particularly when they feel they’ve been misrepresented,” Elliott said. “Rabbi Feldman clearly felt that he was. I don’t know whether [Rabbi Green’s] piece was a misrepresentation [of Neturei Karta] or not.”

He said there was no internal dissent at the paper about publishing the piece and that before running it, his staff read up on the group and was aware of how “extremely unpopular” they are with many in the local Jewish community.

Elliott said the Spectator has received letters from Jews in Hamilton and beyond, some decrying Neturei Karta and others censuring the paper for giving the group a voice.

“I’m a staunch advocate for a broad marketplace of ideas… but I think a commentary calling for Israel’s destruction crosses the line,” Fegelman told The CJN.

“I can’t imagine the Spectator would run a column by a leader of the Klu Klux Klan inciting hatred against black Canadians. So why is it acceptable to call for the dismantlement of the only Jewish state in the world?”

Rabbi Green said he was particularly bothered by what he says were falsehoods in Rabbi Feldman’s article, such as the assertion that “NK still represents large communities of hundreds of thousands of Jews.”

“When the media chooses to project a worldview that is so on the fringes, they need to make sure there are elements of truth they’re portraying,” Rabbi Green said in an interview.

The Anti-Defamation League refers to Neturei Karta as “the black-garbed Jews who appear in support of anti-Israel and even anti-Semitic events,” and a “miniscule group on the farthest fringes of Judaism.” It says it has a track record of showing “support for anti-Semites and Islamic extremists, including [former] Iranian president Mahmoud Ahmadinejad, who has called for Israel’s destruction.”

Efforts to reach Neturei Karta for comment were unsuccessful.