HRC in Algemeiner: “It’s Time to Acknowledge Reality: The Middle East Is Changing” 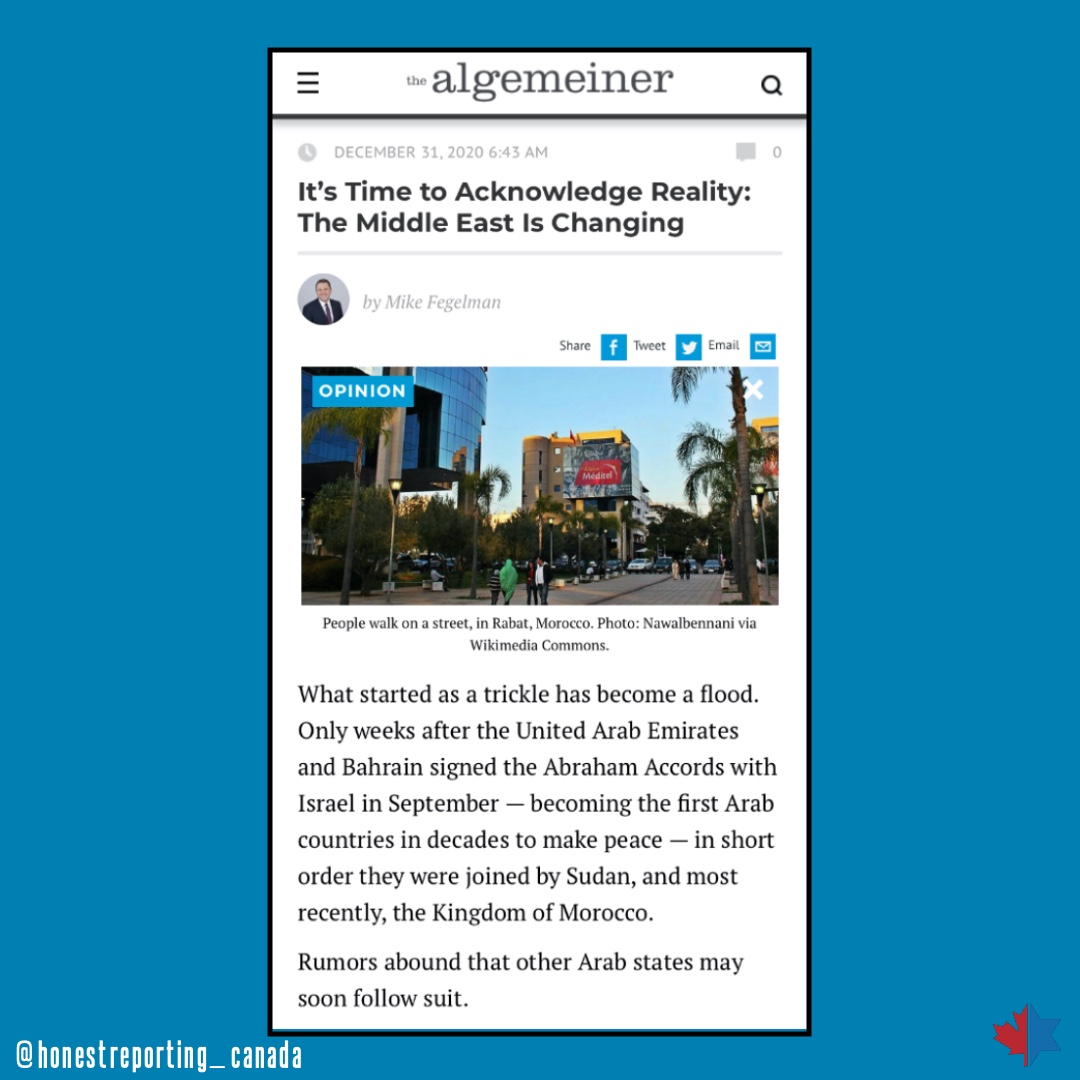 Read our commentary on the Algemeiner’s website or immediately below.

What started as a trickle has become a flood. Only weeks after the United Arab Emirates and Bahrain signed the Abraham Accords with Israel in September — becoming the first Arab countries in decades to make peace — in short order they were joined by Sudan, and most recently, the Kingdom of Morocco.

Rumors abound that other Arab states may soon follow suit.

Why is this a breakthrough? The previous status quo ante saw peace agreements and a potential detente between Israel and neighboring Arab states put on hold because of the mistaken diplomatic theory that solving the conflict between Israel and the Palestinians was the key to unlocking comprehensive regional peace.

This concept, known as “linkage,” never gained traction. Further, not only did it fail to propel Mideast peace, it protracted it, resulting in today’s moribund peace process. The impact of this flawed peacemaking paradigm gave the intransigent Palestinian Authority a veto that prevented a rapprochement between Israel and the broader Arab world.

Media critics and news pundits may point out that while Egypt and Jordan — two Arab states which Israel signed peace agreements with in 1979 and 1994 respectively — had actually gone to war with the Jewish state, Morocco and Israel never engaged in open warfare. Thus, they say, it could be viewed less as a shattering of the deadlock in the Middle East, and more as making official what was previously an open secret.

While there’s some merit to this critique, it fundamentally misses the wider significance of these recent peace deals.

For more than 70 years, Israel has been castigated by its enemies as a pariah state, depicted as the single largest obstacle to peace in the Middle East and put on the receiving-end of Boycott, Divestment, and Sanctions (BDS) campaigns. Although there’s tragically no shortages of conflict in the Middle East — from Iran’s proxy wars, to the Houthi rebellion in Yemen, to the Syrian civil war — the Arab-Israeli conflict has, by far, captured the most attention and focus among diplomats, the news media — and by extension, the wider public in Canada and the US, and throughout the world.

The disproportionate focus paid to the Arab-Israeli conflict has become a self-fulfilling prophecy. While there are many other conflicts in the region, if enough media attention is focused on a tiny slice of it, this conflict will inevitably become more significant as a result. But that means that each and every peace agreement signed between Israel and an Arab country takes on an added level of significance, even if they have never been belligerent warring opponents. Much to the chagrin of the Palestinian Authority and its like-minded bedfellows in Iran, Syria, and elsewhere in the Levant who lamented this breakthrough, the news of the recent peace agreements — especially with Morocco — formalizes an existing reality and serves as a potential harbinger of positive things to come.

Unlike Bahrain or the United Arab Emirates, Morocco is geographically and culturally distinct from the Gulf petro-states. It’s a former French colony with an established Jewish population, and a country that’s a bridge between Europe and Africa. Additionally, with more than 37 million citizens — comparable to Canada — and in an area larger than Alberta, Morocco is by far the most populous and consequential of the countries to recently establish relations with Israel.

Morocco was once home to one of the largest Jewish populations in the Arab world and North Africa; however, after Israel’s War of Independence in 1948 and the increasing persecution as a result, the Jews of Morocco fled to Europe, the US and North America, and Israel.

Thanks to this peace deal, there will be direct flights transporting Jews of Moroccan origin and Israeli tourists to and from Morocco, with an estimated 50,000 Israelis who travel annually to Morocco to visit their ancestral homeland. Israel and Morocco’s restoration of bilateral ties and diplomatic relations will see the immediate opening of liaison offices in Rabat and Tel Aviv, and the eventual opening of embassies. The agreement also hopes to promote innovative relationships in economic and technological fields. Additionally, Morocco will be the first Arab nation to teach Jewish history and culture in school curricula, in a country where Islam is the state religion.

With Morocco signing onto peace with Israel — and with others potentially coming next — the Middle East is rapidly changing. Israel is no longer seen as the single biggest obstacle to peace in the region.

While the Middle East increasingly throws off the shackles of outdated thinking when it comes to Israel, those parties who profit and benefit from instability and conflict — namely Iran, Hezbollah, Hamas, and other Islamist terror groups — will continue to sow discord and attempt to erode any further progress or peace agreements between Israel and its neighbors.

Peace between any two countries is always a positive development, all the more so when it’s between Israel and an Arab state. Although the news media is free to critique any deficiencies when it comes to these agreements, the bigger picture should not be forgotten: that if a peace deal is being condemned by some of the Middle East’s worst human rights abusers, then it’s probably worth celebrating and not downplaying.